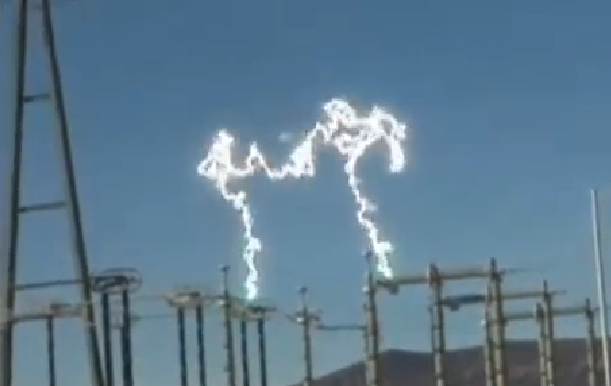 The overload resulted from a power surge from North Sea wind parks when winds picked up a bit. What is unusual in this case, however, is that there was no storm present and the overload was caused by normal wind fluctuations. Thus the incident illustrates the increasing volatility of wind as a power supply, even under regular weather conditions.

It turns out that intervening in power grids to avert a widespread power supply breakdown is nothing new in Germany. NDR writes that nowadays power engineer Stefan Hackbusch at the grid’s control center in Northern German increasingly has to intervene even when there are even moderate breezes. The north German public radio media outlet writes: “Because of the strong growth in wind park installations, the power grid up north is at its limits.”

As winds pick up with little warning, engineers at control centers constantly have to keep a close eye out and be ready to act at a minute’s notice and intervene if the power surges (or drops) to dangerous limits. To prevent overloading of the grid, control centers often have to shut down wind parks until the power supply moves into a safe range. These unplanned wind park shutdowns are occurring more and more often, NDR writes. “Switching off has become much more frequent the workers at the control center confirm. Transformer stations in Schleswig-Holstein had to have their output reduced 50,000 times in May – a record.”

Not only is grid stability a problem, but “waste power” is also growing astronomically, NDR writes, citing the Bundesnetzagentur (German Network Agency), that 555 gigawatt-hrs of renewable power went unused in 2013 because of overloading and the surplus had to be discarded. The trend of “waste electricity” is skyrocketing, NDR writes. According to the provisions of Germany’s EEG renewable energy feed-in act, waste electricity still needs to be paid for, which means that consumers foot a bill for something that is never delivered. Consumers are also required to pay for the electricity that doesn’t get produced when a wind park gets shut down. Wind park operators get paid whether they feed in or not.

One solution for the German grid overloading from the uncontrollable wind and sun sources would be to vastly expand the German national power grid so that wind power produced near the North and Baltic seas power could get transmitted to the industrial south, where demand is big. But here too the costs of building the such transmission power lines are astronomical and permitting entails a bureaucratic mess. Moreover political opposition against these lines is mounting rapidly. Experts say that the earliest, most optimistic completion date for a major power transmission expansion is 2022. This however is now looking totally unrealistic, as pie in the sky.

With the German grid often becoming hopelessly overloaded and with no real expansion in sight, the future looks bleak for wind and solar power systems suppliers. With no place to send the power, there’s no need for new installations. Orders and contracts for new projects have been drying up and wind and solar companies are now being hit hard.