NOAA conflict of interest? “The problem is that the same staff responsible for creating reports and running some greenhouse models are also responsible for the databases that validate the forecasts.”

The National Oceanic and Atmospheric Administration (NOAA) June 2015 results are out and once again the government-directed institute is  claiming the globe is at a record high temperature while the other independent global temperature datasets are telling a very different story.

The NOAA claims that the global surface temperature reached a new all-time record high with an anomaly +0.88°C – the warmest since recordkeeping began in 1880!

However measurements taken by satellite Remote Sensing Systems (RSS) show that although June 2015 indeed was a warm month at +0.39°C, it was only the 4th warmest June ever, and more than 30 other earlier months have seen greater positive anomalies.

Satellite data (revised) taken by the University of Alabama in Huntsville UAH show that the June 2015 temperature anomaly was +0.31°C, a warm month but not the hottest June ever as three other June months were as warm or warmer.

Moreover plots of the RSS and UAH data continue to show that global temperatures have been flat for now close to 20 years: 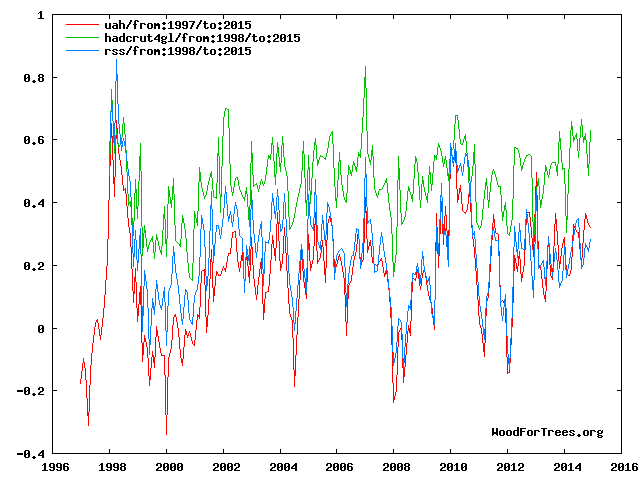 Even the Hadley Climate Research Unit (HadCrut) in England shows no temperature increase over the period.

Yet no one at the NOAA has gotten the idea that maybe their data and results have gone awry and that they’d be wise to look for what is causing it.

When asked what they thought of the NOAA June result, 2 expert meteorologists suggest that there’s probably more to it than faulty computational methodology and that it may have to do with scientists milking out the results they want.

When asked about the NOAA results, former Accuweather veteran meteorologist and now chief meteorologist at Weatherbell Analytics Joe Bastardi expressed serious doubts on the NOAA June results. In an e-mail he commented:

“NCEP real time data, computed every 6 hours from model input shows no such thing. It is available to the public at weatherbell.com/temperature.php. […] How is it the NCEP data, where NCEP is a part of NOAA, show no such warming? […]Moreover using NCEP data May, 2015, was the NINTH warmist, not the first, and June looks like 5th since 1998.” 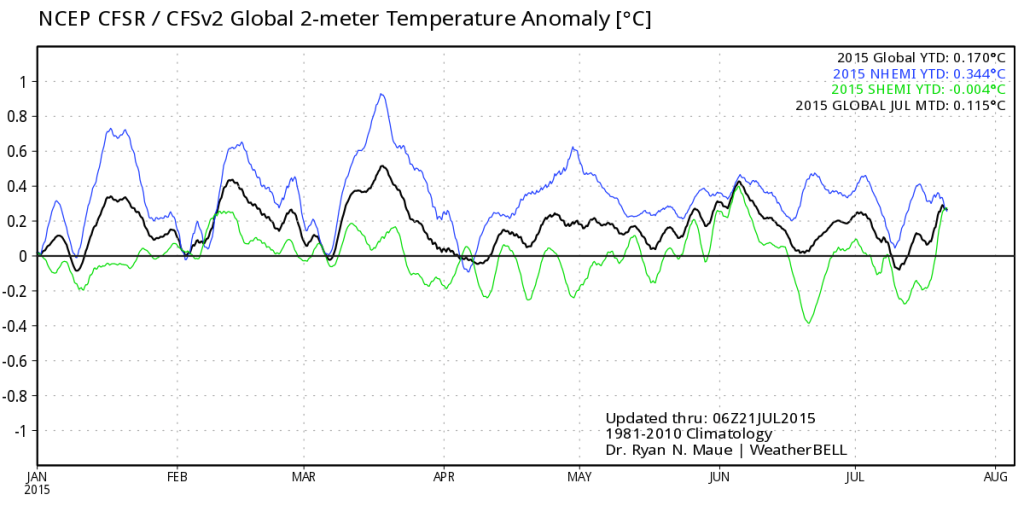 Long-time meteorologist Joe D’aleo was more blunt about the suspicious NOAA data, writing that there’s probably on conflict of interest where the climate modelers also happen to be the data-crunchers. D’Aleo wrote in reply to an e-mail inquiry (my emphasis):

“The problem is that the same staff responsible for creating the reports about the climate (USGCRP, State of the Climate, EPA TSD, IPPC) and running some of the greenhouse models that project the scary scenarios (NOAA and downstream NASA) are also responsible for the databases that validate the forecasts. The actual data should be constructed independently of the forecasts with people who do not have a financial and personal interest in seeing their forecasts verify. Indeed we see in the independent datasets like the satellite and balloon based ones, widespread model failures.

There is a lot of control available for modelers to predict a desired result, and data source inconsistencies allow NOAA to be creative – and the result is a hybrid of data and models (with their adjustments like TOA, infilling and homogenization) to show whatever the puppet-masters in government require. It may be that some really believe in their science and work hard to mine the data, achieving a form of bias confirmation. In other cases it is ideologically or politically driven or a matter of job security.”no