Note: This has been updated to a sticky post (hence the dark background). New posts are below.

Former NOAA meteorologist David Dilley has submitted an essay below that has 2 parts: 1) How the government has been starving researchers who hold alternative opinions of funding, and 2) climate cycles show we are starting a cooling period.

Suppressing the Truth – the Next Global Cooling Cycle

For over 15 years an inordinate proportion of government and corporate research grants have been awarded to universities for a single specific purpose: to prove human activities and the burning of fossil fuels are the main driving mechanisms causing global warming.

Unfortunately agendas by strong arm politics and the suppression of contrary views have become the primary tools used to manipulate the media, local and state governments (and in turn the general public) into believing what they want us to believe.

Many former research department heads, such as Dr. Reid Bryson (known as the Father of Climatology), openly state that research grants are driven by politics, and in order to receive a government grant you have to play the game. Topics for grants go with the political wind.

In the mid 1990s government grants were typically advertised in such a way to indicate that conclusions should show a connection to human activity as the cause for anthropogenic global warming. The result: most of the research published in journals became one-sided and this became the primary information tool for media outlets.

According to some university researchers who were former heads of their departments, if a university even mentioned natural cycles, they were either denied future grants, or lost grants. And it is common knowledge that United States government employees within NOAA were cautioned not to talk about natural cycles. It is well known that most university research departments live or die via the grant system. What a great way to manipulate researchers in Europe, Australia and the United States.

Not only governments manipulate, but so do some universities in order to protect their grants. A perfect example happened in 2012 when I contacted the Eagle Hill Institute in Steuben Maine USA to see if they would be interested in a climate change lecture. It should be noted that the institute has very close ties with the University of Maine. So I indicted that my lecture would involve information on natural climate cycles, and they responded saying, “That is fine.” Then In May of 2013 they asked me to speak at their lecture series on June 29th – an invitation that I accepted. They even consequently advertised the event and posted it on their online calendar.

All seemed well as I prepared for the lecture. But then came the manipulation and suppression of views. Just four days prior to the lecture, three people from the University of Maine viewed our web site (www.globalweatheroscillations.com). The next morning, just 3 days prior to the June 29th lecture, I received an email from Eagle Hill stating that my “lecture is canceled due to a staffing shortage”. Upon checking their web site, the calendar did show my lecture as being canceled, but carried the notation that “we hope to have a different lecture on the 29th”.

So what happened with the staffing shortage? A news service called “The Maine Wire“ interviewed the President of Eagle Hill, and he said that the University of Maine “felt some people in the audience may be uncomfortable hearing Mr. Dilley’s lecture”.

What did they want to hide from the public?

The IPCC and most anthropogenic believers want to maintain the belief that global warming during the past 100 years has been caused by human activity alone, and this is why most of their climate talks and lectures do not even mention prior global warming cycles.

The politically driven United Nations IPCC and United States global warming ruse will likely end up being one of the greatest scandals of the 21st century. If left unchecked it will continue to lead the world down a dangerous path that could jeopardize the lives of millions of people. Many have been led to believe the earth is heading into catastrophic global warming. Is this a political ruse, and will it likely blindside governments within the next few years? When it comes to climate, history does repeat itself.

Alternating global warming and cooling cycles have historically occurred and ended like clockwork every 220 to 230 years, with nearly 4000 cycles occurring during the past half million years. The last global cooling cycle began around 1795, or about 220 years ago. If the time clock strikes on time as it has over and over again throughout history, the upcoming cooling cycle has already begun in the Arctic and Antarctic, as shown in my video, “Is Climate Change Dangerous?” 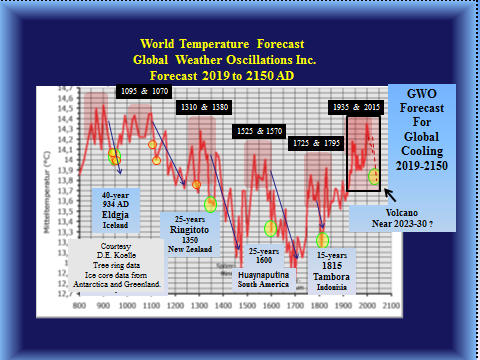 Earth has experienced 5 global cooling cycles during the past 1,000 years (soon to be 6). The initial 20 to 40 years of a new global cooling cycle are historically the coldest period, and associated with the most rapid cooling (see attached graphic). If a large volcanic eruption occurs during this period, large amounts of sulfur dioxide will be emitted into the atmosphere with the cooling cycle being exacerbated by sulfate aerosols floating in the upper atmosphere (www.cas.org/science-connections/volcano). The sulfate aerosols are highly reflective and can cool the earth for 1 to 3 years, with the end result being a year of no summer in some regions of the world.

Of the past 5 cooling cycles dating back to 900 AD, 4 were associated with strong volcanic eruptions during the initial 15 to 25 years of the cooling cycles. The volcanic explosive index (VEI) for these eruptions were between 5 and 7 on a VEI scale ranging from 1 to 8. The last occurrence was in 1815, when VEI 6 Tambora erupted. The combination of this massive volcanic eruption occurring some 15 to 20 years into the new global cooling cycle was instrumental in causing the year of no summer in 1816. During the next several years, nearly one third of Europe perished from famine, plague and civil unrest. Back then the earth had a population of 1 billion to feed; today there are 7 billion.

Shouldn’t governments around the world be preparing for a major event that is by far more dangerous than any warming cycle could possibly be?