Browse: Home / 2015 / September / 01 / Video Recorded By Drone Drives Home The Wind Park Devastation About To Be Wreaked On An Idyllic German Nature Refuge

Early last June I presented here a series of before-and-after photos showing the devastation by wind parkson the beautiful German countryside. The photos were presented by windflut-elpe.de, a site protesting wind parks in forests and natural heritage locations.

That post generated a tremendous reaction, and was shared more than 4000 times in social media. Therefore the site has asked me to post on the following video, made by a drone, with the hopes of getting the message out. 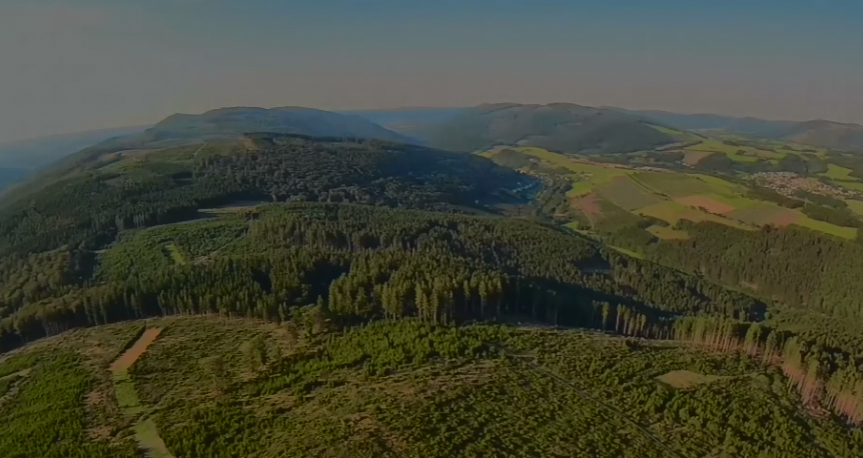 Screenshot of idyllic German landscape that is slated to be destroyed by massive industrial windpark. See drone video here.

The video starts with a view of the idyllic Central German landscape along with an instrument mast, which is for recording the wind conditions at the site in preparation for the wind park that is about to be installed there.

Keep in mind that this wind business is all about a select few, corrupt good-old boys network-type scammers cashing in big time at the expense of the rest of us and the environment itself – nothing more. Wind energy is one of the greatest big-business scams on earth.

We sent a video drone to the 102 meter wind mast at Mannstein in order to film a 360° panorama view from the perspective of the planned industrial wind power park.

The first stop is at the 135 meter height (turbine drive shaft height) where the drones makes a 360° camera sweep of our beautiful homeland. You can even see the tiny 57 meter high Stüppelturm, which is one of the highest viewing points in the Sauerland region. On some days here it is even possible to see the Ruhr region.

The second stop is approximately 200 meters high (rotor height of the wind turbine) where the drone makes a second 360° camera sweep. Here we find ourselves at about 900 meters above sea level. Here we are speechless at just how we are able to look directly down at the villages below. Conversely this is how villagers there will be viewing the huge wind turbines. A total of 14 of these wind turbines whose blades sweep an area the size of a football pitch are planned to be turning here.

At night it will be possible to recognize this large industrial complex for producing subsidized erratic power through the red blinking lamps on the turbines all across the breathtaking Sauerland Region. All this will happen in a protected natural wildlife reserve, where normally even the height of a simple hunting stand is regulated.

This is truly incomprehensible.

We hope many citizens in the towns of Wulmeringhausen, Bruchhausen, Assinghausen, Wiemeringhausen and Siedlinghausen will take the time to look at the destruction of nature that is now taking place.

Who is responsible for this madness?

Ask your elected officials, and boot them out of office!