Berlin is Germany’s largest city, and in and around it there are 7 weather stations reporting to the Deutsche Wetterdienst (DWD), Germany’s national weather service.

Earlier today Germans and Berliners woke up to one of it’s coolest nights so far this fall with temperatures around the freezing point. If you asked people in Berlin what the temperature was this morning at 6 a.m., you’d get very different answers. Why? Obviously because of the siting of the thermometers.

Website Wetterkontor here showed the readings taken this morning at Berlin’s 7 official weather stations located about the city. Below is a cropped table of these 7 stations:

As you can see, depending on where the temperature reading was taken, the temperature ranged from a low of -2.3°C to +3.2°C recorded at Kaniswall and Marzahn respectively. That’s a span of 5.3°C!

I decided to plot these results on a map depicting the greater Berlin area below. We plainly see that the stations located near the city center are warmer. 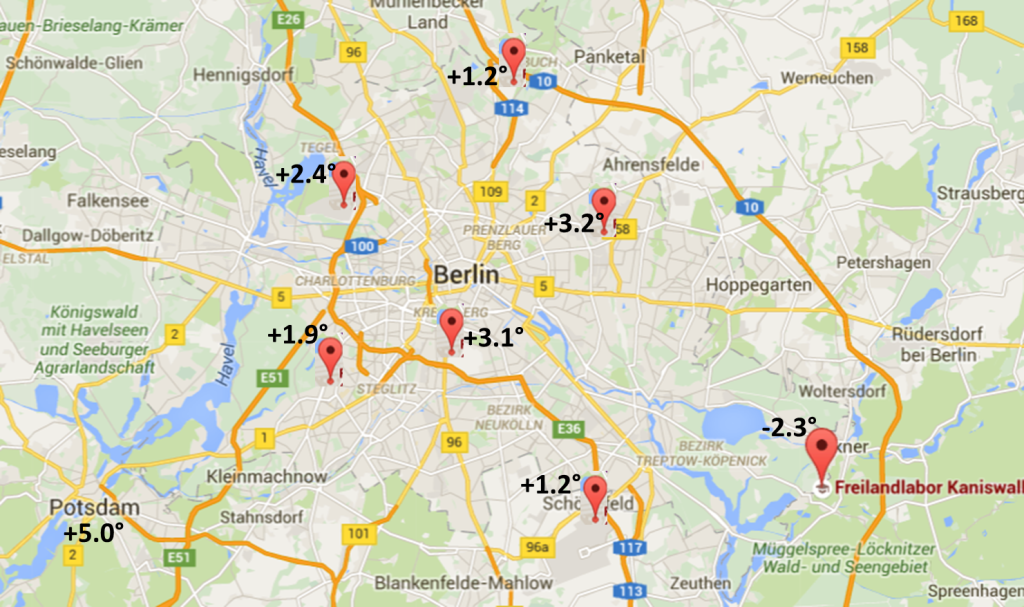 In general, the further out you get from the city center, the lower the temperatures become. This gives real meaning to “cooler temperatures in outlying areas“, which we often hear from local weather reports.

What’s the take-home message? Clearly surface readings entail lots of uncertainty, and it’s probably a good idea to fall back on the satellite readings for accuracy. Little wonder that the 20th century showed a general global warming, especially when we consider that most of the stations have been moved next to large airports and big cities made of concrete, steel and asphalt.

Of course the above are readings taken for only one morning. It would be more interesting and telling to compare the overall long-term trend of each station. But I think it’s safe to say that most of us have a pretty good idea of what those results would be.