A high centered over the Baltic states is pumping frigid air over central and eastern Europe, leading to widespread frost and snow this morning.

Here’s a list of the lowest readings recorded in Germany this morning: 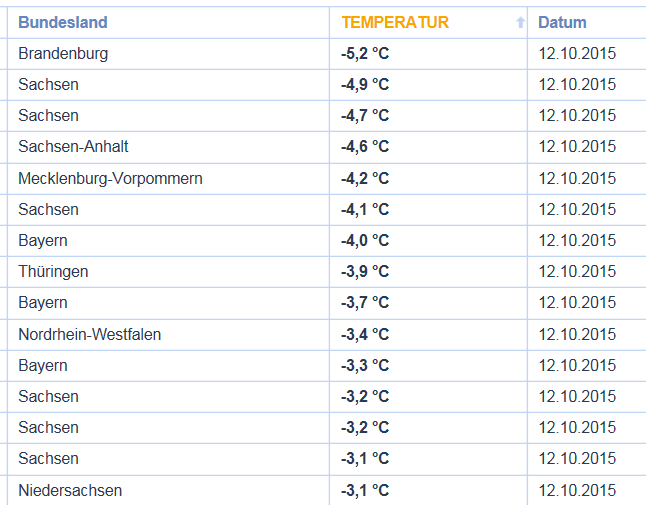 You can also look at this map showing the cold centered over Germany. Right now warming is on nobody’s mind, and this current fall is exactly the kind people have seen generations earlier. The German climate has been hardly different than it was 30, or 60 years ago. The country is still getting its snow in the winter and frosts in the fall and spring despite the earlier predictions these events would be rare.

At Twitter Dr. Ryan Maui also tweeted a chart showing how southeast Poland and parts of Romania, Ukraine and Slovakia got battered by  snow earlier this morning, even “heavy” in some areas. 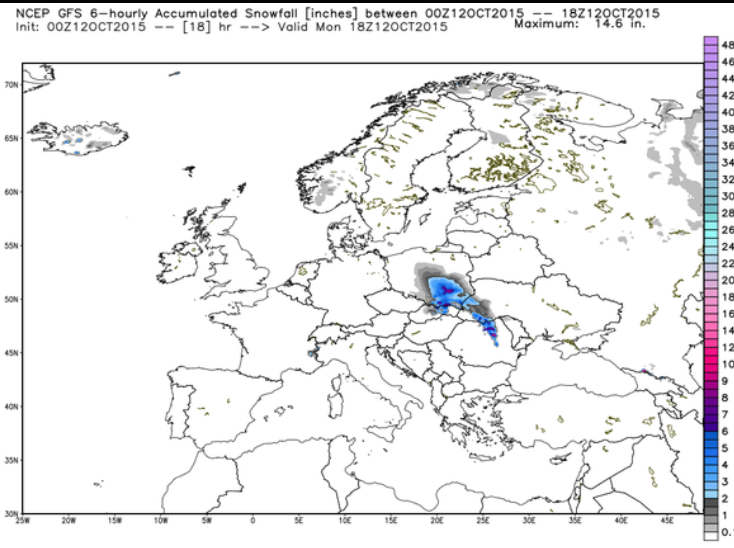 Speaking of snow, it’s forecast to hit in Germany’s central hilly region later this week. According to WetterKonor here (my emphasis):

On Wednesady it will rain along the coast and over the course of the day a little bit over the far west. From Thuringia and Saxony rain showers will extend out to the northeast. Foremost in the low mountains there will be sleet and snow showers as well. Only in the south will it remain mostly dry, with a mx of sun and clouds. Weak to moderate winds will blow mostly from the northeast.
By the end of the week rain clouds will stretch over Thuringia and Saxony and to the south. There will be local sleet and snow showers in the bag.”

Dr. Ryan Maue at Twitter here presents a chart showing where the snow is most likely to fall in Germany on Wedenesday.

Austria looks to be hit by heavy snow, with some areas forecast to get a foot. One reader asked if such snow events are unusual for this time of the year. The answer depends on weather you are a skeptic or a global warming alarmist. For skeptics this is perfectly normal and is the sort of thing seen over the past 100 years – it’s weather as usual. For alarmists on the other hand, well, they said these events would be rare – even in mid winter. Snow is what we call for alarmists “inconvenient events”.

Is this the start of a brutal and protracted winter?

A number of forecasters have warned that the NAO has flipped, and thus will result in cold air dipping across the continent and bringing a bitter cold winter. Whether that pattern holds, however, is unknown. It could just let up and we could wind up with a mild winter.

But so far things are not starting off well. Already I’m sipping on a cinnamon tea of the kind popular around Christmas.