German ZDF public television here brings a report on the performance of wind turbines in Germany titled: “Wind energy – a loss business?“. In summary: Investors are losing money and many are finding themselves the victim of overblown promises. 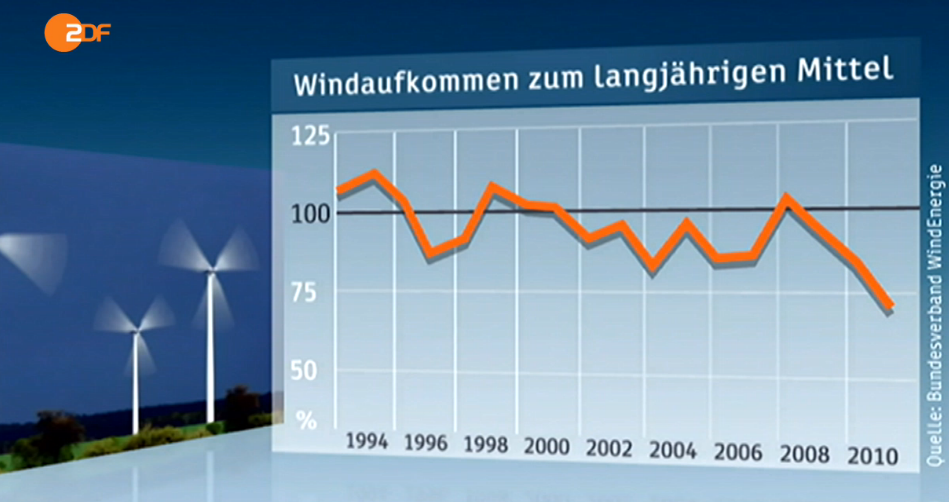 ZDF public television wind occurrence chart above based on data provided by the German Association for Wind Energy. It shows that actual wind occurrence fell below expectations most of the time. Chart cropped here.

Everywhere in Germany monster wind turbines, which at times soar over 200-meters, are popping up. They are supposed to eventually supply the country with clean, environmentally-friendly energy, the ZDF reports. But according to an analysis of 200 wind parks carried out by Werner Daldorf, an expert certified accountant, they are failing economically. It turns out that wind energy investors often see returns that fall far short of what they were originally told to expect – despite all the subsidies designed to make wind parks risk-free and profitable for their operators.

About two thirds of the investments are not paying out as expected. The capital that the investors paid is at risk and possibly will not be recovered.”

The problem, ZDF reports, is that without wind there is no money. ZDF says that future projections of wind occurrence appear to have been overblown, and “are well below what was expected and produce far less power than first thought” – see chart above. Most of the time the wind blows below what investors were told to expect. As a result, not only is wind energy making German power exorbitantly expensive for consumers, but it is also hitting rosy-eyed investors.

Not only have a number of small investors, communities and towns been misled, many investments are doing poorly. But the exact data is being kept under wraps.”

The City Utility of Mainz, which invested heavily in wind energy, wrote to ZDF:

The actual wind yield coming from these turbines has been far less than expected – despite the safety buffer that had been assumed.”

ZDF clarifies: “In plain language, the investment aren’t paying off.” The only ones making money, ZDF writes, are the builders, land leasers, banks and turbine manufacturers. The losers, Daldorf summarizes, are often the investors.

No surprise there. With charts like the one shown above, it’s becoming clear that wind energy is in large part just a ruinous scam.