The most recent move by the “Green Mountain” state and the wind power industry is the latest sure sign of desperation and policy bankruptcy. It is designed to stamp out citizens’ democratic right to peacefully protest and organize to oppose.

Now that Vermonters are finally waking up to the fact that the state and the wind power industry are gang raping Vermont’s idyllic landscape and natural heritage for profit and insane ideology, their resistance to wind park projects in Vermont has (finally!) grown to formidable mass – and so much so that the Vermont Attorney General’s Office is now resorting to brute legal intimidation to get the opposition to wind to back down.

This is the sad state of the wind industry in Vermont. Not only does it need junk climate science, massive subsidies and feed-in tariffs to survive, but now it also needs raw legal intimidation by the state itself.

Criminal investigation – just because they oppose

Annette Smith, executive director of the wind energy opposition group “Vermonters for a Clean Environment“, has posted at her Facebook site “Victims of Industrial Wind” that her organization has received a letter from the Vermont Assistant Attorney General, alleging their opposition activities against wind farms involves, get this, the “unauthorized practice of law”. The Victims of Industrial Wind organization is “assisting people and towns in participating in the Public Service Board process“, the site writes.

What follows is a copy of the Assistant Attorney General’s letter: 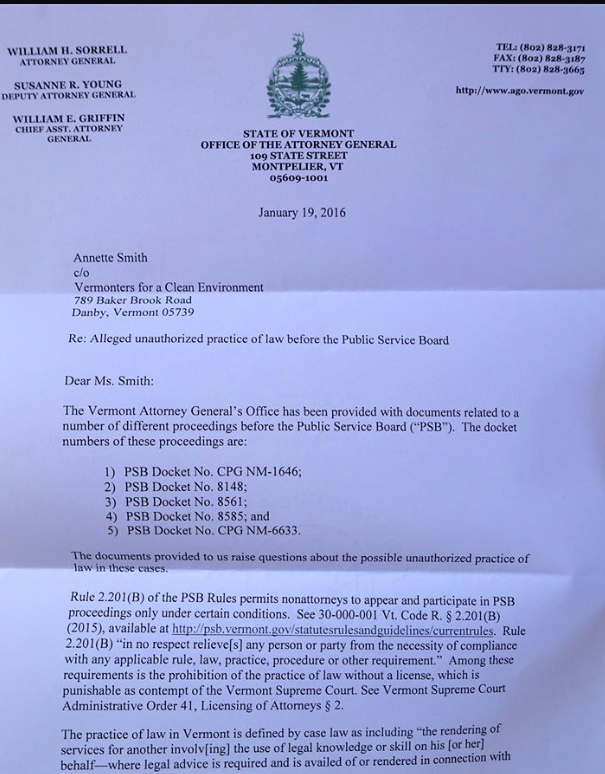 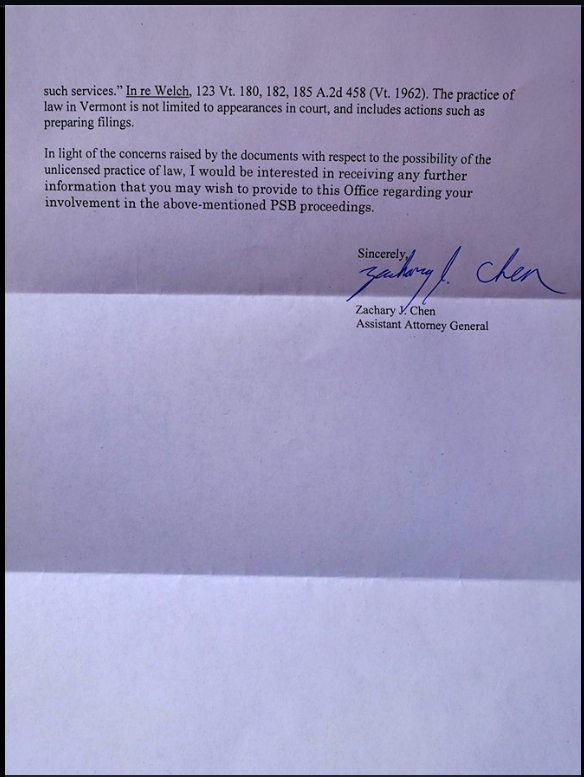 As the letter shows, Smith and her anti-wind advocacy organization are under investigation. Citizens actively participating in actions involved in peaceful protest and opposition now requires a license to practice law. This is absurd.

Obviously in Vermont if you want to protest the state, you first have to get a license to do so – from the state! If that is not tyranny, then what is?

Vermont Digger here writes how Smith is aghast at the state’s aggressive move, characterizing it as “harassment”, “very intimidating” and “politically motivated”. Vermont Digger goes on to describe a legal environment where the state, in partnership with the powerful wind industry, is attempting to bulldoze and crush an opposition that is run on a shoestring and has no legal resources. Vermont Digger writes:

Smith said she represents people who too frequently have nowhere else to turn. Renewable energy developers hire talented attorneys against whom landowners near project sites have no other way of successfully representing themselves.”

The message Vermont is sending is clear: Get of our way, or we’ll squash you. This is a clear abuse of power by the Attorney General’s Office and a grotesque attempt to deny powerless citizens the democratic right to engage in opposition.