I’ve reported earlier on Germany’s BARD 1 offshore engineering fiasco, where technical problems continue plaguing the wind park and has yet to deliver power on shore to reach markets. Even today the situation there remains unclear.

Moreover, just days I ago I reported how an expert institute confirmed that offshore wind park installations are highly vulnerable to the harsh sea conditions and plagued by stratospheric maintenance costs.

Well there is another major wind park that is now struggling with major technical problems and thus will not be able to deliver power until at least (optimistically) April. The giant offshore Riffgat wind park hasn’t delivered power since November of last year, so reports NDR German public broadcasting here. Hat-tip Gerti at FaceBook 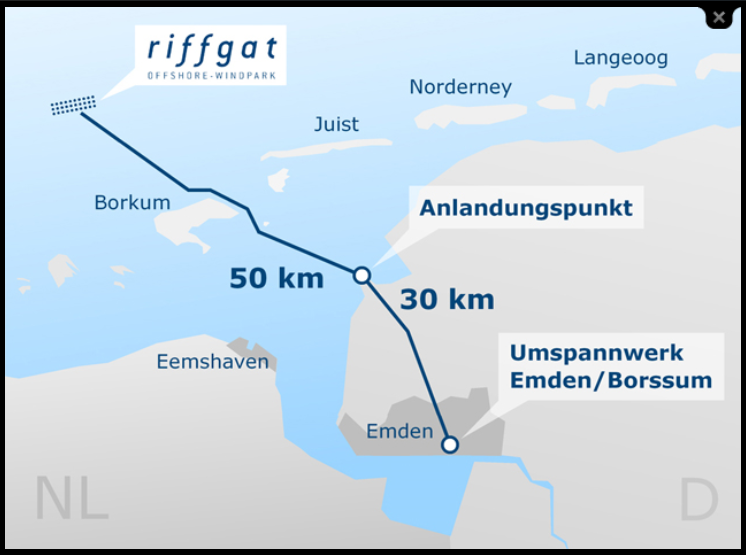 According to NDR, the power supply has been interrupted due to a failed underwater power transmission cable that serves to deliver the power onshore. That means a loss of 7 million euros per month in revenue, which the consumers will have to pay because Germany’s feed-in act required power companies to pay for the electricity produced by win parks even if it is never delivered. If that sounds strange, it is so because the market-hostile law is the sort of thing one would find only in old communist regimes.

The NDR clip reports that the reason for the failed cable is unclear, and could be caused by an error during installation or during the production itself. The cable fault itself is 22 kilometers from the wind park, just east of Borkum Island. Normally repairing the cable would be a routine matter, but there’s one big problem:  the seabed is riddled by old WWII munitions, which first need to be removed before repair works can start.

The Riffgat website here says the wind park consists of 30 units 3.6 megawatt-class wind turbines located some 15 kilometer away from the North Sea island of Borkum near the Netherlands. Each wind turbine has a 120 meter rotor diameter and the hub height is 90 meters. The turbines are firmly anchored by 70-meter steel bases rammed 40 meters into the seabed.

The NDR clip reports that EWE is not really too concerned about the technical problem and that it is not receiving 7 million euros worth of power each month. This is so because grid and transmission cable operator Tenet is required to pay EWE the money whether the power gets delivered or not. And where is Tenet going to get that kind of money? You guessed it! The costs, like everything else with the German Energiewende, just get passed on to the lowly consumers.