In the today’s hard copy edition of the Nordesee Zeitung, a north German daily, in a letter to the editor v 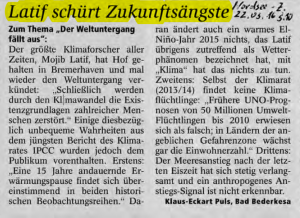 Image: partial shot of letter appearing in the 22 March 2016 edition of the Nordsee Zeitung.

Prof. Latif recently claimed in Bremerhaven that the future of the planet was at stake, and unless drastic action is taken quickly, “the basis for existence for many people will be destroyed by climate change”

Pause has not ended

In his letter to the daily Nordsee Zeitung, Puls reminds readers that the IPCC confirms the 15-year pause in global temperature in its most recent report and that “the warm 2015 El Nino year changes nothing“. Puls notes that even IPCC climate scientist Latif was correct in characterizing the El Niño phenomenon as a “weather event” and that “it has nothing to do with climate“.

In the second point, concerning climate refugees, Puls reminds: “Previous UN prognoses of 50 million environmental refugees by 2010 proved to be false. In countries that are in the so-called danger zone the number of inhabitants is actually growing.”

In his third point of rebuttal, Puls tells readers that sea level rise has steadily slowed down since the end of the last ice age, and that there has been “no detectable anthropogenic rise signal“.

Interestingly the newspaper left out Puls’s title as a degreed meteorologist. Titles are rarely left out in such situations in Germany.

Klaus-Eckard Puls is also the staff of the European Institute for Climate and Energy (EIKE).