As many are familiar, the warm peak of the interglacial cycle occurred about 7 thousand years ago, with progressively cooler 1,500 year warming cycles since then as the earth trends toward the next long-term glacial period.

Figure 1: Temperature of the Holocene Period.

Because the density and depth of the oceans around the world, changes in ocean temperatures lag behind a long-term inter-glacial cooling or warming trend by up to a few thousand years. This is partly due to the smaller 230-year cooling and warming cycles embedded within the long-term cycles.

Thus, until earth trends further toward the next glacial period, a continued trend in slow sea level rise could continue for another thousand years – although rises will become less and less as time progresses, or it may even stabilize and halt entirely within the next few years as the next 230-year global cooling cycle takes hold and earth continues to progress toward the next ice age.

The short-term 230-year Natural Climate Pulse 230 global warming and cooling cycles will be the most important aspect during the next 150 to 200 years. These cycles are controlled by the earth-moon-sun gravitational cycles and the solar cycles, which in-turn in combination with the warming and cooling – control fluctuations in sea level.

As seen in Figure 2, there have been 6 warming cycles during the past 1,200 years and the beginning and ending of each cycle occur like clockwork about every 220 to 230 years. The last warm cycle ended around 1780 and the year 2019 is approximately 230 years from this date. 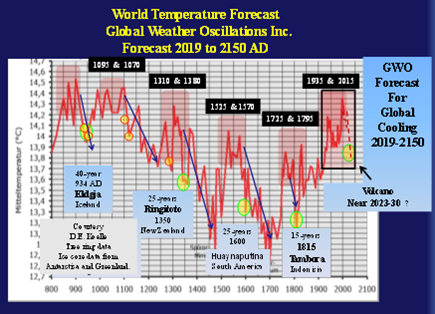 Just as important as the 230-year Natural Climate Pulse is the Solar Activity Cycles. As seen in Figure 3, solar activity has entered a new Maunder-type Minimum that should continue for the next 50 to 90 years. 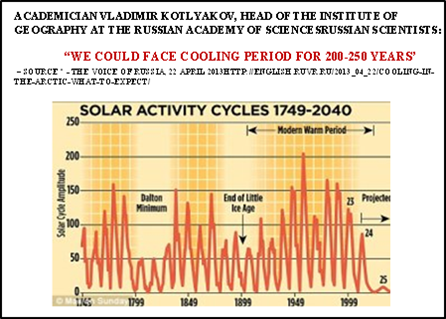 Figure 3: The solar cycles since 1749 and the prediction is for a solar minimum to cause a cooling period about 200 years.

Like the Climate Pulse Cycles, these cycles also correlate with the approximate 230-year warming and cooling cycles.

Earth is now entering a Climate Pulse Global Cooling Cycle which will last between 100 to 200 years, and this will greatly stabilize or even reduce sea level rise. The coldest years of the upcoming Natural Climate Pulse cooling cycle will be from the year 2020 through 2220, and especially from 2025 through 2060 – a period that will likely see epic cold temperatures not seen since the early 1800s. The Arctic and Antarctic entered the cooling cycle around the year 2013 and the full effects will become noticeable on or after the year 2019.

Most sea level predictions that are widely distributed by government agencies and universities paint an alarming picture for coastal areas during the next 80 years and beyond. If sea levels actually rise as predicted by the United Nations Inter-Governmental Panel on Climate Change (IPCC), coastal areas of the United States and especially low lying areas and Ports would be very susceptible to the projected rises.

But extreme caution and doubt should be exercised with these predictions. The government grant system offers research grants to universities for the purpose of researching theories that may or may not be true.  Unfortunately this process has not been used wisely during the past 20 years, and sometimes abused by the university research programs.

Much of this begins with the lobbyists and bureaucrats in Washington D.C. and the United Nations. The lobbyists are infusing money into the university grant systems worldwide in order to promote money making agendas. If the universities and governments can be convinced that Climate Change has catastrophic consequences – special interest agendas can easily be put in place. But to do so, scare tactics are used by agencies to further these agendas. Unfortunately the university grant system has become the puppet to bolster the agendas on Climate Change issues. By using scare tactics fanned from poor science, ideas and facts can easily be misconstrued.

Fanning the fire is unfortunately done in several ways. After the lobbyists and special interest groups set the ground work to promote their special interest climate agendas, it then spills over to the grant system.  Once the grants are put forth, catastrophic yet often scientifically unfounded results spew from the universities to scientific journals.  Worse, young scientists must toe the line and continue to publish substandard research and findings – or they may not reach tenure.