We routinely read about “highest ever” Arctic ice sheet and sea ice melt rates in the Arctic. And about rapid, “faster-than-expected” melting of ice shelves in West Antarctica.  And then, of course, we’re told that sea levels are rising at an accelerating rate — a catastrophically accelerating rate — due to the amplified warming at the poles, or “polar amplification”.

A warming and cooling Arctic

As documented in the below Climate4you graph (HadCRUT4), the Arctic climate has followed a roughly 60-year oscillation in the last century. Arctic (70-90 N) temperatures warmed during the 1920s to 1940s, cooled during the 1950s to1990s, and then returned to a warming trend from the mid-1990s onward.

Back in the early 1990s, the failure of the Arctic region to warm during the previous ~40 years (1950-1990) despite the concomitant increase in anthropogenic CO2 emissions was puzzling to scientists publishing in the journal Nature (Kahl et al., 1993: “Absence of evidence for greenhouse warming over the Arctic Ocean in the past 40 years“), leading them to question whether the models for the CO2 greenhouse warming hypothesis  could adequately explain climate fluctuations for the polar regions.

In particular, we do not observe the large surface warming trends predicted by models; indeed, we detect significant surface cooling trends over the western Arctic Ocean during winter and autumn. This discrepancy suggests that present climate models do not adequately incorporate the physical processes that affect the polar regions.

The lack of widespread significant warming trends leads us to conclude that there is no strong evidence to support model simulations of greenhouse warming over the Arctic Ocean for the period 1950-1990.  Our results, combined with the inconsistent performance of model simulations of Arctic climate indicate a need to understand better the physical processes that affect polar regions, especially atmosphere-ice-ocean interactions, ocean heat transfer and cloud radiative effects“

A cooling Antarctica, Southern Ocean since 1979

In contrast to the recent Arctic warming trend, there has been a lack of atmospheric warming in and around Antarctica since the late 1970s according to both the UAH and RSS datasets (as shown in the two graphs below). Scientists have documented a net growth in Antarctic sea ice in the last few decades, and, according to Fan et al. (2014), the Southern Ocean has also cooled since 1979, consistent with the increase in sea ice.  These results are, of course, not consistent with modeled projections.

[A]ll of these studies reported a close relationship between [sea ice extent] and sea surface temperature (SST) whereby sea ice gain is associated with lower SSTs and vice versa. … Cooling is evident over most of the Southern Ocean in all seasons and the annual mean, with magnitudes approximately 0.2–0.4°C per decade or 0.7–1.3°C over the 33 year period [1979-2011].” 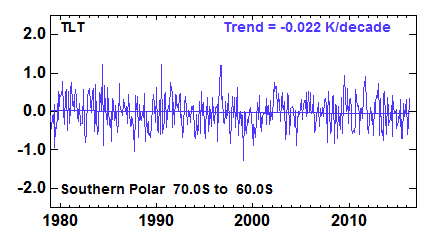 The unsettled science of polar amplification and CO2 forcing

As the warming in the Arctic has resumed (after decades of cooling), scientists no longer seem to be questioning the theoretical models projecting a polar-amplified warming due to increases in atmospheric CO2 concentrations. Instead, it is presumed to be “settled science” that the dominant cause of the Arctic warming trend since the mid-1990s has been anthropogenic  CO2 emissions.

But is the science of polar amplification due to a rise in atmospheric CO2 really settled? A paper published recently  (2015) by Dr. Schmithüsen (Helmholtz Centre for Polar and Marine Research, Bremerhaven, Germany) and colleagues may seriously undermine this conceptualization. The scientists analyze observational measurements (using the Tropospheric Emission Spectrometer) of global-scale CO2 radiative forcing and find the greenhouse warming effect for CO2 is “weak” (Greenland) to non-existent (Antarctica) at polar locations, and that the CO2 greenhouse warming effect is instead strongest in the equatorial regions.   Not only is the polar amplification paradigm  rendered questionable by these observed results,  but Schmithüsen et al. (2015) have found that, for central Antarctica, increasing CO2 actually leads to a “negative greenhouse effect”, or a net cooling.

Below are highlighted excerpts from the Schmithüsen et al. (2015) paper entitled “How increasing CO2 leads to an increased negative greenhouse effect in Antarctica“.

For this region [central Antarctica], the emission to space is higher than the surface emission; and the greenhouse effect of CO2 is around zero or even negative, which has not been discussed so far. We investigated this in detail and show that for central Antarctica an increase in CO2 concentration leads to an increased long-wave energy loss to space, which cools the Earth-atmosphere system.”

For most of the Antarctic Plateau, GHE-TES [greenhouse effect as measured by the Tropospheric Emission Spectrometer] is close to zero or even slightly negative; i.e., the presence of CO2 increases radiative cooling. Over Greenland, the greenhouse effect of CO2 is also comparatively weak but invariably positive. An evaluation of monthly averages of GHE-TES shows that the increased cooling due to CO2 of Antarctica is strongest during austral spring and autumn. … Central Antarctica is the only place on the planet where increased CO2 concentrations lead to an increased LW energy loss to space [cooling]. In the Northern Hemisphere the lowest, but invariably positive, [CO2] forcing values are seen over Greenland and Eastern Siberia.” 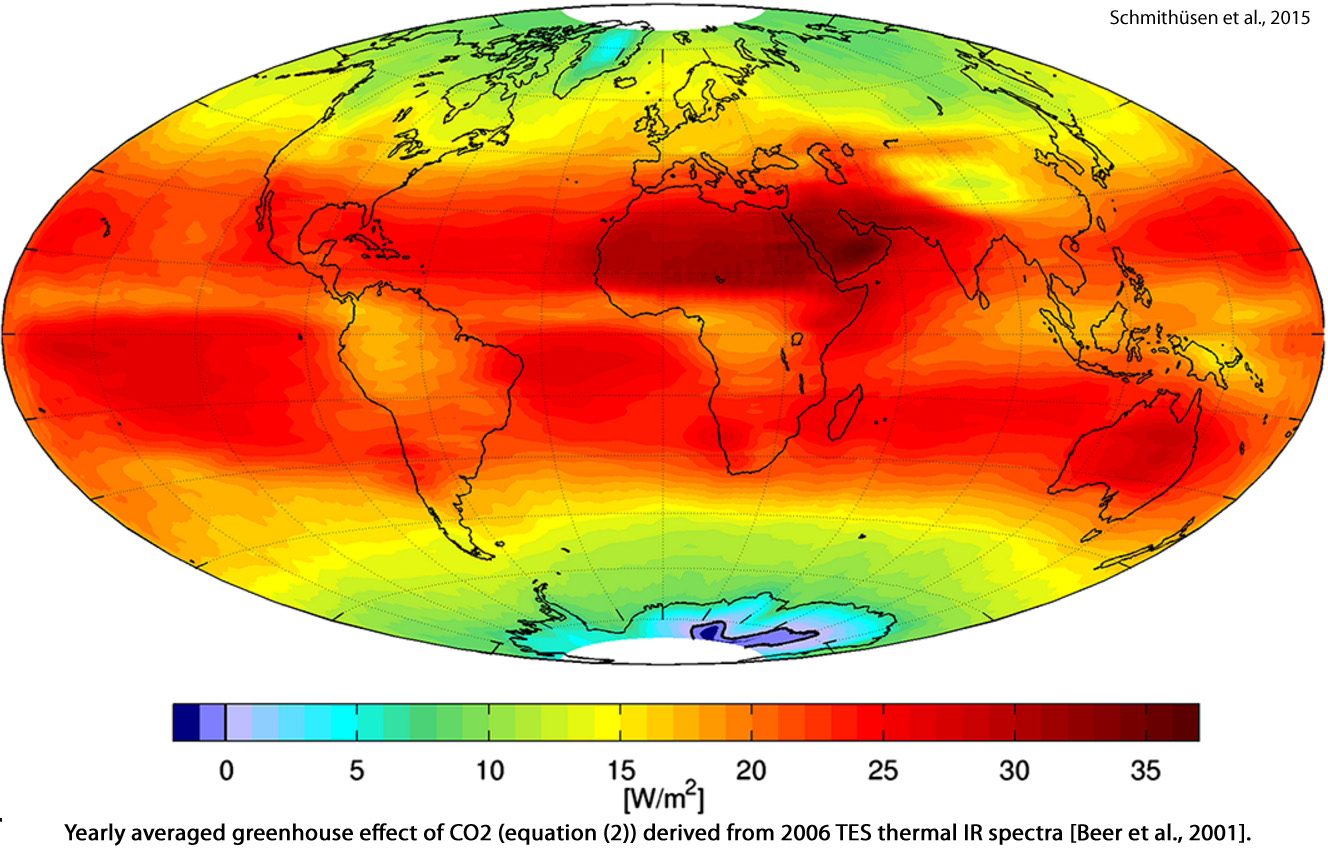 To put this relatively “weak” -1 to +5 W/m2 CO2 greenhouse forcing for the polar regions into perspective, consider that the radiative forcing (greenhouse warming effect) for clouds has been found  to be several times  greater (~30 W/m2) over the Greenland ice sheet than for CO2 forcing (~5 W/m2).   In fact, scientists (Tricht et al., 2016) have determined that cloud forcing warmed the Greenland climate by 1.2°C from 2007 to 2010, which is enough heat energy to melt 90 Gigatonnes (Gt) of ice.

Clouds are known to play a pivotal role in regulating the local SEB [Surface Energy Balance], with competing warming and cooling effects on the surface. […] The satellite-based cloud observations allow to estimate the cloud impact on the SEB [Surface Energy Balance].  … The annual mean CRE [Cloud Radiative Effect] of 29.5 (±5.2) W m 2 provides enough energy to melt 90 Gt of ice in the GrIS [Greenland Ice Sheet] ablation area during July and August. … The snow model simulations, which capture the evolution of the GrIS SMB [Surface Mass Balance] from 2007 to 2010, indicate that clouds warm the GrIS [Greenland Ice Sheet] surface by 1.2° (±0.1) C on average over the entire period [2007-2010]. … These results further indicate that not only liquid-bearing clouds but also clouds composed exclusively of ice significantly increase radiative fluxes into the surface and decrease GrIS SMB [Greenland Ice Sheet Surface Mass Balance]”

Not only for Greenland, but on a global scale, cloud radiative forcing has also long been observed to be far more climatically influential than CO2 forcing. For example, in the Ramanathan et al. (1989) paper entitled “Cloud-Radiative Forcing and Climate: Results from the Earth Radiation Budget Experiment” — which has been cited over 1300 times in the peer-reviewed literature — it was determined that the greenhouse effect of CO2 may need to be increased by a factor of 100 to approach the greenhouse effect of clouds. What follows is an excerpt:

Water vapour and cloud are the dominant regulators of the radiative heating of the planet. ..The greenhouse effect of clouds may be larger than that resulting from a hundredfold increase in the CO2 concentration of the atmosphere. … The size of the observed net cloud forcing is about four times as large as the expected value of radiative forcing from a doubling of CO2. The shortwave and longwave components of cloud forcing are about ten times as large as those for a CO2 doubling.”

The implications of these measurements showing relatively minimal CO2 greenhouse forcing at the poles are enormous. Succinctly, the alarmist insistence of a significant anthropogenic influence on polar ice sheet melting and the consequent impact on sea level rise become highly dubious if observational evidence reveals that the CO2 greenhouse effect is only very modest  (-1 to +5 W/m2) for the polar regions.  For if the Arctic warming trend and sea ice decline that resumed in the 1990s cannot be significantly attributed to increases in atmospheric CO2, this severely undercuts the heart of alarming claims about humans catastrophically altering the polar — and global — climate.

The sensational headlines about melting polar ice and rapidly accelerating sea level rise would be reported with much less exhortative zeal if there wasn’t also a co-existing paradigm that says anthropogenic CO2 emissions are what drive these alleged climate changes. So when science doesn’t corroborate what the alarming headlines say about a significant anthropogenic or CO2 influence on the polar climate, ice melt, or sea level rise, that science is usually glossed over…or dismissed.  After all, the science is supposed to be settled. Right?

28 responses to “Top Scientists: CO2-Induced Warming Is “Weak” To Non-Existent For Greenland, Antarctica!”