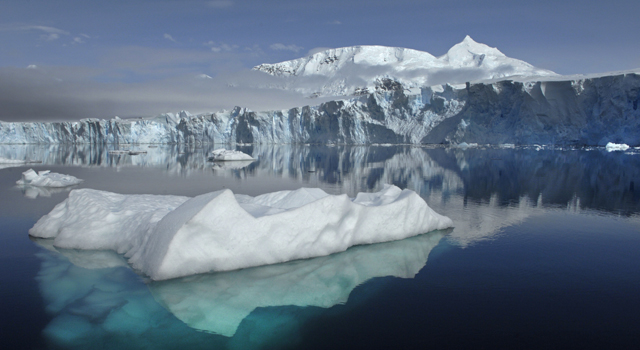 For example, Jan Lenaerts and 4 other scientists recently published a paper in the journal Climate Dynamics that projects (via modelling) the Antarctic ice sheet will show a net gain of about 70 billion tons of ice per year for every degree of warming induced by anthropogenic CO2 emissions. Below are the highlighted portions of the Lenaerts et al. (2016) paper.

This warming-causes-ice-sheet-growth-and-sea-levels-to-decline conceptualization is not new. Back in the mid-1980s, when the Greenland ice sheet was still in a cooling phase, Dr. R.K. Klige (USSR Academy of Sciences), concluded that a future rise in temperatures would cause a positive mass balance for both Greenland and Antarctica and “ultimately a lowering of sea level” due to the “increased accumulation on the major ice sheets.” Here is the abstract with key points of emphasis from Klige, 1985.

The author attempts to quantify the amount of water released (by various means) by the world’s glaciers, and to determine the variations in these figures provoked by the warming trend which was observed for the first half of this century, and the cooling trend observed in the 1960s and 1970s. Unfortunately Antarctica has generally had to be excluded from these calculations since data on a number of components of the water balance of the Antarctic Ice Sheet are simply not available. Perhaps most significant are the author’s predictions that the anticipated future rise in air temperatures will provoke increased precipitation and hence increased accumulation on the major ice sheets. Even despite increased melting in coastal areas of Greenland and Antarctica the net effect will be a positive mass balance and ultimately a lowering of sea level.”

Not only is the Antarctic ice sheet growing in mass and lowering sea levels in modelled projections, it is doing so in observational studies. According to NASA and Zwally et al. (2015), during the 1990s and the first decade of the 21st century (1992-2008), the gains in ice accumulation in East Antarctica outstripped the losses in West Antarctica, leading to a net gain of about 100 billion tons of ice per year on the Antarctic ice sheet during this period.

During the last 6 years of the study, the net gain in ice removed -0.23 mm per year from sea levels. The total sea level lowering equivalent was -0.28 mm per year when including the 1992-2001 rates of net ice gain for Antarctica. It should be pointed out that, unlike Lenaert  et al. (2016), Dr. Zwally (and co-authors) prefer to believe in different models that say future warming on the Antarctic continent will produce a net ice sheet loss rather than an ice sheet mass gain. Below are excerpts  from NASA’s press release for the paper.

But it might only take a few decades for Antarctica’s growth to reverse, according to Zwally. ‘If the losses of the Antarctic Peninsula and parts of West Antarctica continue to increase at the same rate they’ve been increasing for the last two decades, the losses will catch up with the long-term gain in East Antarctica in 20 or 30 years — I don’t think there will be enough snowfall increase to offset these losses.'”

So, according to scientists and climate modelling, we have good news from Antarctica. Warming from a rise in anthropogenic CO2 emissions causes the Antarctic ice sheet to grow, and this lowers sea levels. In the future, we can expect that more warming due to human activity will cause more ice sheet growth and a further reduction in the Antarctic contribution to sea levels.

And if those models are not preferred, one can believe in the models that say warming from a rise in anthropogenic CO2 causes the Antarctic ice sheet to melt, and this, in turn, will cause sea levels to rise.

Unfortunately, the RSS satellite temperature dataset indicates that Antarctica and the South Polar region has not warmed in the satellite era, but has instead cooled slightly in the last 3 and a half decades.

Therefore, it appears we will have to patiently wait for Antarctica to actually warm due to the increase in anthropogenic CO2 emissions.