It shows how the surface temperature for the southern hemisphere is well into the cooler-than-normal territory, now close to a full degree Kelvin cooler than April’s peak. The black line depicts the global temperature, which shows that it is cooling and getting close to the 1981-2010 climatological mean. Joe tweets:

What can we expect for the future?

If the models are anything to go by, more cooling! For example JAMSTEC projects a 2-year protected period of below normal temperatures in the major El Niño 3.4 region. 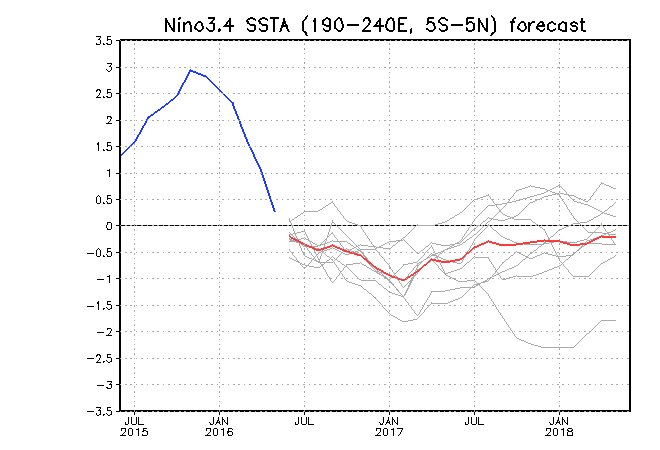 One model even projects a massively cold Event, which no one in their right mind could ever hope happens. Keep in mind that projections this far out are fraught with speculation and adventurous guesswork.

Also the newest NCEP CFSv2 forecast sees a ruddy La Niña in the pipeline, which will translate into a considerable cooling off of the globe’s surface later this year. 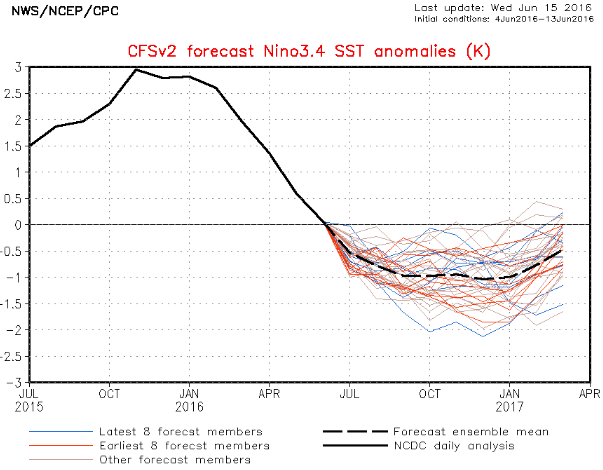 By the end of this year this cooling off will likely become quite evident in the satellite data (RSS and UAH). Implication: all the talk of warming will fade away.

Not only the globe will cool off, but also expect all the rhetoric about global warming to be put on ice for quite awhile. The resumption in warming will have been a very brief one, and the pause will get extended to 2 decades…and then more.

Surely the alarmist hotheads will then shift their focus to Arctic sea ice, freak weather events, coral bleaching or ocean acidification. And so the revolving door of bogus scare scenarios will continue.