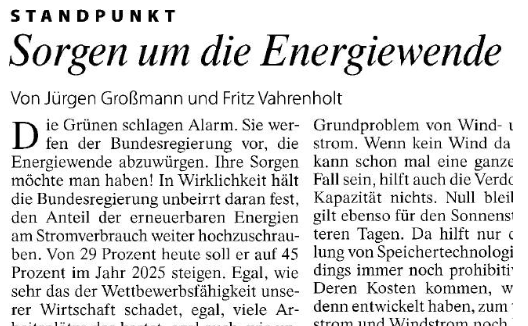 The two German experts warn that any attempt the country makes to reach the target of 45% renewable energy by the year 2025 is tantamount to economic Harakiri.

Already Germany’s budding Energiewende is costing German consumers and businesses 28 billion euros annually, or roughly an average of 300 euros for each household. These costs are driven in part by insanely high leasing costs that wind turbine operators pay to wealthy land owners –  and subsidies paid to growers of corn for biofuel.

Großmann and Vahrenholt also remind readers storage technologies are “prohibitively expensive” and offer no solution the problem of evening out the highly volatile wind and solar supply.

Another major problem, the two energy experts comment, are the extreme uncontrolled power surges occurring on both sunny and windy days. In such cases the operators of over-fed, sizzling grids are forced to dump surplus electricity into the power grids of neighboring countries, which has the effect of upsetting both their grids and power generation markets. Another peculiarity is that wind park operators are routinely ordered to shut down, yet are paid for the power that never gets produced. German Vice Chancellor Sigmar Gabriel once said that other countries think it’s “crazy”.

Großmann and Vahrenholt, both former top energy executives, characterize the demands made by the influential German Greens to shut down the country’s coal power plants as naïve and simply unworkable, and call plans to install large wind parks near the Baltic Sea before constructing transmission lines to take the power to markets “nonsense”.

German reductions would be wiped out in just 3 months

The economics of the German renewables project also border on insanity. Vahrenholt and Großmann remind that all the CO2 reductions that are to be made by Germany would be wiped out by China’s massive growth in just a matter of three months, making all the pain and cost for nothing. China represents 29% of the world’s CO2 emissions, Germany only a paltry 2.5%.

Vahrenholt and Großmann conclude that Germany must return to rationality by getting back on a renewable energy path that is technicaly and economically feasilble, and not one that destroys the environment and economy, as is the case currently in Germany. They point out that Great Britain, Spain, Poland, Denmark and Italy have all scaled back their renewable energy development so as to not further overburden their consumers and industry.