La Niña is coming: the Earth is cooling!

By Schneefan.
(Translated and condensed by P. Gosselin)

The warming El Niño weather phenomenon has been history since June 2016. The cool La Niña started in mid July 2016.

The daily anomalies in sea surface temperatures (SSTA) in the main Niño region 3.4 are now updated. In mid July it is in the La Niña zone at -0.74°K:

The plot above shows the daily SSTA with respect to the international climate mean of 1981-2010 in the main Niño region 3.4 with data from NOAA/CDAS (Climate Data Assimilation System). The SSTA reached and dipped below the -0.5°K mark in mid July. The latest value was -0.74°K (July 19, 2016). Source: www.tropicaltidbits.com/analysis/ocean/.

The following chart shows the current La Niña extending from the coast of Peru to the international dateline (180°): 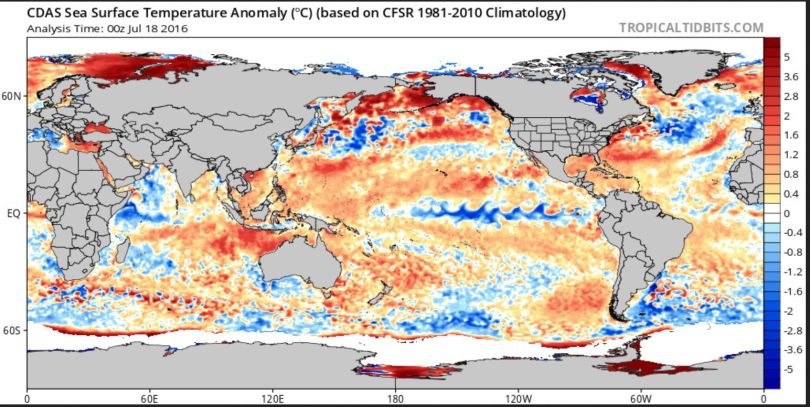 The cold La Niña (blue at the equator) is shown developing. Source: www.tropicaltidbits.com/analysis/ocean/.

After a record warm February 2016 with an anomaly of +0.83°K using the unaltered UAH satellite data, the global temperature of the lower troposphere centered at 1500 meters fell by 0.49 K in June to +0.34°K, see the following chart: 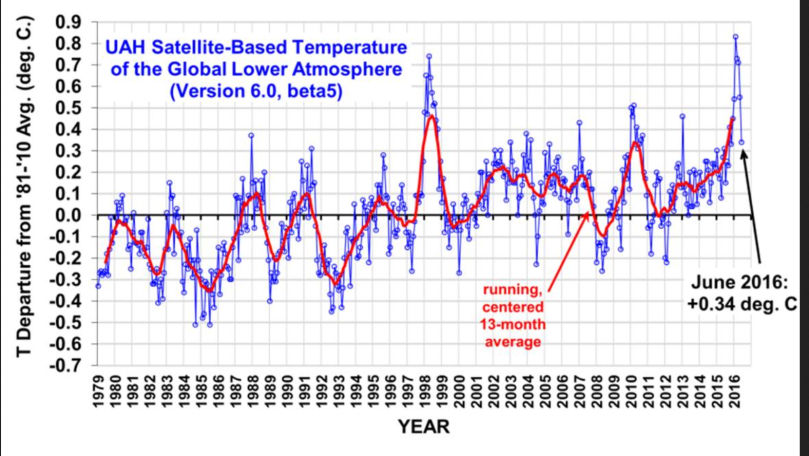 Finally, after months of disagreement, the major ENSO models are now almost in full agreement that La Niña conditions will start to take hold this summer, now that there is already a deviation of -0.7°K. See: http://www.bom.gov.au/Pacific-Ocean.

The ENSO model CFSv2 of the NOAA again looks totally confused, as it did in May. Today the ENSO monthly prognosis shows a broad scatter of +0.4°K to -2.2°K for January 2017, see following chart. That means: Nobody knows!

The energy content of the water down to a depth of 300 m at the equatorial Pacific continues to show a negative anomaly for July 2016 at -1.0°K and thus has been in the cold La Niña range of under -0.5°K. 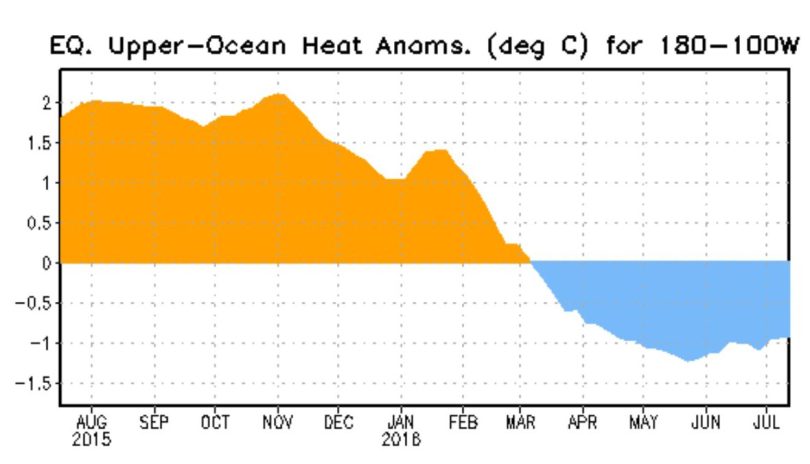 It is therefore not expected that a significant cooling will take place in July this year. Dr. Roy Spencer (UAH) has already pointed that out here:

Just remember, the temperature anomaly can also temporarily rebound for a month, as it did in late 1998.”

However, it is already clear from the unaltered satellite data of the first half of this year: 2016 will not be a record warm year.