The HadCRUT global temperature dataset that the IPCC references contains instrumental records that date back to the year 1850. Precise CO2 data (measured in tenths of parts per million)  from thousands of years ago can be found in Antarctic ice cores, with direct measurements (Mauna Loa) available since the 1950s.   In comparing the two records, it can be concluded that during the last 165 years, rapidly increasing CO2 concentrations only correlate with rapidly increasing global temperatures for one 25-year period (1977-2001).   Put another way, for 85% of the last 165 years there has been little to no correlation between CO2 concentration changes and temperature changes.

Before illustrating the lack of trend correlation between CO2 and temperature during the last 165 years, it needs to be pointed out that scientists have determined that on average it takes about 10 years for the maximum warming effect from CO2 emission to be realized. In other words, CO2 emissions from the 1950s predominantly had the most pronounced effect on temperature trends by the 1960s.  It could also be said that we are now experiencing the height of the warming effects of the CO2 emissions from the early 2000s.  The timing of the CO2-to-temperature effect was determined by Ricke and Caldeira (2014) in their Environmental Research Letters paper entitled “Maximum warming occurs about one decade after a carbon dioxide emission”.

It is known that carbon dioxide emissions cause the Earth to warm, but no previous study has focused on examining how long it takes to reach maximum warming following a particular CO2 emission. Using conjoined results of carbon-cycle and physical-climate model intercomparison projects, we find the median time between an emission and maximum warming is 10.1 years.

Having established that correlational fluctuations between CO2 concentrations and global temperature should be detectable on a decadal scale (presuming that Ricke and Caldeira [2014] are correct), the CO2 and temperature record for the last 165 years can be considered — rooted in the anthropogenic global warming (AGW) assumption that temperature fluctuations should occur in direct response to CO2 concentration changes.

The IPCC routinely selects starting and ending points from the instrumental record to establish warming and cooling phases in their trend analysis. For example, the years 1998-2012 from IPCC AR5 (2013)  are selectively used to analyze the recent “hiatus” in global warming, and the years 1910 to 1940 are selected in AR4 (2007) to denote the early 20th century warming (ETCW).  In that same vein, the decadal-scale periods selectively considered for this analysis are:

According to NASA*, between 1850 and 1910, CO2 concentrations rose from 285 ppm to 300 ppm. During this same 60-year period, global temperatures cooled by almost -0.1°C despite the +15 ppm increase in CO2 concentration.  The temperature trends are illustrated below with woodfortrees interactive graphs. 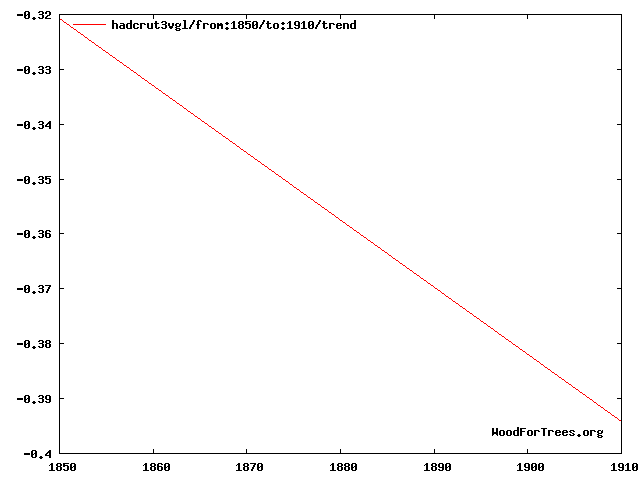 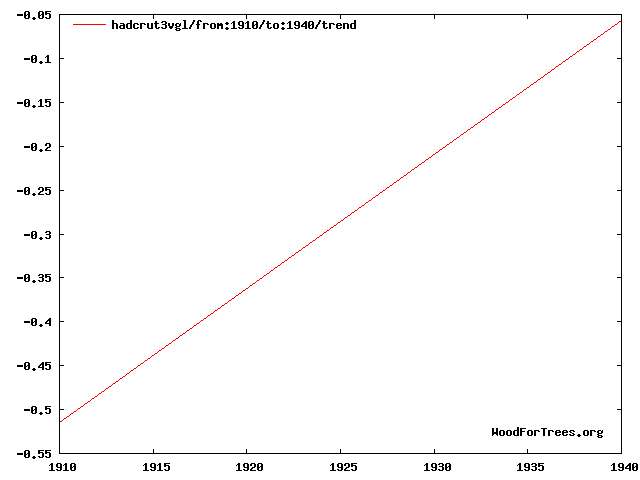 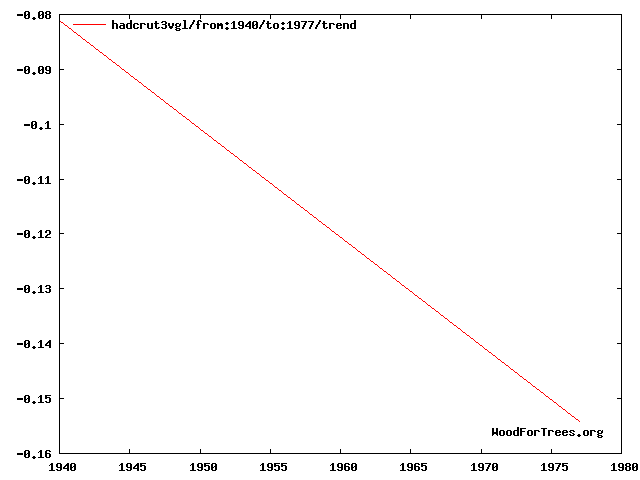 The first and only period in the last 165 years that there was actually a correlation between rapidly rising anthropogenic CO2 emissions and rapidly rising temperature was between the years 1977 and 2001. CO2 concentrations rose from 334 ppm to 371 ppm, or +37 ppm during this period.  Temperatures rose by +0.35°C, or +0.15°C per decade  —  a similar warming rate when compared to the 1910 to 1940 trend. 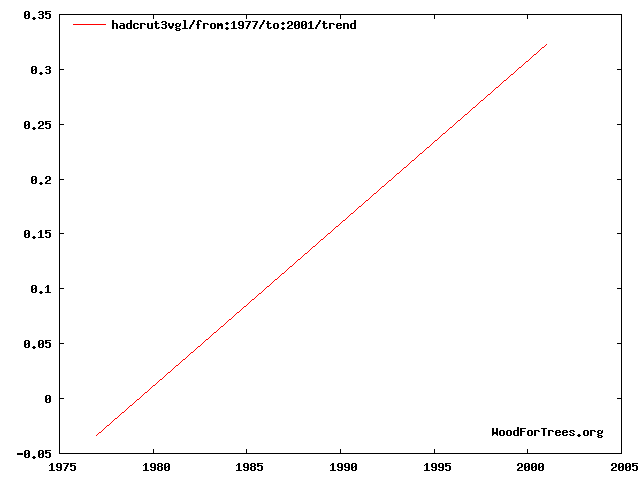 Finally, between 2001 and 2014, CO2 concentrations rose from 371 ppm to 398 ppm, or by +27 ppm. During this same period,  temperatures remained flat or even slightly cooled by a few hundredths of a degree, which meant that a substantial portion of the latest IPCC report (AR5, 2013) necessarily was devoted to explaining why the 21st century global warming “hiatus” had occurred.

Several dozen scientific papers were also published during this period, each attempting to explain why CO2 could be rapidly rising while temperatures were not.  This “pause” inconvenience was eliminated in 2015 with the onset of the 2015-’16 Super El Niño that rapidly drove up sea surface temperatures, as well as via the nearly immediate  acceptance of the controversial Thomas Karl (et al., 2015**) “pause-busting” paper which selected the year 1998 as a starting point and adjusted past warming down and more recent warming up (so as to allow temperature trends to correspond better with climate models).  With the onset of the La Niña recovery trend commencing in April/May 2016, temperatures are likely to continue to decline from the 2015-’16 El Niño peak in the near future despite the rapidly rising CO2 concentrations (which have now eclipsed 400 ppm); this may further extend the 21st century pause in global warming that began in the early 2000s. 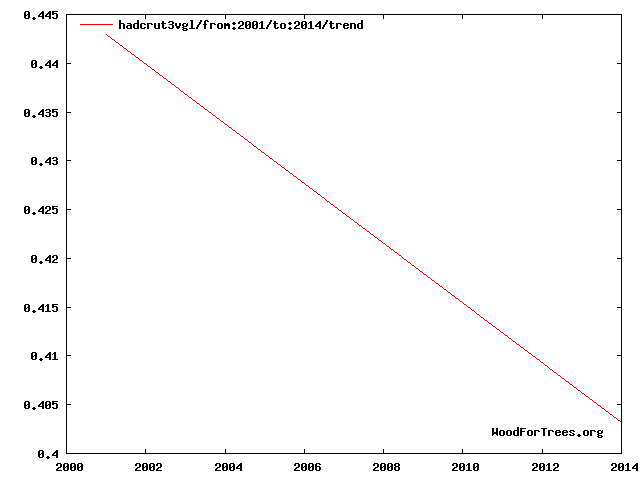 Many Holocene temperature reconstructions show significant fluctuation in temperatures during the last 2,000 years (i.e., a Roman Warm Period, a Dark Ages cool period, a Medieval Warm Period, and a Little Ice Age cool period). However, CO2 concentrations remained stable at about 270 to 275 ppm throughout each warming and cooling epoch.  For example, during the roughly 600 years between the as-warm or warmer-than-now Medieval Warm Period and the beginning of the 20th century (the 1300 to 1900 A.D. Little Ice Age), temperatures plummeted to the coldest centennial-scale phase of the last 10,000 years.  Yet CO2 concentrations not only did not decline along with the temperatures, they rose slightly during this period.  This record necessarily extends the lack of correlation between CO2 and temperature changes well beyond the last 165 years.

The summarizing question, then, is this:

If CO2 is a primary determinant of temperature (as the AGW theory proposes), and if the warming effects of CO2 emission reach their maximum impact within about a decade, why is the correlation between decadal-scale CO2 trends and decadal-scale temperature trends weak to non-existent for most (~85%) of the last 165 years, as well as completely non-existent for nearly all of the last 2,000 years?