Bats are known to be some of the world’s savviest aerial acrobats. Using their mysterious sonar system and shape-shifting wings, bats adeptly swerve and swoop and dive in flight to avoid collisions with both stable and moving objects.

And yet bats stand no chance against a 200-meter high wind turbine with blades the length of a football field, spinning at speeds up to 275 km per hour. Even if their tiny bodies can avoid a blunt-force collision with one of these merciless steel beasts, just the act of drawing near to a wind turbine may nonetheless expose bats to jarring air pressure changes that cause fatal lung damage (barotrauma).  The latter is the main reason why bat carcasses can be found scattered beneath wind turbines at locations across the world. 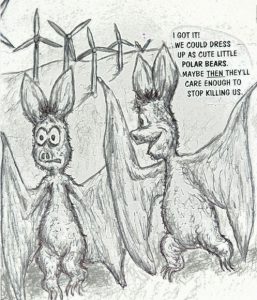 The slaughtering of bats by wind turbines isn’t slowing down; it’s getting worse. The 21st century wind turbine bat-killing rate has already begun to seriously threaten the long-term survival of the world’s 172 endangered bat species. According to scientists publishing in the journal Mammal Review (O’Shea et al., 2016), the spinning blades of wind turbines (together with white noise syndrome) are now the leading cause of multiple mortality events in bats.

Two factors led to a major shift in causes of MMEs [multiple mortality events] in bats at around 2000: the global increase of industrial wind-power facilities and the outbreak of white-nose syndrome in North America. Collisions with wind turbines and white-nose syndrome are now the leading causes of reported MMEs [multiple mortality events]  in bats.”

The global-scale slaughter of bats promises to get even worse in the coming few decades. In Canada alone, for example, scientists Zimmerling and Francis (2016) have determined that an average of 15.5 bats are killed at each individual wind turbine site every year.  At current (2013) installed wind capacity, 15.5 killings per turbine per year means that 47,400 bats are killed annually in Canada.  With the 350% increase in installed wind capacity intended for Canada within the next 15 years, about 166,000 bats are projected to be slaughtered on a yearly basis by about 2030.

Bat mortality due to wind turbines in Canada

On average, 15.5 ± 3.8 (95% CI) bats were killed per turbine per year at these sites (range = 0−103 bats/turbine/yr at individual wind farms). Based on 4,019 installed turbines (the no. installed in Canada by Dec 2013), an estimated 47,400 bats (95% CI = 32,100−62,700) are killed by wind turbines each year in Canada. Installed wind capacity is growing rapidly in Canada, and is predicted to increase approximately 3.5-fold over the next 15 years, which could lead to direct mortality of approximately 166,000 bats/year. … The little brown myotis (Myotis lucifugus), which was listed as Endangered in 2014 under the Species At Risk Act (SARA), accounted for 13% of all mortalities from wind turbines”

And that’s just Canada. The Canadian wind turbine bat-killing rate is likely similar to the bat-killing rate in the United States, with some evidence suggesting the U.S. rate could be higher.  For example, Davila (2016) found that there were an average of 10.8 bat carcasses under each of the four Illinois wind turbines studied — over a span of just 20 weeks.

Our study focused on four single-standing turbines found in Erie, IL, Sherrard, IL, and two in Geneseo, IL. We searched for dead bat carcasses within a 48 m radius of the turbine base to determine frequency of bat mortality each week from 6/8/2015 to 10/31/2015 [20 weeks] to include summer roosting and fall migration periods. Dead bats located within the circular plot were marked with GPS, and species were identified. Anabat acoustic detectors were used to determine species present in the surrounding habitat.  … Forty-three carcasses were found at the sites“

An average of 10.8 bats killed per turbine in 20 weeks would extrapolate to an average of 28 bats slaughtered by each wind turbine per year — almost double the Canadian bat-killing rate.

Using the conservative determination of 15.5 bats killed per wind turbine (Zimmerling and Francis, 2016) described above, the 48,500 currently operating U.S. wind turbines are now slaughtering over 750,000 bats per year. This bat-killing rate appears to fall in line with other published estimates.  For example, Hein and Schirmacher (2016) indicate that recent studies suggest U.S. wind turbines were slaughtering between 600,000 and 880,000 bats per year as of 2012.

But this is just Canada and the U.S; there were only about 53,000 wind turbines installed in these two North American countries combined as of 2015. Worldwide, there are currently (2015) 314,0001 wind turbines spinning and slaughtering bats by the millions.   Yes, by the millions…every year.

Using the conservative average of 15.5 bats killed yearly by each wind turbine (Zimmerling and Francis, 2016), it can be estimated that there are now about 4.9 million bats slaughtered every year by the world’s 314,000 wind turbines. Even if the killing rate per individual wind turbine was generously reduced to ten bats killed per year instead of 15.5, wind turbine bat slaughter rates would still exceed 3 million per year.

But a rough estimate of 3 to 5 million bats killed yearly by wind turbines is only the current rate.  As of 2015, just 2.5% of electrical energy was supplied by wind worldwide1, 5.  There are deliberate plans to have wind turbines “realistically” generate 18% to 34% of the world’s supplied electrical energy by 20505, 6.  To achieve this massive expansion, installed wind capacity will need to double and triple and quadruple in the coming decades.  The number of bats slaughtered by wind turbines could easily grow to a rate of more than10 million annually within ten to 15 years.  At some point, there may not be enough species of bats left to kill.

Bat species can be found dwelling in a wide variety of terrestrial habitats, including deserts and along sea coasts. Each species may play a fundamental role in its local ecosystem.  For example, Kuntz et al. (2011)7 indicate that 528 different plant species rely on bat pollination and seed dispersal for sustainability.  Boyles et al. (2011)8 estimated that by controlling pest populations (insects), the agricultural benefits of bats may reach $22.9 billion (U.S.D.) annually in the continental U.S. alone.

According to the International Union for Conservation of Nature and Natural Resources, five species of bats have already been classified as extinct as of 2015, and another 172 species are listed as “critically endangered, endangered, or vulnerable” (Hoffmaster et al., 2016)9.  The prospect of losing bat species to wind turbine slaughter has increasingly become an acute topic in recently published scientific literature.   For example, Hein and Schirmacher (2016) indicate that the current rate of wind turbine bat fatalities has become “unsustainable” for the already fragile maintenance of many of their species, and that actions to reduce wind turbine slaughter should be “implemented immediately”.

Given that bats have a low reproductive rate—typically only having 1 or 2 pups/year—and require high adult survivorship to avoid population declines (Barclay and Harder 2003), this level of impact [hundreds of thousands of bats killed by wind turbines per year in the U.S. alone] presumably puts bat populations at risk. Moreover, many species were thought to be declining prior to the onset and expansion of wind energy development, including species impacted by white-nose syndrome (Winhold et al. 2008, Frick et al. 2010). Although population data are sparse or lacking for many bat species, current and presumed future level of fatality is considered to be unsustainable, and actions to reduce impact of wind turbines on bats should be implemented immediately.”

Question: Do the immense costs of wind outweigh the tiny “benefits”?

The primary reason why there has been such explosive growth in the use of wind turbines in the 21st century is, of course, because wind energy is expected to assume a fundamental role in the transition from fossil fuels to renewable energy in the coming decades. As mentioned above, world governments have recently (Paris Climate Conference, 2015) confirmed plans to rapidly expand their wind energy programs, which will presumably reduce CO2 emissions and, in turn, mitigate the amount of global warming we may have otherwise experienced had we continued using fossil fuels at current pace.

But even if all the renewable energy transition planning (wind and solar primarily) were ambitiously implemented as recently professed by world governments, and even if these heavily pro-renewable energy policies remained in place through the year 2100, the total amount of global warming we may “save” the planet from may be less than two-tenths of a degree Celsius (0.17°C) over the next 85 years (Lomborg, 2016)10.  This assumes, of course, that model-based assumptions about the climate’s high sensitivity to CO2 concentration changes are accurate.

In the press release summary of their peer-reviewed paper, Jones and Warner (2016) paint an even bleaker picture of the futility of installing exponentially more wind turbines across the globe. The authors curtly conclude that “efforts to curtail world temps [with renewable energy transitioning] will almost surely fail” because “the numbers just don’t add up to do it.”

Just considering wind power, we found that it would take an annual installation of 485,000 5-megawatt wind turbines by 2028. The equivalent of about 13,000 were installed in 2015. That’s a 37-fold increase in the annual installation rate in only 13 years to achieve just the wind power goal,” adds Jones. Similar expansion rates are needed for other renewable energy sources. “To even come close to achieving the goals of the Paris Agreement, 50 percent of our energy will need to come from renewable sources by 2028, and today it is only 9 percent, including hydropower. For a world that wants to fight climate change, the numbers just don’t add up to do it.”

If these analyses are correct, installing an exponentially growing number of wind turbines may have no more than a negligible impact on the curtailment of projected global warming in the coming decades.   Meanwhile, the long-term survival of the world’s already-threatened bat populations are directly and mortally impacted by government policies to add hundreds of thousands more wind turbines in the immediate future.

At some point soon, the question must be asked: Are the climate “benefits” of wind power (theoretically mitigating global warming by perhaps hundredths of a degree) greater than the costs to the world’s ecosystems incurred by the wind turbine slaughtering of millions of bats every year?

Or is there so little concern about the precarious fate of the world’s bat populations that it’s already too late to ask?

12 responses to “Wind Turbines Now Kill 3 -5 Million Bats Per Year. And For What?”