As is the case in many countries, major media outlets are increasingly accused of having abandoned real investigative journalism, and rather have taken on the role of unquestioning propaganda mouthpiece for the state or a single political line. The following is an example in Germany.
============================= 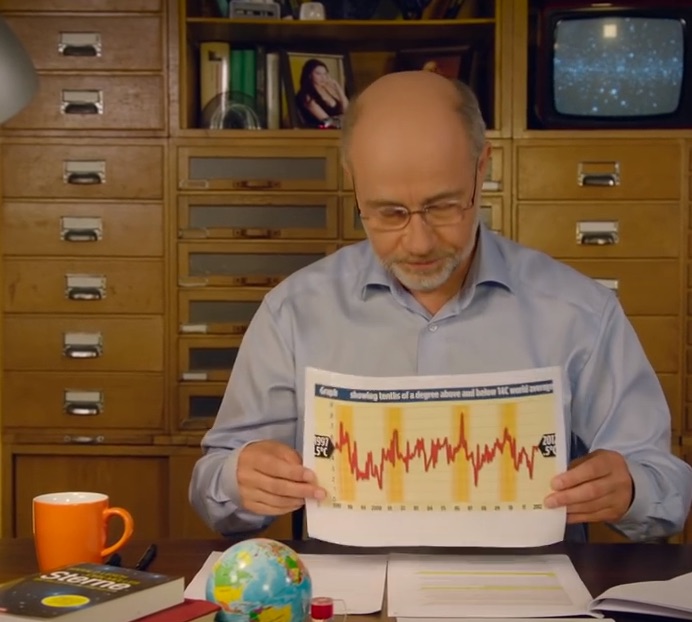 German public television science journalist Harald Lesch plays it loose with the facts to mislead the public. Image cropped from ZDF, Fair Use.

Many opposition parties in Europe, the GOP party in the US, as well as governments of various countries like Australia, Poland, etc. view “global warming” with healthy amount of scepticism, or even as a “hoax”.  In Germany the newly minted AfD protest party added to its programme that the party does not support so-called “climate protection” schemes. The AfD is to Germany what the UKIP is to the UK, i.e. a very inconvenient thorn in the side of the splintering euro-political establishment.

The AfD justifies its opposition to climate protection initiatives based on three factors: 1) all predictions of global warming rest solely on model calculations which have failed all tests, 2) there is no single scientific result published proving significant global warming by man-made CO2, and 3) there is a large number of publications definitely disproving any possibility of a sizeable influence of CO2 on the Earth’s temperature.

On ZDF German public television, Harald Lesch one-sidedly challenged the AfD’s climate science position. On the argument that the models are unsuitable for predictions, he stated bluntly:

No model that has not stood the test against measurements or experiments can be published in the scientific literature.”

Mr. Lesch, an astrophysicist, is surely familiar with scientific literature, and thus really must know that any number of model calculations are published without being tested by experiments/measurements. Every natural scientist knows this. Very often a model rests on a new idea or insight, something, which in itself is certainly worth publishing, and, consequently, gets published.

Thus Lesch’s statement is, to say the least, quite surprising. Would any experienced scientist really have no idea of the scientific publication process – even of his own field?

Readers may find it of interest that the AfD is right now the only political party in Germany that is expressly against action to “fight climate change”, and has been very successful in convincing plenty of voters, thus making the other parties very nervous.

It is always the same people who try to undermine the credibility of trusted experts.”

Here the trusted experts are in fact not trusted by everyone – rather only by much of the mainstream media, and of course the governments who happen to pay the experts.

Here Lesch points the finger at EIKE (European Institute for Climate and Energy), which operates the most widely viewed German speaking website (here) on issues concerning climate science and energy policy and is the only independent German association of scientists that discusses climate questions. Lesch added:

Of course I try to discuss this with them. I even tried to get in contact with them by phone, but they do not answer.”

This is untrue. A check among all EIKE members reveals that no EIKE member has ever received any inquiry from Leash in any way, shape or form. In return, however, EIKE requested the ZDF TV station to arrange contact with Lesch. Sadly the public-funded ZDF TV station refused to let EIKE contact Lesch.

ZDF refuses to give sceptics time

Requests for a public discussion between EIKE and the publicly-paid Mr. Lesch continue to go unanswered.

NTZ comment: The constant falsehoods aimed at diminishing dissenting voices indeed can get frustrating. However, it is only a matter of time before the media shoot themselves one time too many and end up bleeding to death on their own.