According to the IPCC (2013),  global sea levels rose by less than two-tenths of a meter (0.19 m) between 1901 and 2010.  Considering the scientific record of long-term sea level trends from locations across the globe, this small <0.2 m change in sea levels over the course of the last 110 years does not even fall outside the range of natural variability.

Sea levels have commonly risen and fallen at amplitudes much greater than two-tenths of a meter.   As Harris et al. (2015)  confirm, “relative sea-level variations of ∼1 m were common throughout the Holocene.” 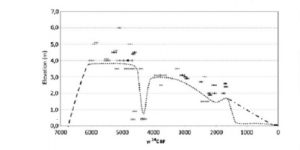 These rapid variations in sea levels pose critical explanatory problems for advocates of the AGW (anthropogenic global warming) supposition that human CO2 emissions, and not internal Earth-system dynamics, are what drive sea level changes.  Specifically, AGW advocates presume that rising CO2 concentrations cause sea levels to rise (and lowering CO2 concentrations cause sea levels to fall).  A large volume of rapidly accumulating scientific evidence not only does not support this CO2-rise-causes-sea-level-rise supposition, it suggests that a long-term  inverse correlation could just as easily be formulated: As CO2 rises, sea levels decline.

To illustrate this, consider the Bracco et al. (2014) graph above depicting meters-per-century variations in sea levels with the corresponding CO2 concentration recorded for each period.   Notice that the highstand period (5,000 to 6,000 years ago) had lower concentrations of CO2 than the following millennia that subsequently had higher CO2 concentrations.  Also, consider that there was no significant change in CO2 levels during the 400 years of rapid sea level changes.  Finally, notice that the last 200 years of sea level changes (if there have been any) are undetectable on this scale at this location even though CO2 concentrations were rising from 280 ppm to 400 ppm during this period. 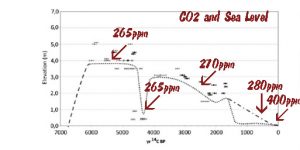 And this isn’t just true for the coasts of South America.  In the peer-reviewed scientific literature, a non-correlation — or inverse correlation — for CO2 and sea level (as CO2 rises, sea levels fall) has been reported by scientists for dozens of locations across the globe just in the last few years alone.  Graphs (with CO2 ppm concentrations, text, and arrows added) for a few other locations are shown below. 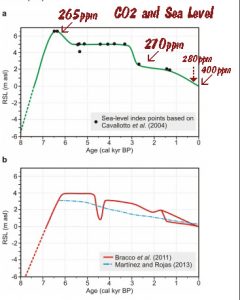 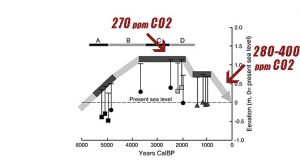 But not only is the CO2-rise-causes-sea-level-rise AGW supposition dubious, so is the entire paradigm of an alarming and catastrophic human-caused sea-level rise future.

It was recently pointed out that there are 4 newly published papers confirming that natural variability largely explains recent sea level fluctuations, not anthropogenic CO2 emissions.    Scientists also continue to publish papers (about 30 are compiled here) that indicate relative sea levels across the globe were often meters higher than they are now as recently as a few thousand years ago . . . when CO2 concentrations were much lower and anthropogenic CO2 emissions were non-existent.

In sum, scientists are increasingly finding that is difficult to even detect an anthropogenic signal in the noise of strong natural sea level variability spanning decades to millennia.  So at what point did it become “settled science” or “basic physics” that raising or lowering CO2 concentrations cause sea levels to rise or fall?

“Analysis of the RSL [relative sea level] database revealed that the RSL [relative sea level] rose to reach the present level at or before c. 7000 cal yr BP, with the peak of the sea-level highstand c. +4 m [above present] between c. 6000 and 5500 cal yr BP (depending on the statistical method used) or at c. 7000 cal yr BP according to the ICE-6G model prediction, gradually falling after this time to the present position … Particularly for the Río de la Plata (RDP), a Holocene RSL curve was presented by Cavallotto et al. (2004) based on 14 uncalibrated 14C ages from selected samples from the southwestern coast of the RDP (Argentina). This RSL curve was re-plotted by Gyllencreutz et al. (2010) using the same index points and qualitative approach but using the calibrated ages. It shows rising sea-levels following the Last Glacial Termination (LGT), reaching a RSL [relative sea level] maximum of +6.5 m above present at c. 6500 cal yr BP, followed by a stepped regressive trend towards the present (Fig. 2a).”

“The configuration suggests surface inundation of the upper sediments by marine water during the mid-Holocene (c. 2–8 kyr BP), when sea level was 1–2 m above today’s level.”

“Beach ridge evolution over a millennial time scale is also indicated by the landward rise of the sequence possibly corresponding to the mid-Holocene sea-level highstand of WA [Western Australia] of at least 1-2 m above present mean sea level.”

“Caspian Sea (CS) water level has fluctuated repeatedly with an amplitude of larger than 25m during the Holocene without any link with the eustatic sea level. …. The data from the Langarud sequence indicate that the CSL [Caspian Sea level] rose to at least −21.44m during that time (i.e. >6m higher than at present), as Langarud was probably not on the shore itself but was affected by distal brackish water flooding. This result is in line with historical findings about the CSL high-stand during the 14th and the early 15th centuries.  … This massive brackish water invasion would have caused a serious disruption to food supply to Persia.”

“RSL [relative sea level] stabilised ~0.2 m above present levels by 900 yr BP. While the mechanism of the RSL instability is still uncertain, the alignment with previously reported RSL oscillations, rapid global climate changes and mid-Holocene reef “turn-off” on the GBR are discussed.”

“Compared to the present, mostly drier conditions and a greater marine influence due to a higher sea level are inferred for the period between 4210 and 2710 cal BP [calendar years before present].”

“In northeastern Kuwait  …. a [sea level] highstand at ~ 5000–3500 cal yr BP [before present]. The berms are presently at ~ + 6 m above sea level, 2–3 m above the beach ridges. Human settlements were common on the ridge crests before and after the highstand [~6 m above present levels]. Regression to present-day sea level commenced after the highstand, which is when the sabkha began forming.”

“[R]esults from other studies … suggest that high-stand, at perhaps 2 m above present msl [mean sea level] was achieved as early as 7000 radiocarbon years BP (7800 cal. years BP) and that sea-level has exceeded the present value for much of the mid- to late-Holocene.”

“[T]he mid-Holocene [sea level] highstand is reported to have peaked at approximately +1.1 m above present and was sustained until approximately 2000 years B.P. in the Marshall Islands (Figure 4).”

“Upon correction for isostatic island subsidence, we find that local relative sea level was at least ~1.5±0.4 m higher than present at ~5,400 years ago.”

“Using 1 m below the tidal datum as the upper limit of coral growth, the elevations of these dead corals predict a mid-Holocene sea level 1.5–3.4 m higher than the present level.”