Browse: Home / 2016 / August / 30 / Warming Not Global… Joe Bastardi: “Most Of The Global Warming Is Happening At The Arctic And Antarctic.”

At his Satuurday Summary, veteran meteorologist Joe Bastardi looks at August global temperature (starting at about the 3:30 mark) and serves up a few intersting observations.

“Global” warming confined to the poles, in wintertime

First he reminds us that the “global” warming is pretty much confined to the poles, and that during the winter time. Warming during the summertime has been very small, “much to the chagrin of people who want the Arctic ice cap to disappear … Summers are not getting warmer in the Arctic”. He summarizes:

He then tells listeners that warming is hardly occurring 20° North and south of the equator. In summary the warming is mostly confined to the poles, and it isn’t even year round.

“Phony ideas” about how warm it is getting

The veteran meteorolgist then scoffs at the claim that 0.02°C warming per decade is going to cause mass migrations of populations:

Do you actually think that people can detect, and get migrational patterns, because people detect 0.02°C increase in temperatures? Cut me a break!”

“Probably one of the least ice melt seasons on record”

At 6:10 he looks at Arctic sea ice, saying that it is not going to reach a new record low, as many were hollering about earlier this year. The ice melt rate over the summer has been too slow. Joe says:

Chances are that we had probably one of the least ice melt seasons on record.” 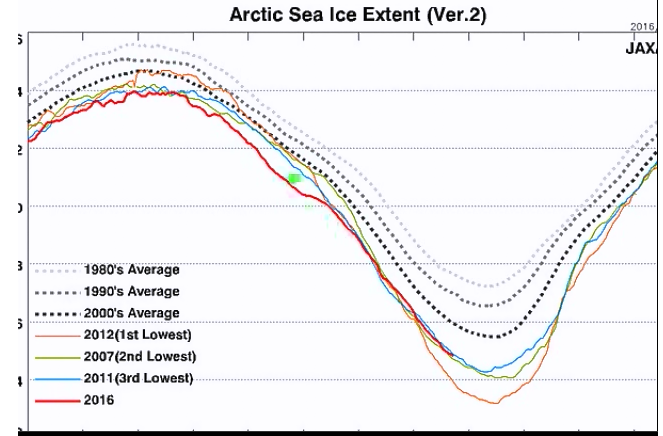 One reason this is so, Joe adds, is because summers have not been warming up there.

9 responses to “Warming Not Global… Joe Bastardi: “Most Of The Global Warming Is Happening At The Arctic And Antarctic.””