Yesterday the online German news weekly FOCUS here wrote an article that is certainly more bad news for Germany’s electricity consumers, who are already paying among the highest rates in the world.

One of Germany’s major power grid operators, Tennet, announced it is “massively increasing power grid fees” and that “power is going to be more expensive“.

This is another setback for German power consumers, who have seen their power bills explode since Germany enacted the renewable energy feed in tariffs into law as part of the Energiewende (transition to renewable energies). 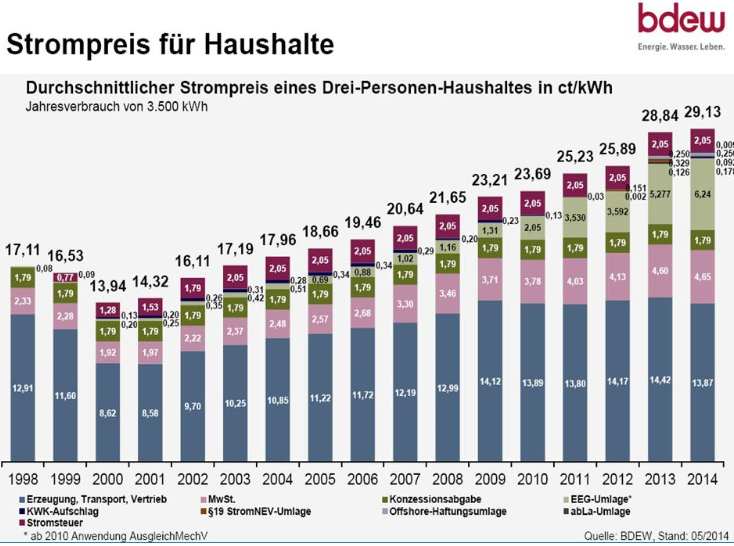 German power used to be affordable, and highly reliable. But all that has changed since climate hysteria and the green movement took over 15 years ago. Today German power is among the most expensive worldwide.

Power companies will have to deal with a higher electric bill next year. Power grid operator Tennet is increasing its price massively, and bases this on the resulting costs of the Energiewende.”

Our power grid fees will increase 80 percent on January 1st.”

For a three-person household, this will mean another 30 euros burden annually, says Keussen.

Moreover the highly volatile wind and solar energies have made the German grid highly unstable and have recently seen it on the verge of collapse. The major problem is that the power grid has been far from adequately expanded to accommodate the briskly expanding solar and wind energy capacity, thus leading to gigantic transmission bottlenecks and massive grid instability.

In fact the added costs in grid fees will have very little to do with grid expansion itself. Rather they are mostly due to “grid stabilization emergency measures” to prevent a total collapse.  FOCUS writes:

The lion’s share of the increase in grid fees from Tennet are due to grid stabilization emergency measures,’ said Keussen. ‘Only 5% are because of grid expansion.'”