Mike Shellenberger, President of Environmental Progress and Time Magazine ‘Hero of the Environment’, appeared dismayed when he tweeted here that Germany CO2 emissions rose over 1% in 2015, as the following chart shows: 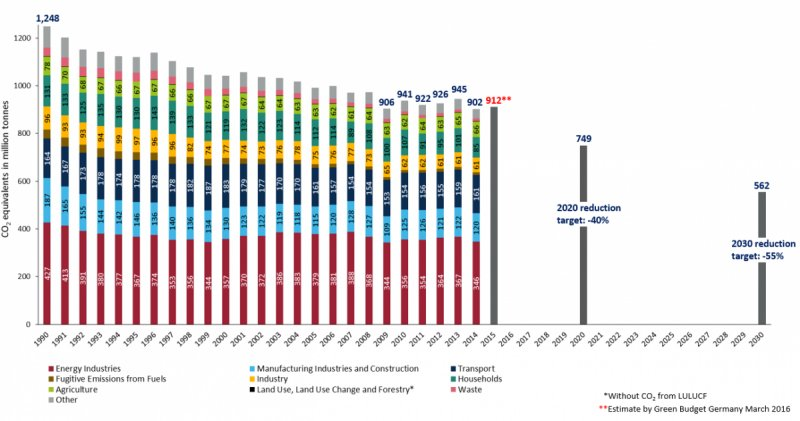 Megan Darby at Climate Home here calls the development “a blow to the country’s claims to climate leadership“.

Schellenberger has every reason to be shocked by the 2015 result.

1. 2015 was Germany’s second warmest year on record, meaning fuel consumed for heating had to have been low.

2. Germany has invested tens of billions of euros in its bid to switch to CO2-free energy sources. Angela Merkel top aide Peter Altmaier warned that the Energiewende would cost 1 trillion euros.

3. Consumers, who were  once into thinking it wasn’t going to cost much, are now paying close to the highest electricity prices worldwide. One kilowatt-hour costing close to €30 cents. Hundreds of thousands of households are having their power cut off because they can no longer afford to pay their power bills.

4. Germany power grid is now more unstable than it has been in decades. That fact in combination with the high electricity prices is driving industry out.

5. Germany’s per capita CO2 emissions are among the highest in the world.

6. About half of Germany’s CO2 reductions since 1990 resulted from the shut-down of former communist East Germany’s inefficient state-run industry.

7. Wind parks have blighted much of the country’s idyllic landscape and thousands of people are now suffering from health damage due to infrasound. Planned windparks are facing increasingly ferocious protests from nature protection and citizens groups.

8. 2016 will likely also see no reductions – thanks to the low petroleum prices and colder weather so far.

In summary Germany’s Energiewende has been an extremely costly government-intervention debacle of monumental dimensions. We haven’t seen such a large-scale industrial mismanagement since the collapse of the USSR and the German Democratic Republic. Recall that not only did their industry collapse into a heap of rubble, but they too also left huge environmental damage that we are still cleaning up 25 years later.

And no one in his/her right mind expects Germany to meet its 2020 target, let alone 2030. Other countries have to be insane (or have lots of money to burn) to follow the German example.