Winter To Drag On Across Central Europe, …March 2016 In Germany So Far 1.5°C Cooler Than Normal

According to the German DWD national weather service, March 2016 so far in Germany has been some 1.5°C colder than normal so far, and real spring weather remains out of sight. More on this here.

The forecast temperature anomaly for the next 7 days for all of Europe looks as follows: 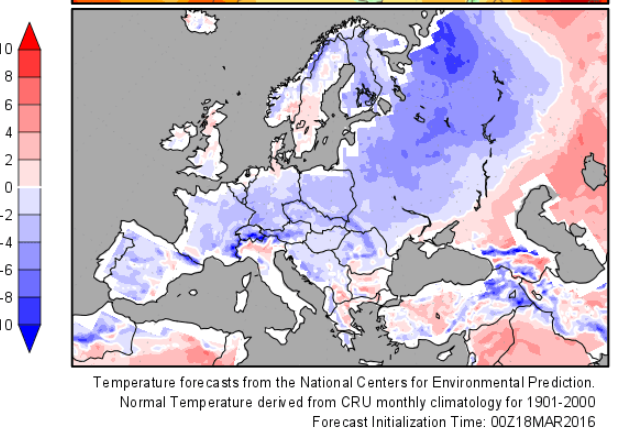 As far as Easter is concerned, there’s a lot of disagreement between the weather models. German weather site wetter.de writes:

Let’s put it this way. For the Easter days the European ECMF model and the American GFS strongly disagree with each other. While the European calculates a powerful high for Easter Monday, The GFS sees a low. The temperature differences are correspondingly different as well.”

One thing we can be sure about is that this March for Central Europe will go down as a cool one, and thus further extending the trend of springs arriving later and later.

The following chart shows March temps for Germany over the past 27 years. Once this year gets factored in, we will see an even greater cooling trend.

March mean temperature for Germany has fallen more than a degree Celsius over the last 27 years. Chart: Josef Kowatsch

12 responses to “Winter To Drag On Across Central Europe, …March 2016 In Germany So Far 1.5°C Cooler Than Normal”