A new paper just published online asks a timely and poignant question as the U.S. Presidential election splatters the headlines this week: What does the Paris Agreement actually do?  The author succinctly answers his own question, concluding that the Paris Agreement allows countries like China and India “permission to emit as much [CO2] as they see fit,” and therefore the international pact “makes the policy of mitigation of global warming impossible.”

What does the Paris Agreement actually do?

“Though very widely believed to be inadequate in the target it sets, the Paris Agreement is commonly thought actually to set a binding target of reducing global CO2e emissions so as to limit global warming to 2℃. Proper legal interpretation of the Agreement shows it to set no such target. It rather gives the newly industrialising countries such as China and India a permission to emit as much as they see fit. These countries have been principally responsible for the huge growth in emissions since 1990 and they will be responsible for their continued huge growth until 2030. The Paris Agreement therefore makes the policy of mitigation of global warming impossible. However, this policy has been impossible over the whole of the now more than a quarter century of international climate change policy.” 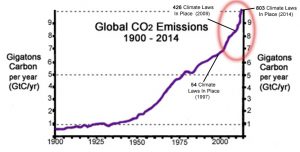 As appetite for electricity soars, the world keeps turning to coal

“[T]wo-thirds of the world’s electricity is still produced by burning fossil fuels, mostly coal — a proportion that hasn’t budged for 35 years. Emissions of carbon dioxide from power plants have more than doubled since 1980 as the world’s demand for electricity keeps rising.”

And fossil fuel use will continue rising – no matter how many more laws are passed.

Between 50 and 86 new coal plants are planned for Turkey in the next few years.

“The Russian government has endorsed a long-term coal industry development program, featuring an increase in coal production and coal-powered generation – a day after adopting a brand-new climate action plan.   The refurbished program sees coal production in Russia increase to 410-480 million tons by 2030, and exports are expected to grow by some 70 million tons.”

South Korea is also adding more coal-fired energy according to a report from Reuters.com:

“Less than a week since signing the global climate deal in Paris, Japan and South Korea are pressing ahead with plans to open scores of new coal-fired power plants, casting doubt on the strength of their commitment to cutting CO2 emissions.   Even as many of the world’s rich nations seek to phase out the use of coal, Asia’s two most developed economies are burning more than ever and plan to add at least 60 new coal-fired power plants over the next 10 years.  Officials at both countries’ energy ministries said those plans were unchanged.”

“Dutch energy companies are burning more coal than ever, despite efforts to produce more green and sustainable energy, according to research by news agency De Persdienst. It says coal-fired power stations in the Netherlands used over seven million kilos of coal in the first nine months of last year, a 15% increase on 2013 and a 36% increase on 2012.”

World Research Institute assesses that ten developing countries are or will be building new coal plants.

“New coal-fired plants have been proposed in 10 developing countries: Cambodia, Dominican Republic, Guatemala, Laos, Morocco, Namibia, Oman, Senegal, Sri Lanka, and Uzbekistan. Currently, there is limited or no capacity for domestic coal production in any of these countries.”

According to a report from The Guardian, the only two wealthy countries that did not expand coal production and consumption since 2009 are the United States and Canada.  For Germany, France, Italy, Japan, and the UK, coal consumption rose by 16% between 2009 and 2013.

“Britain, Germany, Italy, Japan and France together burned 16% more coal in 2013 than 2009 and are planning to further increase construction of coal-fired power stations. Only the US and Canada of the G7 countries meeting on Monday in Berlin have reduced coal consumption since the Copenhagen climate summit in 2009.”

The Paris Agreement was, is, and will be an exercise in futility.  It will not reduce global-scale CO2 emissions, as emissions rates will continue to grow on a net global scale, especially since Asian and Middle Eastern countries continue to “emit as much as they see fit”.

Analysts have suggested that our efforts to mitigate CO2 emissions “will almost surely fail,” and they may “actually make matters worse.”

“To even come close to achieving the goals of the Paris Agreement, 50 percent of our energy will need to come from renewable sources by 2028, and today it is only 9 percent, including hydropower. For a world that wants to fight climate change, the numbers just don’t add up to do it.”

“[A]ll the actions taken together until now to reduce our emissions of carbon dioxide will not achieve a serious reduction, and in some cases, they will actually make matters worse.”

“It is evident that UN efforts to combat climate change are not effective because past experience shows that CO2 generation cuts weren’t near enough.”

23 responses to “New Paper Asks ‘What Does The Paris Agreement Actually Do?’ Answer: Nothing. CO2 Emissions Continue Rising Unabated.”