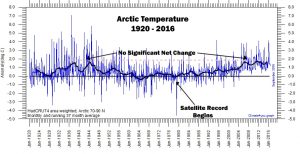 Last week, Edinburgh and Day (2016) used historical monitoring records to conclude that “the [Antarctic sea ice] levels in the early 1900s were in fact similar to today“.   Apparently this was a surprising finding for those who assume anthropogenic greenhouse gases largely determine net changes in polar sea ice.

Perhaps it may also be surprising for those who only focus on the 1979-to-present satellite era to learn that Arctic sea ice has also remained essentially unchanged since the 1930s and 1940s too, and is overall still quite high relative to recent centennial- and millennial-scale historical periods.  Even for the last few decades, the trends are not unusual.

For example, the IPCC referenced NOAA satellite data that extended back to 1972, not 1979, in the first UN report (1990).  It showed that there had been a slight increasing trend in sea ice for 1972-1990 due to the low extent recorded during the early 1970s, and the very high extent in the late 1970s, when the current satellite datasets begin.  Now, the IPCC (and NOAA, NSIDC) discard the 1972-1978 data from the sea ice record, instead using 1979 as the starting point, or the year with the highest sea ice extent since the early 20th century.  This way, the decline in sea ice extent to the present can be steepened considerably in modern graphics. 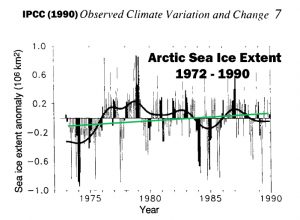 Between 1990 and 2006, Arctic sea ice declined rapidly.  Since 2006, however, the sea ice decline has undergone a pause, as shown in NSIDC data (using WoodForTrees.org interactive graphs): 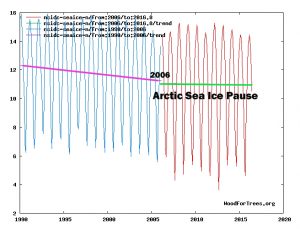 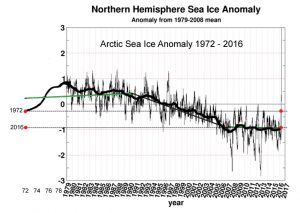 For the early 20th century, there was a dramatic decline in Arctic sea ice between the 1920s and 1940s that was concomitant with the as-warm-as-present Arctic surface temperatures (top graph).  After this abrupt warming trend ended, the Arctic cooled for several decades and a subsequent increase in sea ice occurred through the late 1970s.  Hoffert and Flanney (1985) furnish a graph with recorded sea ice trends for 1920-1975.

Introduction: As described m ore fully in the accompanying state-o f-the-art report on the Detecting the Climatic Effects of Increasing Carbon Dioxide (see Chapter 4 by Wigley et al. 1985), there is no clear indication of a monotonic warming over this period [1880-1980], as would be anticipated from the observed build up of CO2 in the atmosphere. Instead, these data sets indicate a complex picture including interannual variability and, perhaps, some systematic trends. Indeed, the global temperatures seem to have increased from 1885- 1935, and the extent of Arctic sea ice decreased from 1925-1945. This was followed, however, by a leveling off and then a subsequent decrease in temperature. 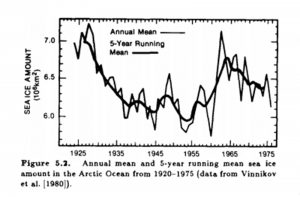 Extending the sea ice record back centuries, we also see that there is nothing unusual about the recent Arctic sea ice extent changes.

Sea surface temperature [Arctic Ocean] between ∼ AD 1885–1935 are warmer by up to 3°C with respect to the average modern temperature at the coring site. For the period ∼ AD 1887–1945, reconstructed sea ice cover values are on average 8.3 months per year which is 1.1 months per year lower than the modern values. 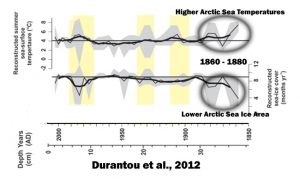 Summer temperatures at Donard Lake [Canadian Arctic] over the past 1250 yrs averaged 2.9 °C.  At the beginning of the 13th century, Donard Lake experienced one of the largest climatic transitions in over a millennium. Average summer temperatures rose rapidly by nearly 2 °C from 1195–1220 AD [+0.80 C per decade], ending in the warmest decade in the record (~4.3 °C).    A dramatic warming event is seen around the same time (~1160 AD) in a tree-ring width record from Fennoscandia (Briffa et al., 1990). The rapid warming at Donard Lake was followed by a period of extended warmth, with average summer temperatures of 3.4 °C. This time of warm summer temperatures corresponds to the period when Thule Inuit moved into the Canadian Arctic from Alaska using open boats and hunting whale. A ~150–200 yr period of increased temperature around the same time is also seen in historical records of mild conditions allowing the expansion of settlements in Greenland (McGovern, 1991), and radiocarbon-dated records of glacial advance and retreat from numerous glaciers throughout the Kenai peninsula in Alaska (Wiles & Calkin, 1995), as well as humifaction records from Irish peat bogs (Blackford & Chambers, 1995). 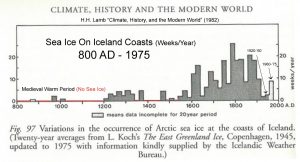 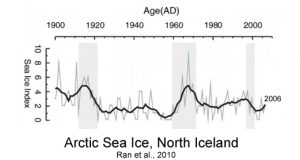 Finally, many scientists acknowledge that Arctic sea ice trends are naturally determined, and anthropogenic CO2 emissions have little to do with decadal-scale variations.  Below are just a few examples.

Solar forcing as an important trigger for West Greenland sea-ice variability over the last millennium … Here, we use diatom assemblages from a marine sediment core collected from the West Greenland shelf to reconstruct changes in sea-ice cover over the last millennium. The proxy-based reconstruction demonstrates a generally strong link between changes in sea-ice cover and solar variability during the last millennium. Weaker (or stronger) solar forcing may result in the increase (or decrease) in sea-ice cover west of Greenland. In addition, model simulations show that variations in solar activity not only affect local sea-ice formation, but also control the sea-ice transport from the Arctic Ocean through a sea-ice–ocean–atmosphere feedback mechanism.

A better understanding of the future climate pattern developments in the Arctic may only follow a better reconstruction of the past patterns of natural oscillations and the determination of the forcing and the resulting oscillations occurred in the climate parameters over different time scales. The proposed information for the past demonstrates the Walsh & Chapman reconstruction claiming a flat sea ice 1870 to 1950 is too simple. The Arctic sea ice experienced a drastic reduction that was phased with warming temperatures 1923 to 1940. This reduction was followed by a sharp cooling and sea ice recovery. This permits us to also conclude that very likely the Arctic sea ice extent also has a quasi-60 years’ oscillation. The recognition of a quasi-60 year’s oscillation in the sea ice extent of the Arctic similar to the oscillation of the temperatures and the other climate indices may permit us to separate the natural from the anthropogenic forcing of the Arctic sea ice. The heliosphere and the Earth’s magnetosphere may have much stronger influence on the climate patterns on Earth including the Arctic sea ices than has been thought.

Multi-decadal variation of the East Greenland Sea-Ice Extent: AD 1500-2000 … The extent of ice in the North Atlantic varies in time with time scales stretching to centennial, and the cause of these variations is discussed. We consider the Koch ice index which describes the amount of ice sighted from Iceland, in the period 1150 to 1983 AD. This measure of ice extent is a non-linear and curtailed measure of the amount of ice in the Greenland Sea, but gives an overall view of the amounts of ice there through more than 800 years.  [W]e find that the recently reported retreat of the ice in the Greenland Sea  may be related to the termination of the so-called Little Ice Age in the early twentieth century. We also look at the approximately 80 year variability of the Koch [sea ice] index and compare it to the similar periodicity found in the solar cycle length, which is a measure of solar activity. A close correlation (R=0.67) of high significance (0.5 % probability of a chance occurrence) is found between the two patterns, suggesting a link from solar activity to the Arctic Ocean climate. … The ’low frequency oscillation’ that dominated the ice export through the Fram Strait as well as the extension of the sea-ice in the Greenland Sea and Davis Strait in the twentieth century may therefore be regarded as part of a pattern that has existed through at least four centuries. The pattern is a natural feature, related to varying solar activity. The considerations of the impact of natural sources of variability on arctic ice extent are of relevance for concerns that the current withdrawal of ice may entirely be due to human activity. Apparently, a considerable fraction of the current withdrawal could be a natural occurrence.