Dr. Sebastian Lüning and Prof. Fritz Vahrenholt here bring our attention on a recent paper on the impact of “sea smell” on climate. Below is the press release in English. 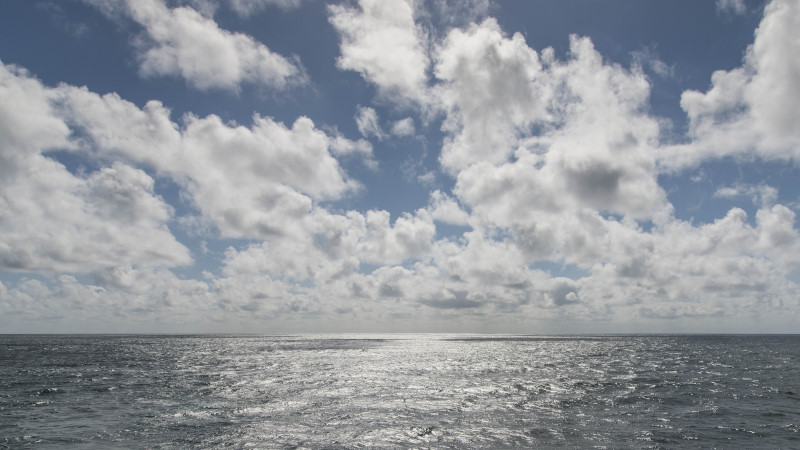 The formation of sulfur dioxide from the oxidation of dimethyl sulfide (DMS) and, thus, of cooling clouds over the oceans seems to be overvalued in current climate models. Photo: Tilo Arnhold, TROPOS

Leipzig. The formation of sulfur dioxide from the oxidation of dimethyl sulfide (DMS) and, thus, of cooling clouds over the oceans seems to be overvalued in current climate models. This concludes scientists from the Leibniz Institute for Tropospheric Research (TROPOS) from a model study on the effects of DMS on atmospheric chemistry. Until now, models considering only the oxidation in the gas phase describe merely the oxidation pathway and neglect important pathways in the aqueous phase of the atmosphere, writes the team in the journal PNAS. This publication contains until now the most comprehensive mechanistic study on the multiphase oxidation of this compound. The results have shown that in order to improve the understanding of the atmospheric chemistry and its climate effects over the oceans, a more detailed knowledge about the multiphase oxidation of DMS and its oxidation products is necessary. Furthermore, it is also needed to increase the accuracy of climate prediction.

Dimethyl sulfide (DMS) is formed by microorganisms and is, for example, also part of human breath odor. However, it is more pleasant to remember as the typical smell of the sea. DMS represents the most common natural sulfur compound emitted to the atmosphere. Major contributors are oceans, which make up around 70 % of Earth’s surface. DMS is formed by phytoplankton and then released from the seawater. In the atmosphere, DMS oxidizes to sulfuric acid (H2SO4) via dimethyl sulfoxide (DMSO) and sulfur dioxide (SO2). Sulfuric acid can form new cloud nuclei, from which new cloud droplets can emerge. Hence, marine clouds will be visually brightened, which influences the radiative effect of clouds and thus Earth’s climate. Therefore, the understanding and quantification of these chemical processes in the atmosphere is of high importance for the knowledge of the natural climate effect.

The oxidation process of DMS has already been investigated in various model studies – albeit without accurate considered aqueous-phase chemistry. In order to close these mechanistic gaps, scientists of TROPOS have developed a comprehensive multiphase chemical mechanism (“Chemical Aqueous Phase Radical Mechanism DMS Module 1.0”). This mechanism was coupled to a comprehensive gas-phase (MCMv3.2) and aqueous-phase mechanism (CAPRAM) and applied with the SPACCIM model. The SPACCIM model was developed at TROPOS and is, due to the detailed and combined description of microphysical and chemical processes in aerosols and clouds, particularly suitable for complex studies on atmospheric multiphase processes.

As most important outcome, the new model results showed that: “The processes in the aqueous phase significantly reduce the amount of sulfur dioxide and increase the amount of methanesulfonic acid (MSA). In earlier models, there was a gap between the projected values in the model and measurements. Now, the scientists have been able to clarify this contradiction and thus confirm the importance of the aqueous phase for the atmospheric oxidation of dimethyl sulfide and its products such as MSA”, reports Dr. Andreas Tilgner of TROPOS.

The results show that the role of DMS in Earth’s climate is still not sufficiently understood – despite many global model studies. “Our simulations indicate that the increased DMS emissions lead to higher aerosol particle mass loads but not necessarily to a higher number of particles or cloud droplets. The modeling results are important to understand the climate processes between ocean and atmosphere. In addition, geoengineering ideas are constantly being discussed, which are hoping for more cooling clouds by fertilizing the ocean”, explains Prof. Hartmut Herrmann from TROPOS. However, this study suggests that the production of sulfur dioxide is less pronounced and the effects on the back-reflection effect of the clouds are lower than expected. Therefore, the corresponding geoengineering approaches could be less effective than assumed. Tilo Arnhold

The Leibniz Association connects 88 independent research institutions that range in focus from the natural, engineering and environmental sciences via economics, spatial and social sciences to the humanities. Leibniz institutes address issues of social, economic and ecological relevance. They conduct knowledge-driven and applied basic research, maintain scientific infrastructure and provide research-based services. The Leibniz Association identifies focus areas for knowledge transfer to policy-makers, academia, business and the public. Leibniz institutions collaborate intensively with universities – in the form of “Leibniz ScienceCampi” (thematic partnerships between university and non-university research institutes), for example – as well as with industry and other partners at home and abroad. They are subject to an independent evaluation procedure that is unparalleled in its transparency. Due to the  importance of the institutions for the country as a whole, they are funded jointly by the Federation and the Länder, employing some 18,500 individuals, including 9,300 researchers. The entire budget of all the institutes is approximately 1.7 billion EUR. http://www.leibniz-gemeinschaft.de/en/home/