Shock Freeze A Harbinger Of Things To Come? The Many Signs Of More Cooling!

As Europe and USA brace for more frigid weather, some are asking if this is what we need to expect to cope with in the future.

Now it’s clear that the recent “record warm” 2 years had little to do with CO2, and instead were almost entirely due to the well-known El-Nino phenomenon over the past two years.

And now that the recent El Nino has disappeared, temperatures globally are in a free fall and back at levels of the previous decade and indications show a further  drop. 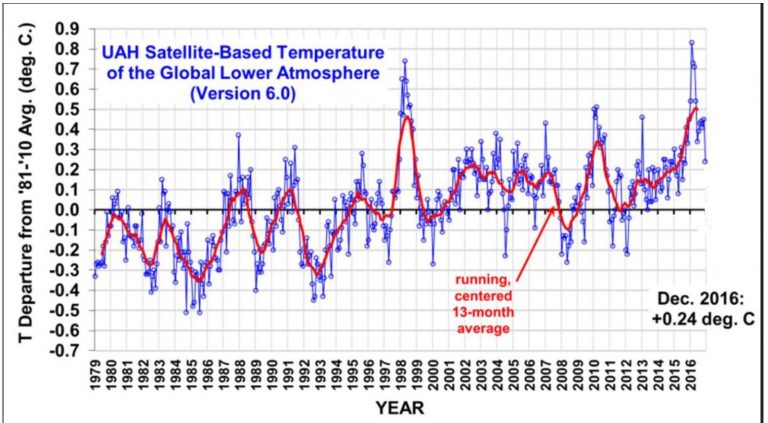 The ENSO now in cool phase

Unfortunately even that enhanced layer of CO2 we have in the atmosphere was not able to trap any of the recent heat. The 20-year pause remains pretty much intact, and will be extended as the El Nino Southern Oscillation (ENSO) hovers near the cooling La Nina territory.

Note that it will take the cooler equatorial Pacific surface temperatures a few months to make there way into the lower tropospheric satellite data. Don’t be surprised if this year we see a repeat of 1999.

Dr. Roy Spencer here wrote that 2016 will in fact NOT be statistically warmer of any significance compared to 1998.

According to global warming theory, the earth is supposed to warm some 2.0 to 4.5°C by 2100, which means 0.2 – 0.45°C per decade. So shouldn’t the recent El Nino have warmed the globe some 0.4 to 0.8°C more than 1998? Not even close, as the speedometer below shows! For hardcore warmists, it is increasingly becoming a huge challenge to explain the glaring lack of warming so far this century.

The IPCC climate models for the temperature development have been way too high with their estimation as the comparison of the model calculations to the real, observed development recorded by satellite for January 2001 to Juni 2016.

The Global Warming Speedometer for January 2001 to June 2016 shows observed warming on the HadCRUT4 and NCEI surface temperature datasets as below IPCC’s least prediction in 1990 and somewhat on the low side of its 1995 and 2001 predictions, while the satellite datasets show less warming than all IPCC predictions from 1990 to 2001. Later IPCC predictions are too recent to be reliably testable. Source: Is the Reuters “news” agency committing fraud?“

Things also do not bode well for the global warming alarmists in the Atlantic as well, as Kenneth Richard pointed out here yesterday: “North Atlantic Cooling Has Plunged Below 1950s (And 1800s) Levels – And Scientists Project More Cooling“.

Solar activity is also now at a low point as the current cycle winds down. meanwhile a majority of scientists are confident the next cycle will also be a weak one. Periods of weak solar cycles are associated with periods of global cooling.

And although Arctic temperatures have been well above normal this winter, Greenland’s surface ice mass continues at its rampage record level:

Currently Europe is being gripped by an intense cold wave, one that has sent temperatures in Germany to as low as -27°C this morning. 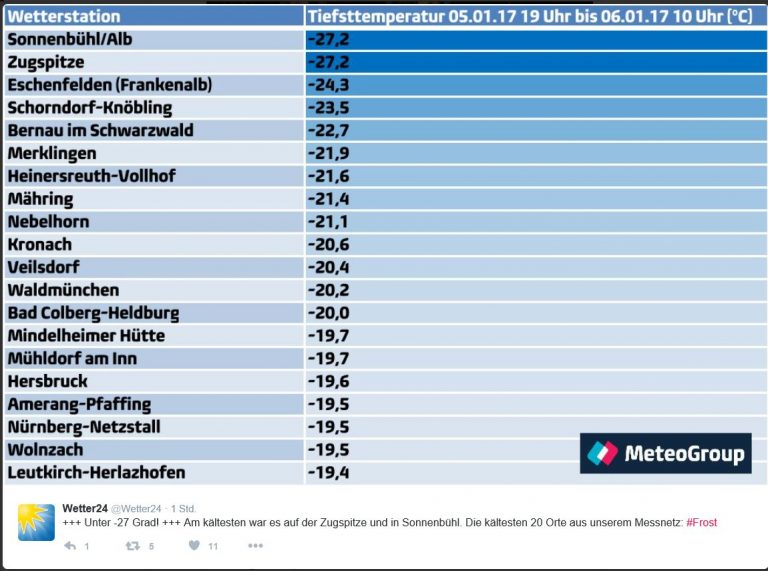 A number of stations recorded readings under -20°C. Image: Wetter24.

USA is also bracing for a cold wave — one that is going to intensify and send temperatures far below normal over the coming days.

Temperatures in the southwest close to 40°C below (6 a.m. EST). Image cropped from earth.nullschool.net

17 responses to “Shock Freeze A Harbinger Of Things To Come? The Many Signs Of More Cooling!”