When it comes to the treatment and handling of refugees, it turns out that European leaders are the very last people who should be preaching morality to President Trump. Their total incompetence have cost thousands of refugee lives, and the situation is only getting much worse. They own it. A refugee from Afghanistan holds his young son and looks at the sea after reaching the shores of Lesvos island, Greece, in this 2015 file photo.   © UNHCR/Achilleas Zavallis, Source: UNHCR here.

The truth is that Europe’s handling of refugees coming from North Africa and the Middle East is a disaster of colossal dimensions. Since 2009, approximately 15,000 refugees have perished in the Mediterranean, right at Europe’s very doorstep.

Yet, Europe’s and America’s mainstream media, politicians and the hodge-podge of Soros-funded protest groups remain completely oblivious to this historic tragedy. Instead they are now rushing to condemn President Trump and his executive order, and expressing “outrage” over a few dozen refugees being held up inside an airport for a few hours.

What could Trump possibly learn from Europe on how to handle refugees?

The answer is absolutely nothing…unless he is looking for a case study on how to drown thousands of them each and every year. When it comes to “welcoming” refugees, Europe’s approach has been lethal and bungled like nothing we have ever seen.

Looking at the annual refugee deaths on the Mediterranean since 1990, the number each year until 2012 stayed relatively low, fluctuating at around 100 deaths each year. However, starting in 2013, just after the start of the Arab Spring, the Libyan Civil War, the Syrian Civil War (all orchestrated with the direct involvement of the US government and Europe), and the US withdrawal from Iraq, refugee deaths in the Mediterranean surged to 477 for the year — all without a finger of protest from activists. 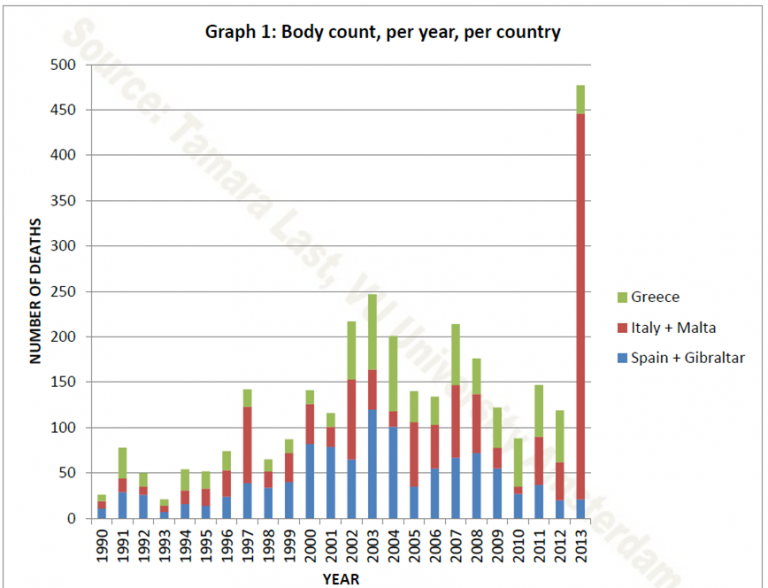 From 1990 – 2013, a total of 3188 refugees died trying to reach Europe. With the beginning of Obama’s 2nd term, the number exploded. Source: borderdeaths.org.

More than ten-fold jump, to 3500 drownings

In 2014 the number jumped more than ten-fold, with over 3500 deaths of migrants/refugees crossing the Mediterranean being reported, according to the UNHCR. 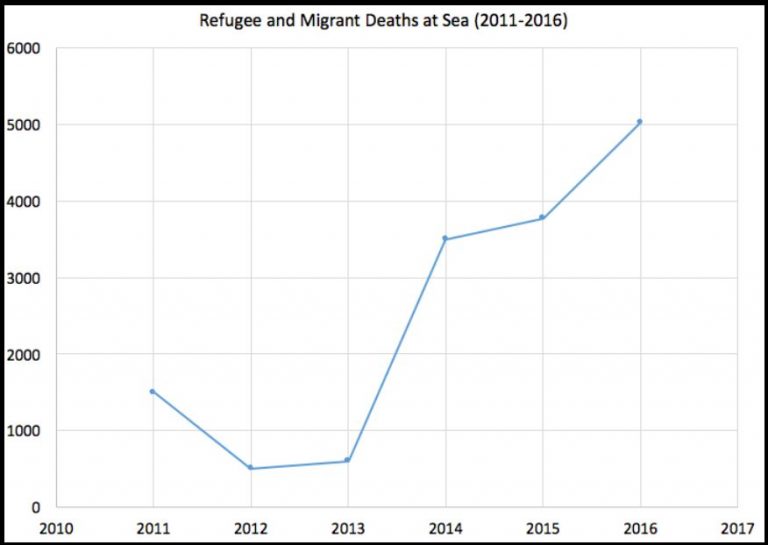 Since the Obama/Europe-supported Arab Spring began in 2009, approximately 15,000 refugees have died trying to reach Europe over the Mediterranean. Europe has let it all happen.

European leaders were well aware of the crisis long ago, yet did little to effectively respond to it — seemingly hoping the situation would somehow just go away on its own. Few, if any, efforts were undertaken to make passage for the refugees safer. Instead European politicians dithered and fell over themselves like pigs on a skating rink.

A system to better ensure safe passage of the refugees never got set up. The sinkings and drownings continued by the hundreds. There were no angry protests aimed at governments to stop the carnage. Pleas for help from Italy, Greece and Turkey were played down or flat out ignored. Activists and leaders even tried to blame it all on “climate change”!

Recall: this is the very continent that today is expressing its outrage at President Trump, because a few dozen refugees got held up at a New York airport for a few hours.

It wasn’t until 2015, after hundreds of thousands of refugees had poured into Germany, did Angela Merkel and other European leaders move to take the refugee problem a bit more seriously — and it wasn’t because Merkel wanted to do so, but because she had been forced to do so. Europe had totally lost control of the refugee flow, which they themselves had initiated through their disastrous Middle East and North Africa destabilization rampage over the past years.

Now that 2016 has come to a close and the first month of 2017 is behind us, one could expect Europe to have perhaps gained some degree of control over the disaster by now. Unfortunately you would be very wrong to think so. Europe’s refugee catastrophe has in fact worsened and become the shame of the world.

My God, freezing to death in “compassionate and moral” Europe. This doesn’t deserve outrage and protest?

Despite all the charges and outrage launched at Trump, it is clear that it is in fact Europe that is totally incompetent and nowhere near a solution for the refugee crisis. Refugees keep drowning by the hundreds. They’ll never fix it.

This glaring incompetence is precisely why the European Union is being increasingly rejected, and why Donald Trump was elected. There is a growing sense that the ones who created the huge mess will only make it worse. It’s time for Europe to get out of the way and to work with Trump, and not against him, and to do so for the sake of thousands of future refugee lives.