According the DWD’s approximately 2000 stations scattered across the country, January’s mean temperature came in 2.7°C colder than the 1981-2010 mean. Especially southern Germany was cold, as was its neighbor Austria, see below.

The lowest recorded temperature in Germany was measured in Reit im Winkl: -26.3°C. Most of the precipitation this past January, which was 27% below normal, fell as snow.

The DWD attributed the colder temperatures to a wintry weather pattern.

The European Institute for Climate and Energy (EIKE) has analyzed the German data for the Erfurt-Weimar station and has found that there has been no warming in January over the past 45 years (since 1973): 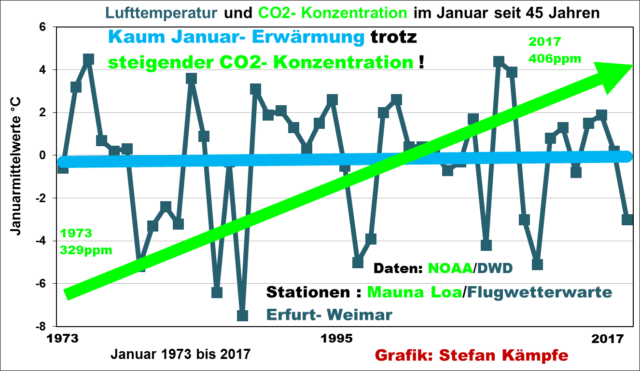 Josef Kowatsch also analyzed Germany’s January temperature trend and found that the month has in fact cooled almost 2°C over the past 25 years. I’ll see if I can chase down his chart.

EIKE also looked at the Central England January temperature record and found that there has only been a slight warming over the past 105 years!

In fact the warmest years in Central England were recorded in the early part of the 20th century. 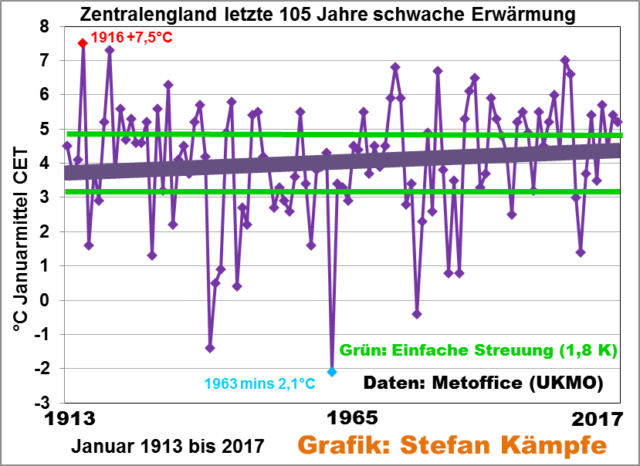 Meanwhile Austria’s ZAMG national weather service reports that January 2017 in the country was “extraordinarily cold”, the second coldest in 30 years, with the preliminary mean coming in at 3.0°C below the long term 1981-2010 mean.

The chart shows the temperature deviation from the mean.