Station At Germany’s Highest Summit Measures Midwinter Cooling Of Over -3°C Over Past 30 Years!

The summit of Germany’s tallest mountain, Zugspitze, located in the Bavarian Alps near the Austrian border, is 2,962 meters high and thus well isolated from any temperature data corruption sources, such as urban sprawl.

The weather station at the “Top of Germany” has measured 3°C of cooling for the month of January over the past thirty years. Photo cropped here.

The Zugspitze’s peak find itself at an elevation where global warming theory tells us the warming would really be most noticeable. However the January data over the past 30 years tell us a very different story. Instead of warming, the atmosphere at that location above Europe has been cooling, and doing so quite impressively.

Josef Kowatsch, a self proclaimed “active environmentalist and independent researcher” has crunched the data for January from Germany’s DWD National Weather Service himself and found the following for the Zugspitze station: 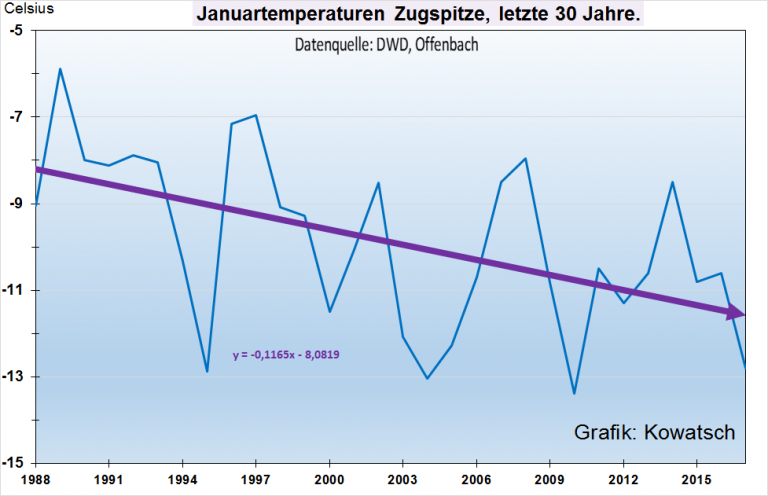 January mean temperature at the summit of the Zugspitze over the past 30 years has plummeted over 3°C. Chart: Josef Kowatsch.

He comments that our supposedly independent media — the DPA and the AFP — have maintained that “winter has been continuously warming. But this is how the warming looks at the Zugspitze.”

Another interesting aspect about the Zugspitze is the movement of its Höllentalferner glacier. According to Wikipedia here, “the Höllentalferner reached its greatest around 1820 with an area of 47 hectares. Thereafter its area reduced continually until the period between 1950 and 1981 when it grew again, by 3.1 hectares to 30.2 hectares. Since then the glacier has lost (as at 2006) an area of 5.5 hectares and now has an area of 24.7 hectares.”

That means the glacier GREW during the 1950 to 1981 period – fully in line with the global cooling period of the 20th century, which NASA has recently been trying to fudge out. Also it tells us the retreat began well before the start of the industrial revolution, and thus natural factors are more at play.

33 responses to “Station At Germany’s Highest Summit Measures Midwinter Cooling Of Over -3°C Over Past 30 Years!”