News site t-online.de here writes that visitors to the German Ministry of Environment will be served only vegetarian food, according to German daily Bild.

The order comes from the Environment Minister Barbara Hendricks (Socialist Party) herself. According to reports, food service companies that cater events held at the Ministry are not to provide fish or meat, or products made of meat. The rule has been in effect since February 1st. Also catered food must come from organic farms, be seasonal and locally produced with short transport distances.”

The reason for the new policy? According to the report, the Ministry must act as a “role model” in the fight against the “effects of meat consumption“.

The dictation of people’s lifestyles does not only end at the Environment Ministry banning meat and fish at its events. but according to topagrar.com here, the Ministry is also calling for higher taxation nationwide on “animal products such as milk and meat“. 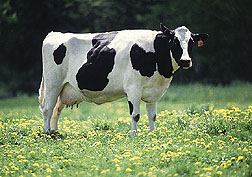 If the German government gets its way, soon a nutritious and balanced diet will become a luxury that only the rich will be able to afford. The poor will be forced to devolve to diets of herbivores, a level down the food chain. In summary: biological devolution seems to be the new direction of progress in Germany and radical environmentalists. Better to become a lowly herbivore than to risk warming the planet by a degree or two.

Humans are to be herded down the food-chain…back millions of years in evolution.

According to UBA president Maria Krautzberger: “Animal food products need to be taxed at the regular 19% VAT rate.” In Germany food is taxed at a 7% VAT rate. With the added revenue, the Ministry says it aims to lower the tax on plant products. “This will protect the climate and will be less a burden on the taxpayer,” she said. According to topagrar.de, the aim is to reduce greenhouse gas emissions.

The Ministry blames the agricultural industry for being one of the country’s top greenhouse gas emitters. It claims that the production of one kilogram of beef causes between 7 and 28 kilograms of greenhouse gases, whereby 1 kg of fruit or vegetables emits less than a kilogram.

In response, the German association of farming (DBV) sharply criticizes the plans, accusing the Ministry of using misleading figures and focusing in the wrong areas.

DBV president Joachim Rukwied said: “A penalty tax on food will have no positive benefit on climate, but rather will only make the daily purchases made by consumers more expensive.”

Topagrar.de points out that agriculture in fact represents only a small fraction of the total greenhouse gas emissions: 7%, and so the focus is misplaced. Rukwied criticizes:

It is totally incomprehensible how agricultural animal farming can be put in the front row of climate sinners.”

Milk and milk products are among the fundamental food staples of German citizens. Families with small children, and thus having a high milk consumption, and people with low incomes will be forced to pay disproportionately more.”

The National Union of the Food Industry (BVE) has come out against the ecological control taxation on food, saying that it will only serve to “make products more expensive, distort the market and add more bureaucracy“.