The statistics arm of the European Union, Eurostat, has released recent figures on energy consumption. They are a huge disappointment and show that the community has only succeeded at wasting hundreds of billions of euros, while having no impact on the climate.

Also the share of fossil fuels in total energy consumption in the EU remains stubbornly high: 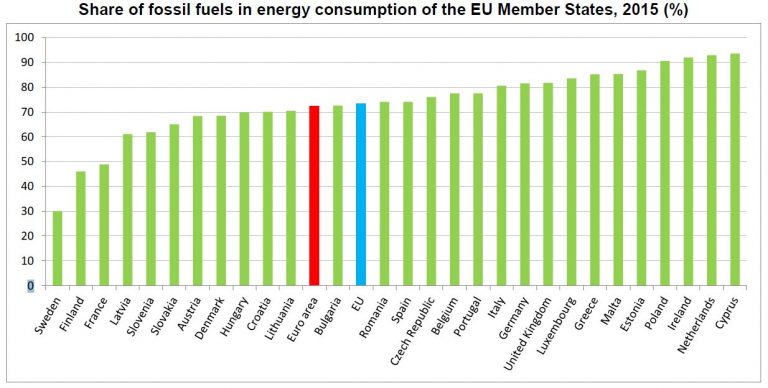 For the money, Europe will contribute theoretically only a very few tenths of degree less warming to the global climate by the year 2100.
Though energy consumption in the EU is below its 1990 level, EU dependency on fossil fuel imports is on the rise: 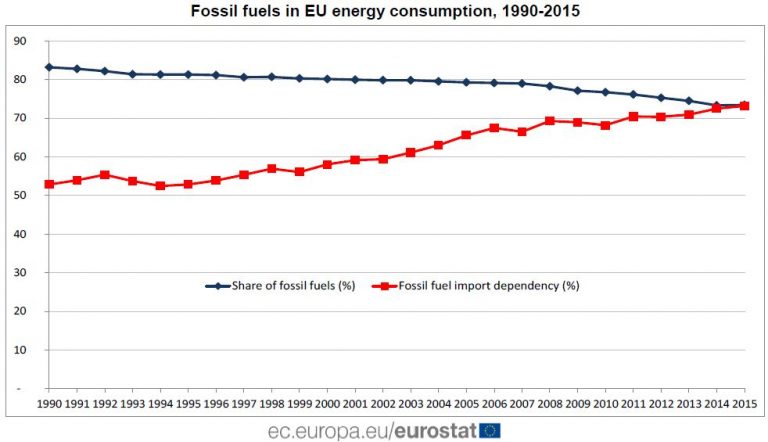 In 2015, gross inland energy consumption, which reflects the energy quantities necessary to satisfy all inland consumption, amounted in the European Union (EU) to 1,626 million tonnes of oil equivalent (Mtoe), below its 1990 level (-2.5%) and down by 11.6% compared to its peak of almost 1,840 Mtoe in 2006.

Accounting for nearly three-quarters of EU consumption of energy in 2015, fossil fuels continued to represent by far the main source of energy, although their weight has constantly decreased over the past decades, from 83% in 1990 to 73% in 2015. However, over this period, EU dependency on imports of fossils fuels has increased, with 73% imported in 2015 compared with just over half (53%) in 1990.

Based on EU 2012 directives, EU renewable energy share is supposed to be at least 27% of the electric power production 2030. And according to an EU 2014 agreement, greenhouse gas emissions is supposed to be 40 percent less, a target that climate protection activists say is too little!

Though statistics showing considerable greenhouse gas reductions since 1990, the vast majority of it happened right after the shut down of the dilapidated, communist run industries in the first years after the fall of the Iron Curtain. There has been little progress since.