Once ballyhooed as a cheap source of energy (“The sun doesn’t send an electric bill”), Germany’s attempted transition to wind and solar energy is rapidly heading towards a full-blown central planning folly of historic dimensions.

The German electricity consumer advocacy group NAEB projects that Germany’s electric power rates will continue to soar, possibly reaching an industry back-breaking 45 euro cents per kilowatt-hour by 2020, and even higher over the years that follow. 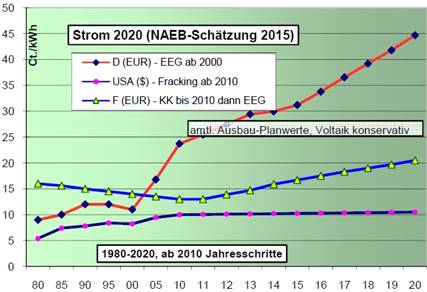 NAEB power price projections for 2020. Note that the horizontal scale changes at the year 2010 in order to condense the chart. The upper curve shows German electricity prices in euro-cents per kilowatt-hour, the middle curve shows the price for France and the lower curve for the USA. Source: NAEB.

Currently German power costs about 30 euro-cents per kilowatt-hour, and so are among the highest worldwide. The price is projected to soar another 50% rise to 45 cents by 2020. That would make German power 4 times more expensive than US power, and more than double that of France. This poses a real threat to German economic competitiveness.

Although the growth in German electricity prices have slowed some since 2015, the gap between German prices and other competing countries is as gaping as ever, with no relief in sight. In fact USA’s prices could even soon begin to ease off.

For the Germany curve, one clearly sees the effects of market liberalization starting in the mid 1990s. Since 2000 the Energiewende mercilessly went into action! In 2015 we updated the estimates.”

The trend bodes ill for Germany’s energy-intensive sectors such as chemicals, glass and cement. The growing chasm compared to prices in USA and France risks a severe erosion of Germany’s domestic industry and long-term economic growth.

51 responses to “German Electricity Price Projected To Quadruple By 2020, To Over 40 Cents Per Kilowatt-Hour!”