In a late February (2017) interview on a U.S. news program, mechanical engineer Bill Nye claimed that the settled science says humans have been warming the planet at a rate that is  unnaturally and “catastrophically” fast since the year 1750 .

“It’s a settled question. The speed that climate change is happening is caused by humans.  Instead of climate change happening on timescales of millions of years or 15,000 years, it’s happening on the timescale of decades, and now years. …  Humans are causing it [climate change] to happen catastrophically fast.   [Without human activity], the climate would be like it was in 1750.”

Apparently Bill Nye believes it is quite unusual to grow grapes in England. Or maybe he believes that this has never happened before given his perceptions of the unprecedentedly fast pace of climate change since 1750. Perhaps he doesn’t realize that grape vineyards have been growing in England for thousands of years, or that grape harvesting occurred 100s of kilometers further north than it does today as recently as during the latter stages of the Medieval Warm Period (~1100 to 1300 A.D).

Considering how very sensitive grapes are to climate conditions, and that grapes can only be harvested successfully after ripening in climates that average a specified number of warm days per year, the use of grape harvest dating as a proxy for temperature has long been thought to be both promising and reliable.

Unfortunately for Bill Nye and those who believe modern warmth is exceptional, or that the climate has changed at a catastrophically fast pace since 1750, scientists who use grape harvest dates to reconstruct historical temperatures have not found that modern warmth is either unusual or unprecedented.  In fact, grape harvest date evidence suggests the opposite conclusion reached by Bill Nye is more accurate: there is nothing unusual about the modern climate and its “well-suitedness” to grape harvesting.  In fact, there were several periods of greater warmth than today (and thus better suitability for grape harvesting) during the multi-centennial (~1400-1900 A.D.) Little Ice Age — which had the coldest temperatures of the last 10,000 years.

In other words, there is nothing unusual, unprecedented, or remarkable — let alone “catastrophically fast” — about either the pace or degree of warmth in the modern climate.

“The Medieval Warm Period (MWP) was a time of warm climate from about 900 A.D. to 1300 A.D. when global temperatures were apparently somewhat warmer than at present. Its effects were evident in Europe where grain crops flourished, alpine tree lines rose, many new cities arose, and the population more than doubled. The Vikings took advantage of the climatic amelioration to colonize Greenland, and wine grapes were grown as far north as England where growing grapes is now not feasible and about 500 km north of present vineyards in France and Germany. Grapes are presently grown in Germany up to elevations of about 560 m, but from about 1100 A.D. to 1300 A.D., vineyards extended up to 780 m, implying temperatures warmer by about 1.0-1.4°C (Oliver, 1973). Wheat and oats were grown around Trondheim, Norway, suggesting climates about 1°C warmer than present (Fagan, 2000).”

“In 1420 wine harvest in Western and Central Europe began at the end of August, even on altitudes of 500 to 700 m (Bern, Toggenburg). This is the earliest date ever recorded. …  In 1420 the warm phase started in February. In March summer began already. The vine bloom was two weeks earlier than in 1893- the most advanced year within the instrumental period.”

“The comparison of the phenophases in 1420 and 1540 with the corresponding extremes documented with thermometrical evidence suggests that in 1420 all months from February to August (in 1540 from April to August) may have been 2 to 3 degrees above the 1901-60 average.  … [I]n 1270 and 1304 the early burgundy grapes were ripe at about the same time as in 1540, whereas in 1331 the ripening of the first cherries in Western France and the beginning of the wine harvest in Paris coincided roughly with the corresponding phenophases in 1420.”

“In 1420 the first ‘new wine’ from these grapes was drunk at the beginning of August, in 1540 on August 15, about twenty days before the wine harvest was opened. If this delay was the same in ordinary years, the mean grape harvest date would be around September 1st in the High Middle Ages, which is a few days earlier than in the warmest summers documented with thermometric measurement. From a regression approach comparing the decennial means of wine harvest dates and temperatures from 1370 to 1850 it has been estimated that an opening of the harvest on September 1st corresponds to a mean temperature from April to September that is 1.7 (+ -0.2) degrees above the average for 1901-60.”

“In the four years 1774, 1777, 1779, 1781, the only ones documented by thermometrical measurement, temperatures in August and September were 2.0 degrees above the 1901-60 average. From 1269 to 1339 positive anomalies [like these] occurred more than once every decade on average; this suggests that they were part of the “normal” climatic pattern; after 1340 their frequency drops to a level of 5%, after 1400 they became very rare. Not a single occurrence is measured for the seventeenth century. Since 1781 they have not been recorded any more. Undoubtedly the early fourteenth century marks a climatic watershed. The frequent occurrence of high maximum densities before 1330 can be interpreted in the context of a warm climate to which an advance in the beginning of the grape harvest is connected. It may be hypothesized that summers which were outstanding according to the standards of later periods, such as those of 1420, 1473 or 1540 were within the normal range of fluctuations during the High Middle Ages.” 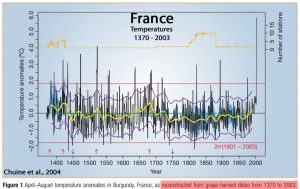 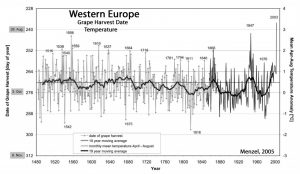 “This paper reports a climatic reconstruction approach for the Minho region (NW of Portugal) using grape harvest dates (GHD) as proxy of surface air temperature. … The major external forcing of the climate system derives from the Sun. A solar signature has been found in global mean surface temperatures, with evidence directly related to two noticeably different features of the Sun’s dynamics: its short-term irradiance fluctuations and secular patterns of 22-year and 11-year cycles (Scafetta and West, 2008). … [I]t is recognized that solar forcing manifestations denote a strong spatial and seasonal variability (Usoskin et al., 2006), and this would be the reason why it might be illusive to seek a single global relationship between climate and solar activity (de Jager, 2005). Thus, Le Mouël et al. (2009) stated that a regional approach may allow one to identify specific forms of solar forcing, where and when the solar input is most important. … [S]olar footprints on terrestrial temperatures [are] due to the strong non-linear hydrodynamic interactions across the Earth’s surface, and the accepted longer-term solar activity influence creating temperature oscillations for tens or even hundreds of years (Scafetta and West, 2003, 2007, 2008). … These spectral analysis results appear to support a solar forcing with regards to Minho GHD [grape harvest dates].” 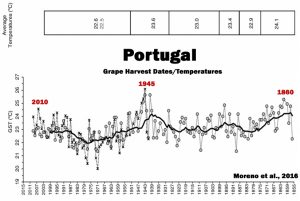 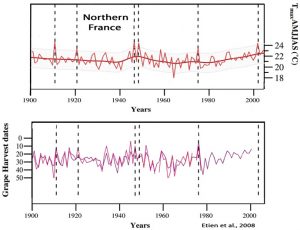 75 responses to “Historical Grape Harvest Dates Show Modern Temperatures No Warmer Now Than Most Of The Last 1,000 Years”