A new paper by Horst-Joachim Lüdecke and Carl Otto Weiss appearing in the Journal of Geography, Environment and Earth Science International has found: “the increase of atmospheric CO2 will gradually come to an end” and that the “the ocean as well as the biosphere will be the primary sinks of future CO2 emissions of mankind“.

Try as hard as mankind may, but according to the results of this paper we may in fact never even succeed in doubling the pre-industrial atmospheric CO2 concentration.

The authors found that a maximum of 500-800 ppm will be reached. Today we are at just over 400 ppm. What follows is the abstract:

The carbon dioxide information analysis center (CDIAC) provides a remarkable 163 years of data on atmospheric CO2 concentrations, man-made CO2 emissions, and from 1959 onwards CO2 net-fluxes into oceans and biosphere. Currently, half of the anthropogenic CO2 emissions remain in the atmosphere. Predominantly the ocean and the biosphere absorb the second half in about equal parts. We describe the anthropogenically forced CO2 dynamics by a linear model of only two parameters which represent physics and biological laws. Our model reproduces the CDIAC measurements perfectly, and allows thus predictions for the future. It does not deal with the equilibrium exchanges of CO2 between atmosphere, oceans and biosphere, but treats merely the net-fluxes resulting from the perturbation of the equilibrium by the anthropogenic emissions. Details as yielded by tracer measurements or ocean chemistry are not required. We applied the model for a tentative projection of the future CO2 cycle based on prospective anthropogenic emission scenarios from the literature. As a result, the increase of atmospheric CO2 will gradually come to an end and the ocean as well as the biosphere will be the primary sinks of future CO2 emissions of mankind.

The authors devised a model that describes the net flows of anthropogenic CO2 into the atmosphere, the oceans and the biosphere.

Integration yields the CO2 amounts taken up by these sinks. Since the CO2 content of the oceans is more than 40 times larger than that of the atmosphere, the flow into the oceans can be described by the linear mass action law. This flow is proportional to the difference of partial CO2 pressures in oceans and atmosphere with a proportionality factor. While the CO2 partial pressure in the atmosphere changes, the CO2 partial pressure of the ocean remains practically constant.

The CO2 flow from atmosphere to biosphere can equally be described linearly. It is assumed to be proportional to the CO2 flow into the atmosphere. This assumption is plausible since increased concentration of CO2 results in linearly increased plant growth.

As the authors state in the abstract, their model reproduces the CDIAC measurements perfectly, and thus allows predictions for the future. The authors summarize that assuming the strongest human emission scenario of burning all global carbon resources the main result concerning the future CO2 content of the atmosphere is that it cannot exceed about 800 ppm. 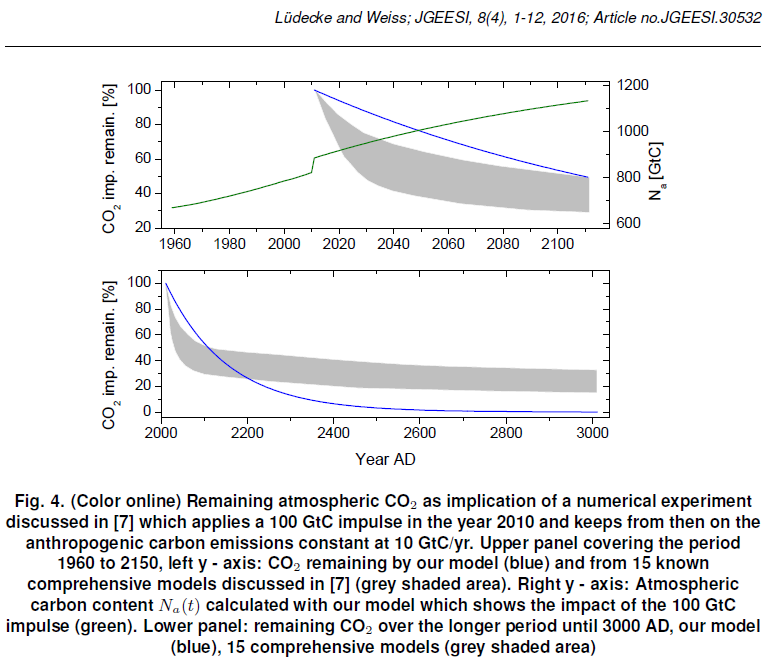