One of the nation’s leading scientists Dr. Roy Spencer of the University of Alabama reports at his website that 7 shots were fired at the National Space Science and Technology Center in Huntsville Alabama, all hitting the fourth floor where the office of renowned pioneering climate scientist Prof. John Christy is located. 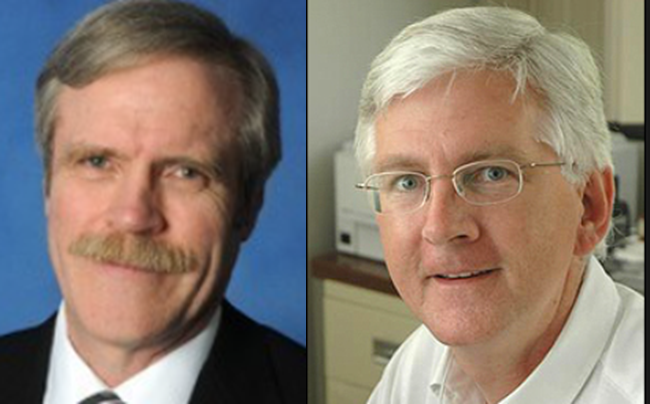 It is suspected that the shots were fired over the weekend during the “March for Science” demonstration. Dr. Spencer’s office is located in another part of the same building.

“I think this is more than a coincidence,” Spencer wrote at his site.

Both Spencer and Christy have been outspoken critics of the climate science alarmism often spread by alarmist scientists, militant environmental activists and mass media.

For years they and a number of researchers have claimed that the models have severely exaggerated the projected warming by greenhouse gases emitted by man and that observations over the past 20 years for the most part refute the theory.

A shaken Spencer writes at his site:

A total of seven shots were fired into our National Space Science and Technology Center (NSSTC) building here at UAH over the weekend.

All bullets hit the 4th floor, which is where John Christy’s office is (my office is in another part of the building).

Given that this was Earth Day weekend, with a March for Science passing right past our building on Saturday afternoon, I think this is more than coincidence. When some people cannot argue facts, they resort to violence to get their way. It doesn’t matter that we don’t “deny global warming”; the fact we disagree with its seriousness and the level of human involvment in warming is enough to send some radicals into a tizzy.

Our street is fairly quiet, so I doubt the shots were fired during Saturday’s march here. It was probably late night Saturday or Sunday for the shooter to have a chance of being unnoticed.

Maybe the “March For Science” should have been called the “March To Silence”.

Campus and city police say they believe the shots were fired from a passing car, based upon the angle of entry into one of the offices. Shell casings were recovered outside.

This is a developing story. I have no other details.”

If indeed targeted, the level of violence aimed at shutting down scientific dissent and open debate reaches a whole dimension. Scientists with dissenting views on climate must now fear life-threatening hostility and psychological intimidation that up to now has been unprecendeted in the USA — a nation that has traditionally prided itself in its freedom of speech, open debate and alternative ideas.

Skeptics of alarmist scientists have long been the target of harsh rhetoric from hostile climate alarmist parties, who often refer to scientists such as Spencer and Christy as “climate deniers”, a thinly veiled reference to Holocaust deniers.

Harvard astrophysicist Prof. Willie Soon, also an otspoken critic of climate science alarmism, has also felt firsthand vicious attacks from both colleagues and militant alarmists. In an e-mail comment, he like Dr. Spencer also called the shots more more than just a “coincidence”, and characterized last weekend’s March for Science” demonstration as a political charade.

“The whole ‘March for Science’ movement during the weekend proves how ill climate science has become today,” Soon wrote. “This incidence of shooting into Professor John Christy’s and Dr. Roy Spencer’s office building is an act of violent intent and should be prosecuted to the fullest extent possible. Those anti-science cowards have not only lost their grounding in science, but clearly have also bankrupted their moral currency.”

Not long ago a University of Graz Professor called for the death penalty for scientists who did not agree with the visions of alarmist climate scientists, who have dominated the media and public scene with scare stories of super-storms and Biblical sea level rise for 15 years. While the professor’s harsh rhetoric was viewed as bizarre, it now totally pales compared to the 7 gunshots in Huntsville.

Joe Bast, spokesman of the U.S. think tank Heartland Institute in a comment by e-mail: “We should take this threat seriously, and all of us should take precautions in our professional and personal lives.”