As mentioned here yesterday, Germany saw sunny and very windy conditions last Sunday and the following national holiday Monday –leading to a huge power surge into the German power grid. But because many industries were closed during these two days, demand for electricity was low, see chart below: 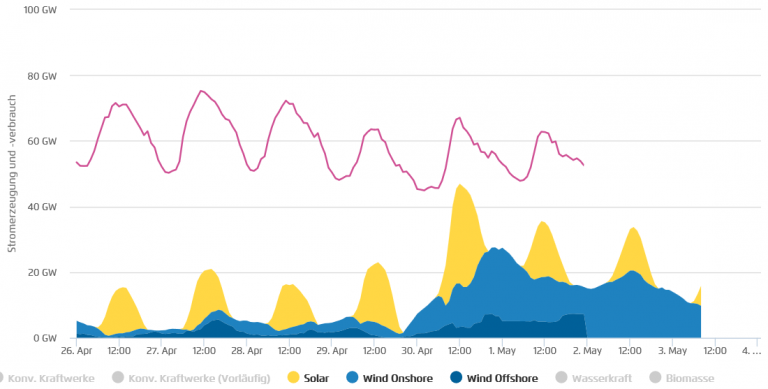 The chart above also shows both the very high infusion of solar, onshore and offshore wind into the German power grid on April 30th and early May, and the low overall demand.

The huge feed-in of wind and solar energy did not occur without problems, especially in the southern state of Bavaria, the German online BR24 reports here.

BR24 writes that for the first time ever in Bavaria “wind turbines had to be shut down on a large scale – because there was too much power in the grid,” this according to the Bundesverband Windenergie (Federal Association for Wind Energy). There was also criticism that the wind turbines were shut down instead of the state’s nuclear plants.

BR24 adds that “many wind turbines in Bavaria had to stop for hours because no one wanted to take the power” and that this was the first time this had ever happened in Bavaria.

According to the Fraunhofer Institute, “two thirds of Germany’s conventional power production was switched off” on Sunday in order to prevent the grid from turning into a giant toaster.

And because the base load (the grid’s backbone) cannot be adjusted rapidly or taken offline line to meet the rapid changes, the BR24 adds:

But the coal power plants continued to operate – despite the negative power prices of minus ten cents per kilowatt-hour.”

It’s not possible to turn off the coal plants because once you do, the critical baseload disappears and the grid risks becoming an uncontrollable wild bronco.

And when you are forced to sell your very own product at a negative price (minus ten cents per kilowatt-hour) just to get rid of it, then you get a pretty good idea of just how obscenely distorted the market has become because of wind and solar.

Yet the energy masterminds of Germany and Europe intend to double or even quadruple this folly in the future.

So what about the losses incurred from the negative prices? You guessed it! They will be passed along to the German consumers, who already pay among the highest electricity rates in the world.