Browse: Home / 2017 / July / 11 / Urban Farming Is Not A Planet Savior…More A Lifestyle For Modern Hypocrites And Ingrates

Urban farming seems to be one of the latest trends among activists obsessed with environmental-footprints, and is being billed by some as the solution for all the world’s ills.

In the following video urban farmer Curtis Stone is just the latest example of how people can get intoxicated by a dogma, become blind to their own hypocrisy, and be unable to even begin to grasp the complex socio-economic system we live in and rely on for our prosperity.

Of course there are a lot of positive points with what Stone preaches: short supply chains, fresh and nutritious produce and effective use of resources. But he makes the mistake of viewing his lifestyle as the world-saving religion that needs to be imposed onto everyone else. If only everyone became urban farmers like him, all the world’s ills would surely go away. The reality, however, is that nothing could be more naive. 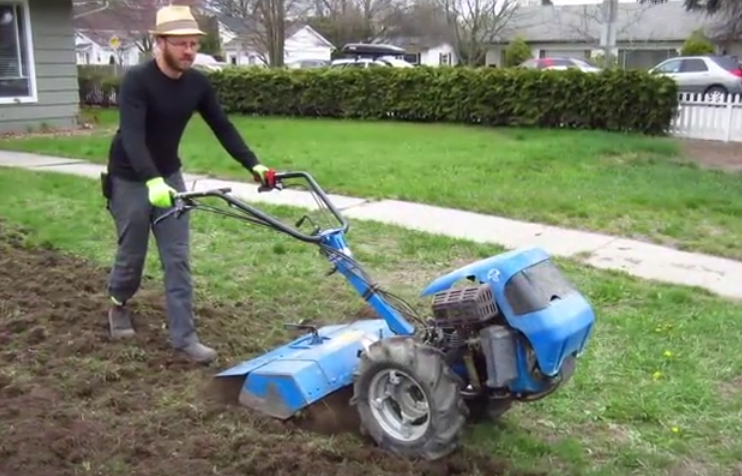 Like so many artsy-activist types, Curtis fails to realize that his current lifestyle is made possible only by the free-market, industrialized global system itself. In the video he says:

He then adds that we need to get away from the growth-based economy. His answer: “If we have things we can trade and we grow food and everybody is fed, that sounds like a good economy to me.”

Well, that just happens to be the free market economy, the very one he criticized just moments earlier. But Stone’s free-market version is one that resembles the Flintstones: scaled back with only limited small technology. It’s backwards, and it could never feed 8 billion people.

Stone’s problem is that he still does not have an inkling of how the modern economy works and where the very tools, equipment and technical foundation he (obliviously) relies on come from.

Note how early in the video he recommends a 2-stroke-engine-powered rototiller. He also uses hundreds of square yards of plastic film, made from fossil fuel petroleum, to protect the plants from nature. The bicycle he rides neither fell from the sky nor grew from a tree, but is one that was produced by today’s modern, free market industrial economy, with its parts coming from all over the world. He wears sweat-shop-made clothing and footwear, and not fig leaves and ferns. His spectacles are probably made using European-ground lenses and frames made from wire drawn in Mexico. Early in the video he talks about how his “business” is run and how to earn money. He doesn’t pack his fresh produce in a sack made of hide, rather in plastic commercial food bins. Stone also uses his PC notebook to make his presentations across the country.

His view of today’s global economy is as narrow as it is hypocritical.

he fails to realize that it is the growth-based economy that allowed humans to go from clubs and stone wheels to a foot-propelled bicycle and plastic vegetable tubs. And had it not been for the rampant human stupidity and dogma getting in the way over the eons, mankind would surely have reached bicycles and rototillers hundreds of years earlier.

If you want to convince anyone your philosophy is the real thing, then do what you are doing with nothing more than sticks and stones, and be successful at it. If you pull that off, then we’d believe you. Don’t preach like Al Gore does, and then hop on fossil-fuel powered private jets to spread your gospel. Travel to your speeches bare-footed, donning your best fig leaf. And never mind using a notebook and projector.

It’s wonderful Stone enjoys what he is doing and that many people appreciate all the fresh produce he grows and markets. Yes, some of his ideas are good and worth applause. Unfortunately, some people get a good idea and suddenly believe they are God’s Gift to mankind.

There are lots of other people out there doing good things; you’re not the only one. Stone, you need to climb down from your high horse and say thanks to those who made it possible for you, and not deplore them like a clueless ingrate jerk would do.