The massive scale of the cold is of Amazonian proportions, with temperatures well below normal across the entire continent. Bastardi even called the cold “spectacular”.

Recently snow was reported to have fallen in Santiago, Chile. According to the Washington Post here, “heavy, wet snow weighed down tree branches, which snapped power lines. Up to 350,000 homes lost power“. In some places 40 cm of snow blanketed the ground. The AP also reported

Chile’s Meteorological Office said it was the biggest snowfall in the capital in 46 years.”

For Santiago, it was the first snowfall the city had seen since 2011. What follows is the 7-day forecast anomaly for the Latin American continent. Cold is forecast to remain: 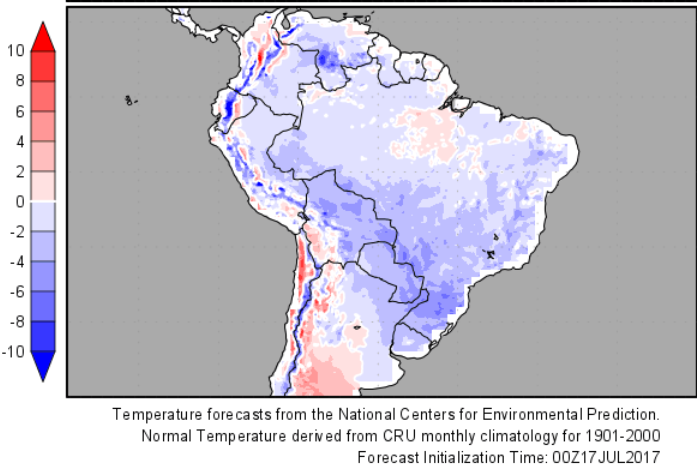 Things in the Arctic, at the opposite hemisphere, are not improving. Paul Homewood here writes DMI June sea ice data shows “a steady recovery in extent since the low in 2010” and that sea ice extent is where it was 11 years ago.

Climate alarmism’s “canary in the coal mine” Greenland also is behaving opposite of what global warming scientists predicted. It’s surface ice mass budget has been hovering at near record high levels.