Blaming 0.01% Of Atmosphere As Insane As Blaming 0.6% Of Human Race For World’s Ills

What follows later, below, is a short commentary by Prof. Fritz Vahrenholt and Dr. Sebastian Lüning recently appearing at Die kalte Sonne site here. Indeed, it’s truly mind-boggling how a single person or a trace gas now gets all the blame for every weather problem. The hysteria-filled Dark Ages of the Inquisition are back. 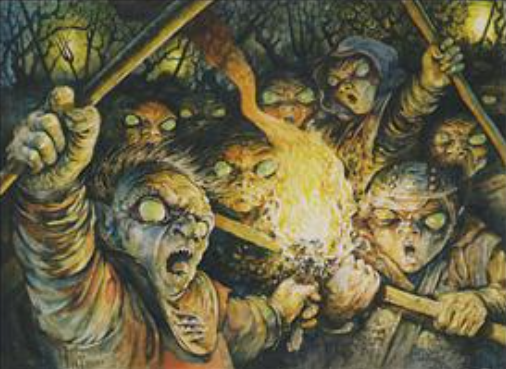 For example, The Mail here just reported how a team of scientists led by Professor James Hansen, NASA’s former climate science chief, even proposes a sort of final solution: immediately removing CO2 from our societies altogether, and then removing it from the atmosphere.

This is hysteria. Blaming 0.01% of the atmosphere (CO2) for bad weather is truly as insane as blaming all the world’s problems on 0.6% of the population (Jews) in the 1930s.

As a whole climate is a highly complex system involving almost countless variables. Singling out just one of these (a tiny one) and blaming all weather ills on it is an intellectual and scientific folly of breathtaking proportions.

Atmospheric CO2 concentrations are in fact at a geologically-historically puny 400 parts per million (and 100 parts per million of that may be attributed to man, i.e. 0.01% of the atmosphere). Historically the earth still finds itself at the very low end in terms of CO2 in the atmosphere. An honest look at the entire body of science shows us that CO2 is in fact a bit player at best, and at the current juncture catastrophic manmade warming science is entering the realms of mass fraud.

What follows is Vahrenholt’s and Lüning’s report in English. I’m glad to see that there are at least two German scientists (there are in fact others) who opted to stay off the loon bandwagon and want nothing to do with all the madness.
=============================

In the “Blog der Republik” on June 9, 2017, the current drought in South Africa, no time was wasted with connecting it to climate change. No question about it, Trump is to blame for the water shortage!

Even that US-President Trump denies climate change, Capetown is suffering under dramatic drought.
The South African metropolis of Capetown is suffering from one of the worst drought in 113 years. Drastic emergency rules will force water saving. To do this drastically increased prices and much communication work will contribute to the effort. Just a drop in the bucket and too late? Even though the drama had been foreseen years ago, policymakers relied solely on winter rains – which have not appeared once again. Now the citizens and economy are suffering […] And even as US President Donald Trump denies climate change, in South Africa the consequences cannot be ignored.”

It never ceases to amaze how little the commentators know about the history of the climate. Because of this historical nearsightedness, they construct adventurous interrelationships. Indeed the first question to be asked is whether winter rains had always been steady, or if there have been variations in the past. If the rain fluctuated, what was the driving mechanism behind it? Once again that brings us to our Project on Medieval Climate Anomalies, which records historic precipitation changes in addition to the temperature changes. One click on the project map is all it takes to identify the studies on winter rains of Capetown.

Studies of the offshore sediment boring GeoB 8323 as well in Lake Verlorenvlei, Princessvlei Lake and Katbakkies Pass show that winter rains were reduced over 200 years, 1000 years ago. These are the yellow-colored dots on the map (as well as a nearby red point). When you click on the dots, you can even open the most important diagrams that show the documented historical fluctuations in winter rain.