WUWT “One Of The Most Radical Climate-Denier Blogs” …Their Purpose: “Permanently Produce Fake News”

Here’s a good example of how climate alarmists and leftists in Germany react when confronted with different opinions or the truth. It just illustrates the brand of radicalism we’re up against.

Supposedly the Trump Administration was suppressing the “leaked” report and fighting to keep it out of the public’s view. And now that it was out, the Trump government found itself “under pressure”.

Then a couple of days later, it emerged in the US media that the report had in truth not been kept away from public view after all, and that the New York Times really hadn’t broken any “explosive” story. The report had in fact long been available to anyone for months.

The New York Times even had to issue a humiliating correction and clarification for the “large screw-up“.

On  August 11, reader Reinhard Lange left a comment at Klimaretter pointing out that their story was faulty and needed to be urgently corrected. Lange provided a link to WUWT for Klimaretter, so that they could get the details. 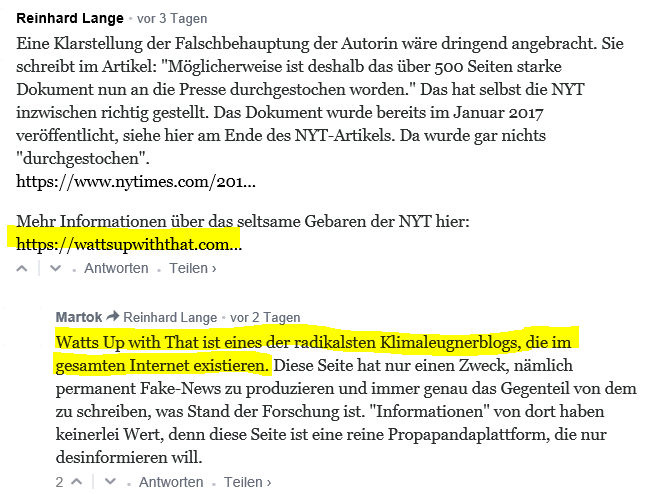 The blunder of course was highly embarrassing for the extremely devout Klimaretter site, and one of their attack dogs, reader Martok, immediately responded (above):

Watts Up with That is one of the most radical climate-denier blogs that exists in the entire Internet. This site has only one purpose, namely to permanently produce fake news and to write exactly the opposite of what the latest research tells us. ‘Information’ from there has no value whatsoever because this site is a pure propaganda platform that only wishes to spread disinformation.”

Undeterred, Lange persisted, first wondering why such an aggressive attitude on the part of Martok, and then pointed out to Klimaretter that the report draft had long since been available, and that even the NYT itself issued a (half-hearted) correction.

Next Klimaretter lapdog Regim responded next, insisting that the US government never officially released the report, and then accused Lange of copying from the WUWT “climate denier blog”. She demanded of Lange:

Why wasn’t the report published on a government site and presented to the public? Why was only a draft published?

A disbelieving Lange in turn replied, “Are you really that clueless?“, and then explained where to find the report and that there was nothing unusual with anything.

Not good enough. Regim demanded an address to the government site containing the draft report.

So Lange instructed her to try using a tool called “a search engine”. Again Regim demanded a direct address: 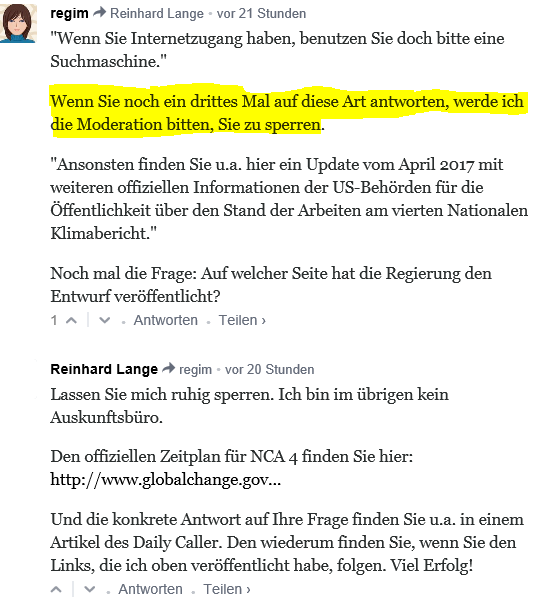 and warned (marked yellow) above:

If you again answer in this way for a third time, then I’m going to ask Moderation to ban you.”

Lange replied that they should feel free to ban him, and again told her where to get the information on the story, adding that details could be found among other places at an article by the Daily Caller before wishing her luck.

Still not good enough for Regim. The Daily Caller too is a “right-extremist” paper, she insisted.

By now Klimaretter’s embarrassment was becoming full-scale humiliation, as it was clear that the original NYT article was seriously flawed.

At this point a normal outlet would have long since issued a correction. But not Klimaretter. Rather than thanking Lange for pointing out the story’s major flaw, correcting it and apologizing, Klimaretter banned Lange:

That’s the reward one gets in Germany for bringing out the truth – you get banned because insisting on the truth that demolishes the narrative is “trolling”. As far as I know, Klimaretter continues to stand by its story, even though the NYT issued a correction.

Is it possible to engage in a discussion with the likes of Klimaretter? Obviously the answer is no. An open discussion is the last thing they seek. What they want is a discussion shut-down.

In case Klimaretter may still be interested, they can refer to the Washington Post here. Yes, the NYT piece was crap. Time to stop hiding.

Thanks, Reinhard Lange. You exposed how these people really work.

60 responses to “WUWT “One Of The Most Radical Climate-Denier Blogs” …Their Purpose: “Permanently Produce Fake News””