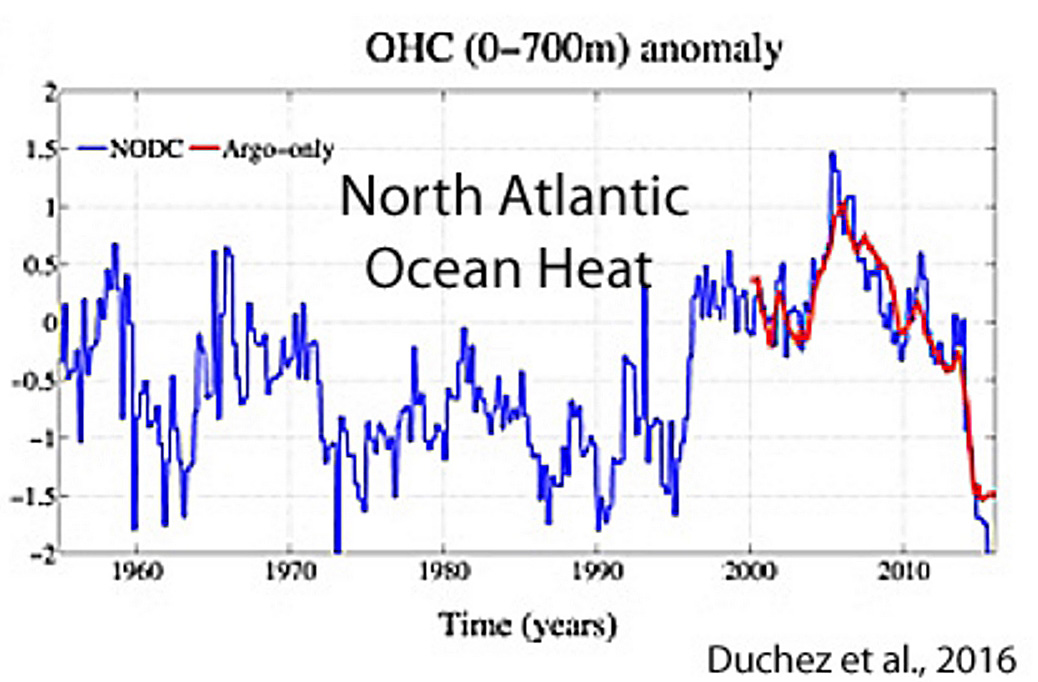 Contrary to expectations, climate scientists continue to report that large regions of the Earth have not been warming in recent decades.

According to Dieng et al. (2017), for example, the global oceans underwent a slowdown, a pause, or even a slight cooling trend during 2003 to 2013.  This  undermines expectations from climate models which presume the increase in radiative forcing from human CO2 emissions should substantially increase ocean temperatures.

The authors indicate that the recent trends in ocean temperatures “may just reflect a 60-year natural cycle“, the AMO (Atlantic Multidecadal Oscillation), and not follow radiative forcing trends.

Dieng et al., 2017    We investigate the global mean and regional change of sea surface and land surface temperature over 2003–2013, using a large number of different data sets, and compare with changes observed over the past few decades (starting in 1950). … While confirming cooling of eastern tropical Pacific during the last decade as reported in several recent studies, our results show that the reduced rate of change of the 2003–2013 time span is a global phenomenon. GMST short-term trends since 1950 computed over successive 11-year windows with 1-year overlap show important decadal variability that highly correlates with 11-year trends of the Atlantic Multidecadal Oscillation index. The GMST 11-year trend distribution is well fitted by a Gaussian function, confirming an unforced origin related to internal climate variability. 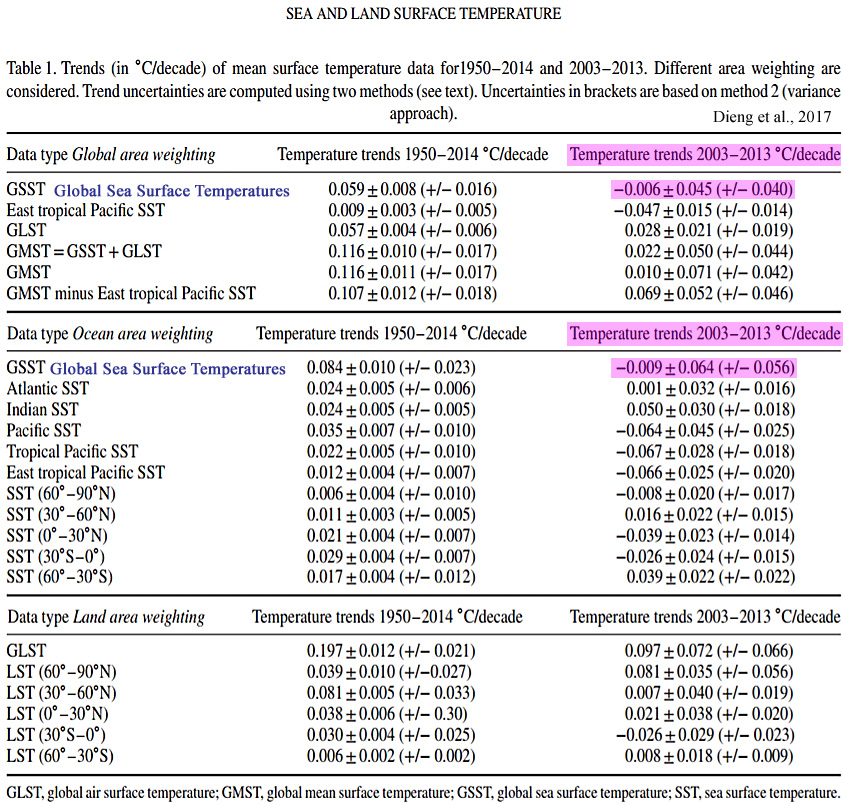 We evaluate the time derivative of full-depth ocean heat content to determine the planetary energy imbalance with different approaches: in situ measurements, ocean reanalysis and global sea level budget.  For 2003–2013, it amounts to 0.5 +/− 0.1 W m−2, 0.68 +/− 0.1 W m−2 and 0.65 +/− 0.1 W m−2, respectively for the three approaches.    Although the uncertainty is quite large because of considerable errors in the climate sensitivity parameter, we find no evidence of decrease in net radiative forcing in the recent years, but rather an increase compared to the previous decades.

We can note that the correlation between GMST [global mean surface temperature] trends and AMO trends is quite high. It amounts 0.88 over the whole time span. At the beginning of the record, the correlation with PDO trends is also high (equal to 0.8) but breaks down after the mid-1980s.  The GMST and AMO trends shown in Figure 6 show a low in the 1960s and high in the 1990s, suggestive of a 60-year oscillation, as reported for the global mean sea level by Chambers et al. (2012). Thus the observed temporal evolution of the GMST [global mean surface temperature] trends may just reflect a 60-year natural cycle driven by the AMO. 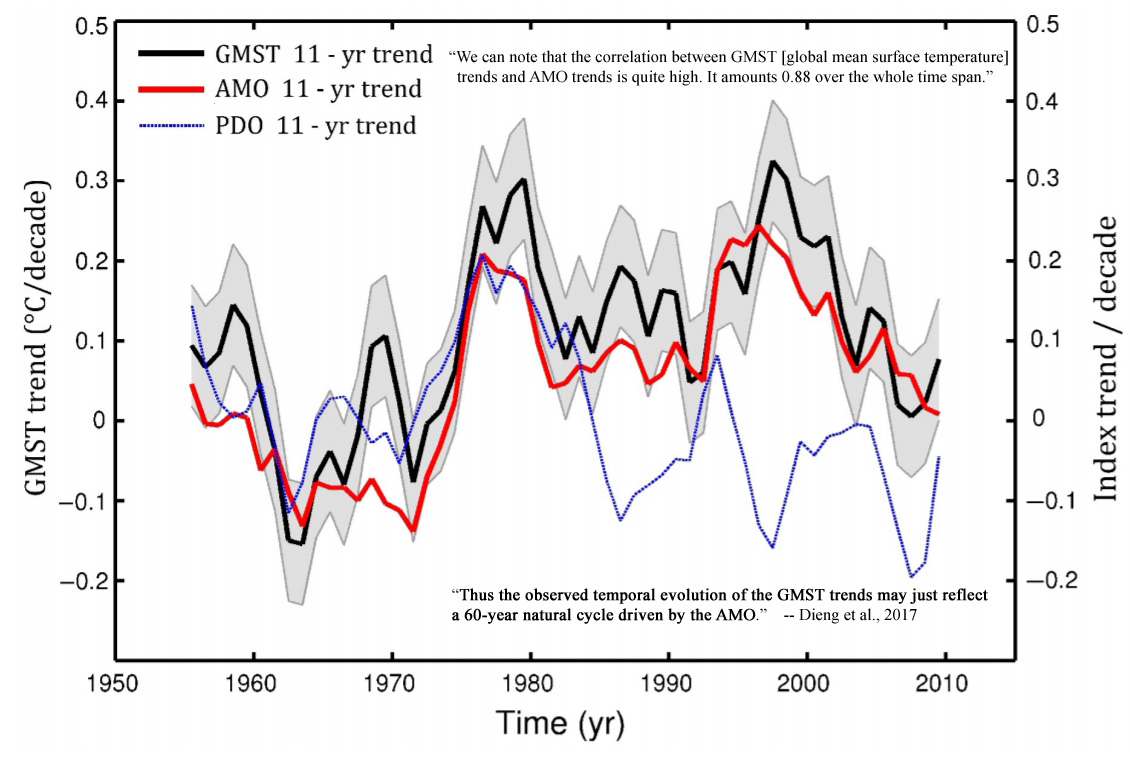 According to Piecuch et al. (2017) there has been no net warming of the North Atlantic Ocean in the last quarter century.  The warming that occurred in the 10 years from 1994-2004 has been completely negated by an even more pronounced cooling trend since 2005.   The predominant (87%) cause of the warming was determined to be of the same natural (non-anthropogenic) origin as the subsequent cooling: advection, the movement/circulation of heat via internal processes.   In fact, human CO2 emissions are never mentioned as even contributing to the the 1994-2004 warming.

Piecuch et al., 2017    The subpolar North Atlantic (SPNA) is subject to strong decadal variability, with implications for surface climate and its predictability. In 2004–2005, SPNA decadal upper ocean and sea-surface temperature trends reversed from warming during 1994–2004 to cooling over 2005–2015. … Over the last two decades, the SPNA has undergone a pronounced climate shift. Decadal OHC and SST trends reversed sign around 2004–2005, with a strong warming seen during 1994–2004 and marked cooling observed over 2005–2015. These trend reversals were pronounced (> 0.1 °C yr−1 in magnitude) in the northeastern North Atlantic (south and west of Iceland) and in the Labrador Sea. … To identify basic processes controlling SPNA thermal variations, we diagnose the SPNA heat budget using ECCOv4. Changes in the heat content of an oceanic control volume can be caused by convergences and divergences of advective, diffusive, and surface heat fluxes within the control volume.  [Advective heat convergence] explains 87% of the total [ocean heat content] variance, the former [warming] showing similar decadal behavior to the latter [cooling], increasing over 1994–2004, and decreasing over 2005–2015. … These results demonstrate that the recent SPNA decadal trend reversal was mostly owing to advective convergences by ocean circulation … decadal variability during 1993–2015 is in largest part related to advection by horizontal gyres.

Yeager and Robson (2017) also point out that, like it did from the 1960s to 1980s, the North Atlantic “has again been cooling”, a trend which they and others expect to continue.   Sea surface temperatures are no warmer today than they were in the 1950s.

Yeager and Robson, 2017    [W]hile the late twentieth century Atlantic was dominated by NAO-driven THC [thermohaline circulation] variability, other mechanisms may dominate in other time periods. … More recently, the SPNA [sub polar North Atlantic] upper ocean has again been cooling, which is also thought to be related to a slowdown in the THC. A continued near-term cooling of the SPNA has been forecast by a number of prediction systems, with implications for pan-Atlantic climate.

The Southern Ocean Has Been Cooling Since The 1970s, Contrary To Models

Latif et al., 2017    The Southern Ocean featured some remarkable changes during the recent decades. For example, large parts of the Southern Ocean, despite rapidly rising atmospheric greenhouse gas concentrations, depicted a surface cooling since the 1970s, whereas most of the planet has warmed considerably. In contrast, climate models generally simulate Southern Ocean surface warming when driven with observed historical radiative forcing. The mechanisms behind the surface cooling and other prominent changes in the Southern Ocean sector climate during the recent decades, such as expanding sea ice extent, abyssal warming, and CO2 uptake, are still under debate. Observational coverage is sparse, and records are short but rapidly growing, making the Southern Ocean climate system one of the least explored. It is thus difficult to separate current trends from underlying decadal to centennial scale variability.

Turney et al., 2017    Occupying about 14% of the world’s surface, the Southern Ocean plays a fundamental role in ocean and atmosphere circulation, carbon cycling and Antarctic ice-sheet dynamics. … As a result of anomalies in the overlying wind, the surrounding waters are strongly influenced by variations in northward Ekman transport of cold fresh subantarctic surface water and anomalous fluxes of sensible and latent heat at the atmosphere–ocean interface. This has produced a cooling trend since 1979. 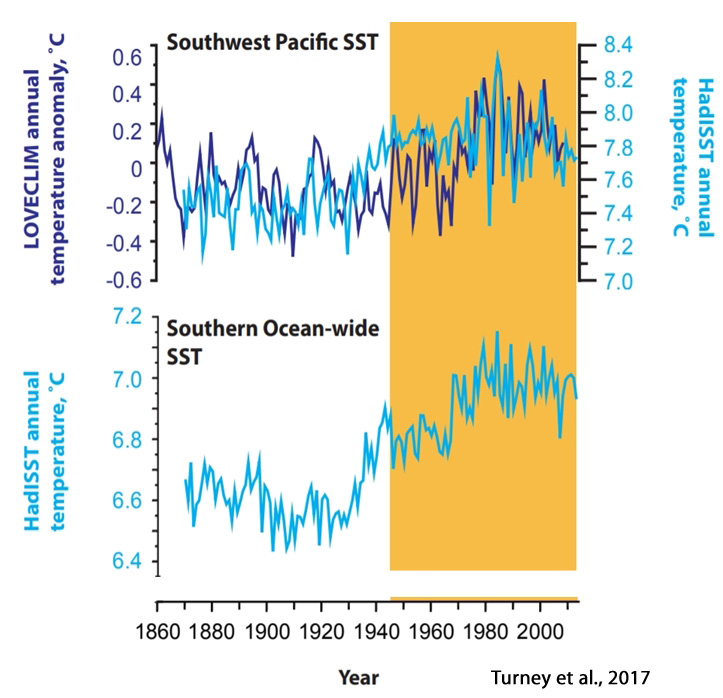 Comiso et al., 2017    The Antarctic sea ice extent has been slowly increasing contrary to expected trends due to global warming and results from coupled climate models. After a record high extent in 2012 the extent was even higher in 2014 when the magnitude exceeded 20 × 106 km2 for the first time during the satellite era. … [T]he trend in sea ice cover is strongly influenced by the trend in surface temperature [cooling]. … A case study comparing the record high in 2014 with a relatively low ice extent in 2015 also shows strong sensitivity to changes in surface temperature. The results suggest that the positive trend is a consequence of the spatial variability of global trends in surface temperature and that the ability of current climate models to forecast sea ice trend can be improved through better performance in reproducing observed surface temperatures in the Antarctic region. 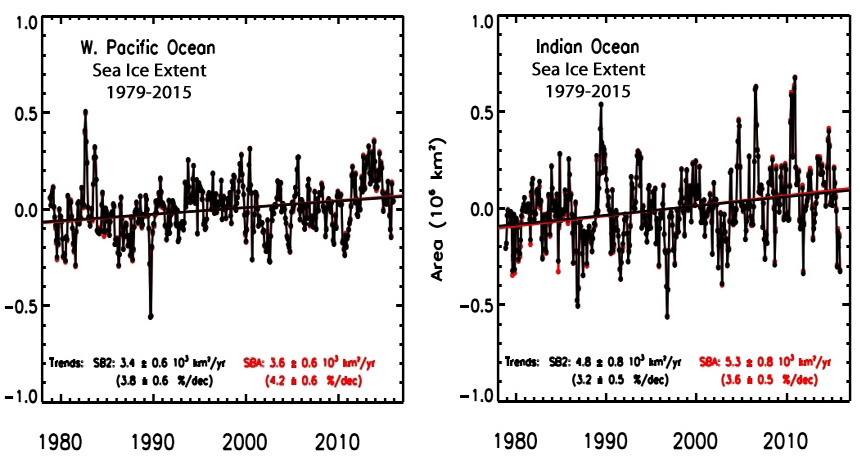 The Pacific Ocean Has Also Been Cooling Since The 1970s

Li, 2017    In the Southern Ocean, the increasing trend of the total OHC slowed down and started to decrease from 1980, and it started to increase again after 1995. In the warming context over the whole period [1970-2009], the Pacific was losing heat, especially in the deep water below 1000 m and in the upper layer above 300 m, excluding the surface 20 m layer in which the OHC kept increasing through the time. 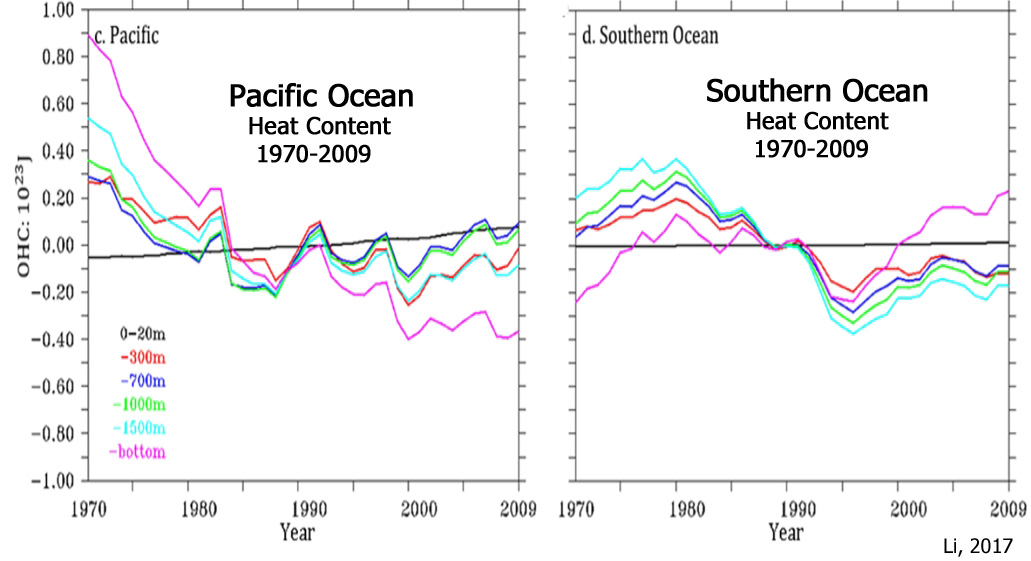 Goel et al., 2017    Ice rises are a useful resource to investigate evolution and past climate of the DML coastal region. We investigate Blåskimen Island ice rise, one of the larger isle-type ice rises at the calving front of the intersection of Fimbul and Jelbart Ice Shelves, using geophysical methods. … Using the Input-Output method for a range of parameters and column setups, we conclude that Blåskimen Island has been thickening over the past nine years [2005-2014]. Thickening rates cannot be determined precisely, but ensemble results show that thickening rate averaged over the ice rise varies between 0.07 m a−1 and 0.35 m a−1 [per year]. On longer timescales, we speculate that  the summit of Blåskimen Island has been stable within several kilometers at least in the past ∼600 years but no longer than several millennia.

Bader et al., 2017    Rather than reflecting major changes in ice flow path over time, the provenance changes are interpreted to indicate relative stability of the East Antarctic ice sheet.

Martín-Español et al., 2017    We investigate the mass balance of East Antarctica for 2003–2013 using a Bayesian statistical framework. … We apportion mass trends to SMB and ice dynamics for the EAIS, based on two different assumptions, different remote sensing data and two RCMs. In the first experiment, the model apportions about a third of the mass trend to ice dynamics, +17 Gt/yr, and two thirds, +40 Gt yr−1 to SMB, resulting in a total mass trend for the EAIS [East Antarctic Ice Sheet] of +57 ± 20 Gt yr−1. 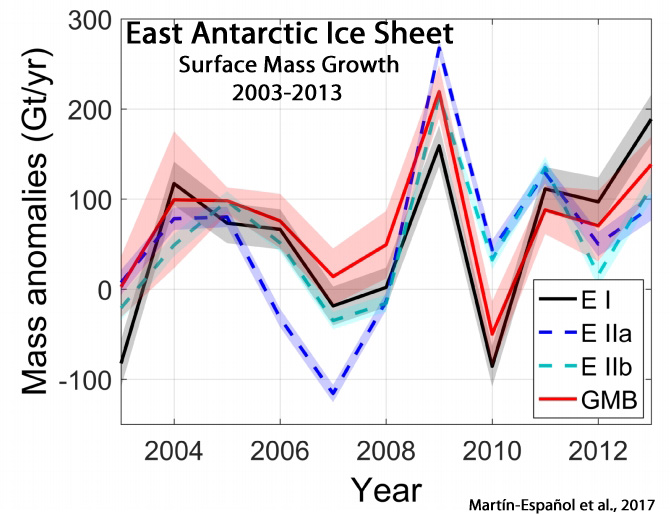 Bolch et al., 2017    Previous geodetic estimates of mass changes in the Karakoram revealed balanced budgets or a possible slight mass gain since ∼ 2000. Indications of longer-term stability exist but only very few mass budget analyses are available before 2000. Here, based on 1973 Hexagon KH-9, ∼ 2009 ASTER and the SRTM DTM, we show that glaciers in the Hunza River basin (central Karakoram) were on average in balance or showed slight insignificant mass loss within the period ∼ 1973–2009.

Årthun et al., 2017    Statistical regression models show that a significant part of northern climate variability thus can be skillfully predicted up to a decade in advance based on the state of the ocean. Particularly, we predict that Norwegian air temperature will decrease over the coming years, although staying above the long-term (1981–2010) average. Winter Arctic sea ice extent will remain low but with a general increase towards 2020.

Pittard et al., 2017    We suggest the Lambert-Amery glacial system will remain stable, or gain ice mass and mitigate a portion of potential future sea level rise over the next 500 years, with a range of +3.6 to -117.5 mm GMSL-equivalent.