If Florida’s transportation were based mostly on electric vehicles, as activists demand, it would quickly come to a standstill in times of hurricanes and mass evacuations. Charging stations would be overwhelmed and millions of lives put at risk. 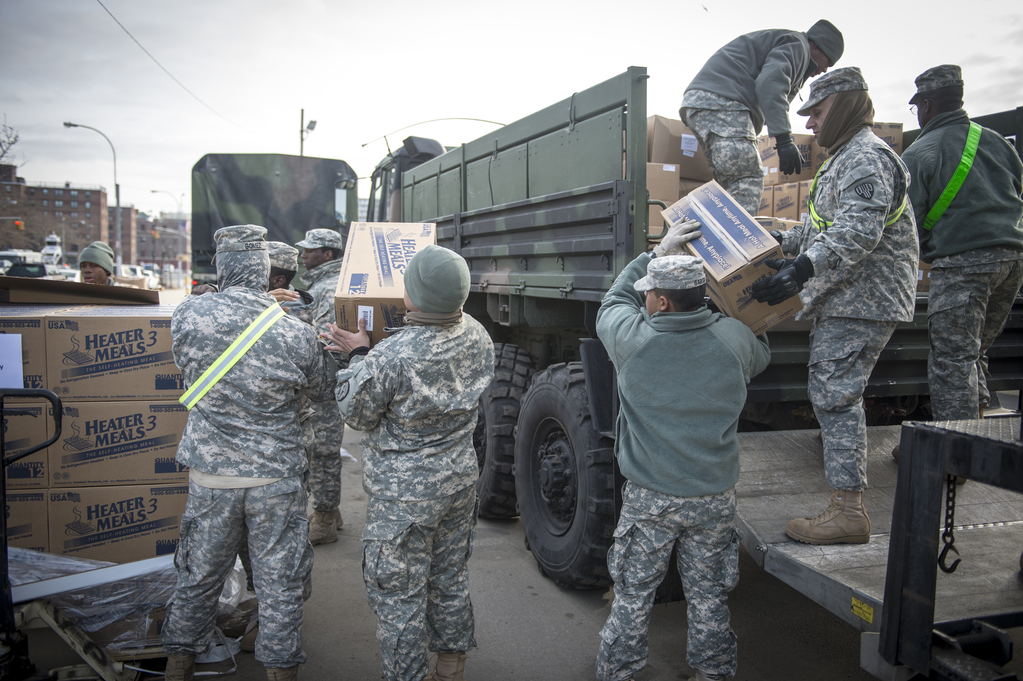 Good thing we have fossil fuel powered vehicles, which can run and be refueled whenever the power is out. Army National Guard load trucks as they prepare to hand out supplies to people in need. E-vehicles would sit idle and leave millions abandoned and at risk. (U.S. Navy photo from FEMA site, by Chief Mass Communication Specialist Ryan J. Courtade/Released)

E-mobility in times of hurricane would be “a nightmare”

Yesterday Michael Limburg of the Germany-based European Institute for Climate and Energy (EIKE) here posted a brainstorming thought exercise, posing the question of what would the evacuation of Florida look like if most of the cars were electric?

And to take it a step further, what would rescue services today be like if they depended on electric vehicles?

EIKE concludes that it would be “a nightmare!”

EIKE cites a post by IT expert Hadmut Danisch here, who drove the point home, saying the outcome would be “mass death on the highways“. Though the discussion rages over the degree to which man may be at fault for hurricanes like Irma, one thing is sure: as long as it’s September, the Atlantic and the Gulf of Mexico will always be in peak hurricane season with or without man. Powerful hurricanes have always been the case, and always will be.

What has emerged, Limburg writes, is: the better the early warning system is, and the more mobile people are, the less victims you are going to see.

Cars would lose their charge, millions stranded on highway

Imagine if the environmentalists had had their way and had managed to force the US into electric cars…something that is underway now in some countries like Norway, the UK and soon France. Germany recently has been discussing in earnest banning by 2030 the internal combustion engine.

And now imagine with Irma approaching if the millions of citizens evacuating populated south Florida had had electric cars instead to make the 400-mile journey to get out of harm’s way. After 100 miles or so these cars would have lost their power, and charging stations quickly would have become overrun with cars waiting to make the one-hour charge-up.

Traffic would have rapidly come to a halt.

These millions of stranded people then would have been sitting ducks waiting to be blown away by nature’s fury.

With fossil fuels, the car’s range is far greater, fueling time is just minutes and extra canisters of fuel also can be easily brought along. Power outages would not interrupt petrol stations because the gas pumps can be easily powered by portable fossil fuel-powered generators.

But with electric cars it would be a totally different story. If a hurricane hit, power lines would go down, knock out the power grid and thus would make the charging of electric vehicles impossible. Solar panels would fly off buildings as roofs are torn off. Wind parks would automatically turn off because they are not designed to operate in hurricane force winds. Many wind towers would simply buckle in the 250 km/hr wind gusts, meaning the green power supply infrastructure would of course get destroyed. In summary, solar panels and offshore wind parks in the Caribbean and Gulf of Mexico make about as much sense as raising sheep on a wolf-farm.

And after the hurricane passes, electric cars would remain immobile because the power grid would be knocked out. Recharging vehicles would be impossible. Emergency vehicles also would quickly lose their power charge and sit idle. Recovery and clean up efforts would take months, if not years. The toll on human life would be unimaginable.

This is the future of electric mobility.

Today, thanks to fossil fuels, energy is always portable, available and reliable. Fossil fueled vehicles are able to travel great distances, be onsite within a minutes notice, and be refueled quickly. Nuclear and coal power plants stand their ground, and so restoring power is easy.

Floridians have shown that even in the aftermath of the most destructive storms, recovery and a speedy return to business is a matter of days or a few weeks, all thanks to the always dependable and available fossil fuels.

49 responses to “German Analysis: Florida Evacuation With E-Vehicles Would Mean “Mass Death On The Highways””