UPDATE 3: But NOAA keeps moving track further out to sea…

UPDATE 2: Joe Bastardi says Maria not hitting US “not a done deal”.

A few days ago it looked as if the US coast could be hit by two large hurricanes: New England by Jose, and later the Southeast by Maria. Global warming activists and the haters of our modern industrial society were salivating.

For example on September 17, the Washington Post presented one model with Maria barreling straight into North Carolina.

After all, imagine all the wonderful media headlines proclaiming “unprecedented destruction and hurricane forces“. It would be a wonderful field day. With such destruction, how could Denier in Chief President Donald Trump possibly be able to dispute that man is the cause? The witch hunt for and purge of deniers could begin in earnest.

Yet, reality shows us that hurricanes have always been just as violent and occurred just as often in the past, if not more often. For example, Ryan Maue here reminds us of the fury of 1933 season:

In that year, Maue tweeted, saw 15 of 20 storms hitting land “with 6 majors and 2 Cat 5’s“. Imagine if that were to happen today. This type of destruction is precisely what the global warming ambulance chasing media and fake scientists are hoping for today. so it is only natural that some days ago Jose and Maria showed signs those glory days maybe returning – possibly the chance of two hurricanes hitting the US at once!

But now the most recent computer models show that Jose is in its death throes, stuck off the coast of New England, crumbling and no longer posing any serious danger. At Twitter the outstanding wxcharts here shows the latest tracks for Maria and Jose: 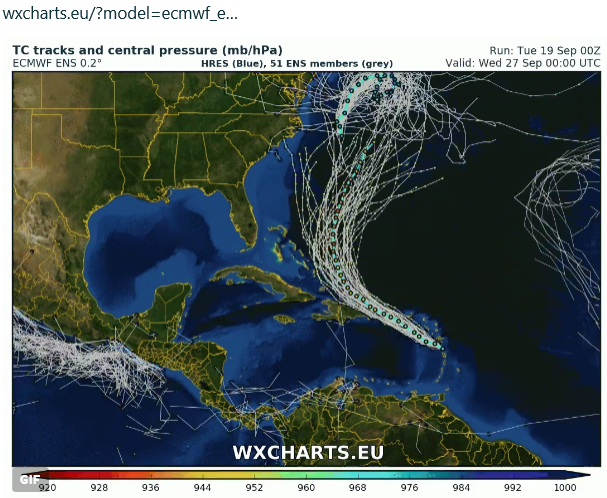 A storm that protects us?

At the top of the graphic above we see the remnants of Jose. Ironically hurricane Jose, which alarmists had hoped would smash violently into the Northeast, is turning out to be a possible savior in that it could play a key role in deflecting powerful Maria away from land. Just imagine: A global warming produced hurricanes that protect us!

As the chart above shows, Maria is projected to head out to sea, thus allowing us to be more hopeful. Yet it is still too early call off the alarms. There’s still some chance that Maria could veer off the model projected course and make landfall. Readers living on the East Coast must remain vigilant. Thankfully, most computation see the storm tracking out to sea.

Today at his Daily Update, Joe Bastardi cautions us and points out that Maria still has a considerable window to make landfall around North Carolina. Hurricane forecasts beyond 5 days Harbour tremendous uncertainty.

NOAA also has Maria headed out to sea with its latest cone: 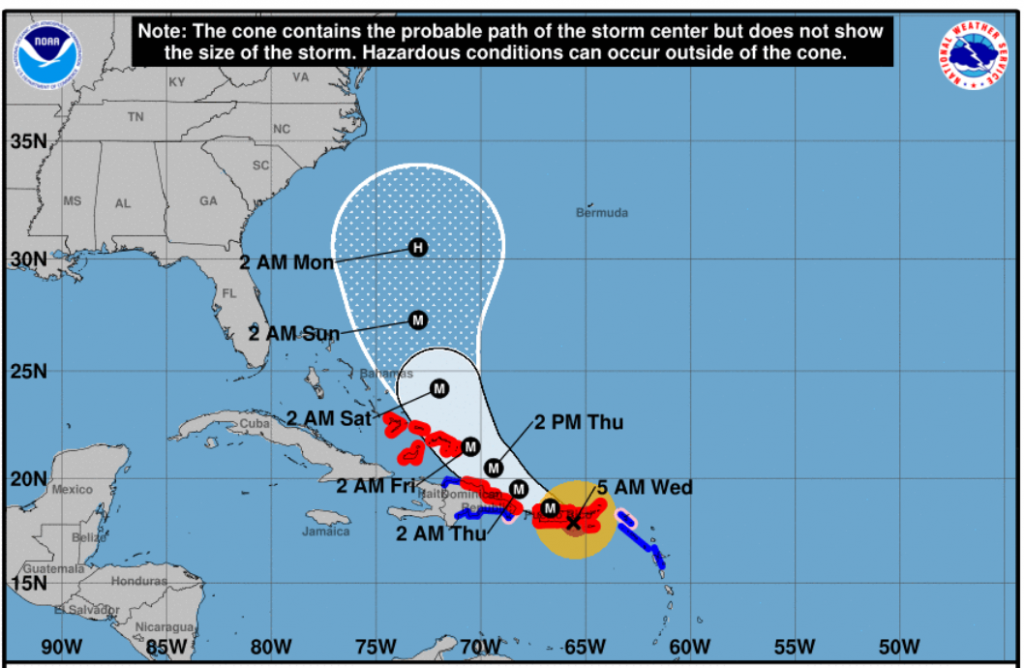 Maria projected to head out to sea. Source: NOAA.

The profiteers of bad news

The media and climate ambulance chasers of course will deny that they are becoming disappointed by the latest tracks, and that people couldn’t be so mean as to wish deadly storms to strike land. But it’s not so. Much of the mainstream media are terrible people who are agenda-driven. They deceive their readers and try to manipulate public perception with fear. They make their livings with bad news. Bad news for them is good news. How often do you ever see them write about good news? How often do we see them present things on their bright side? They’re just nasty people.

But there is some good news out there for the media, climate ambulance chasers and mass destruction fantasists: the hurricane season still has a long way to go, and so they can hope for new hurricanes. It still remains an ideal year for hurricanes.