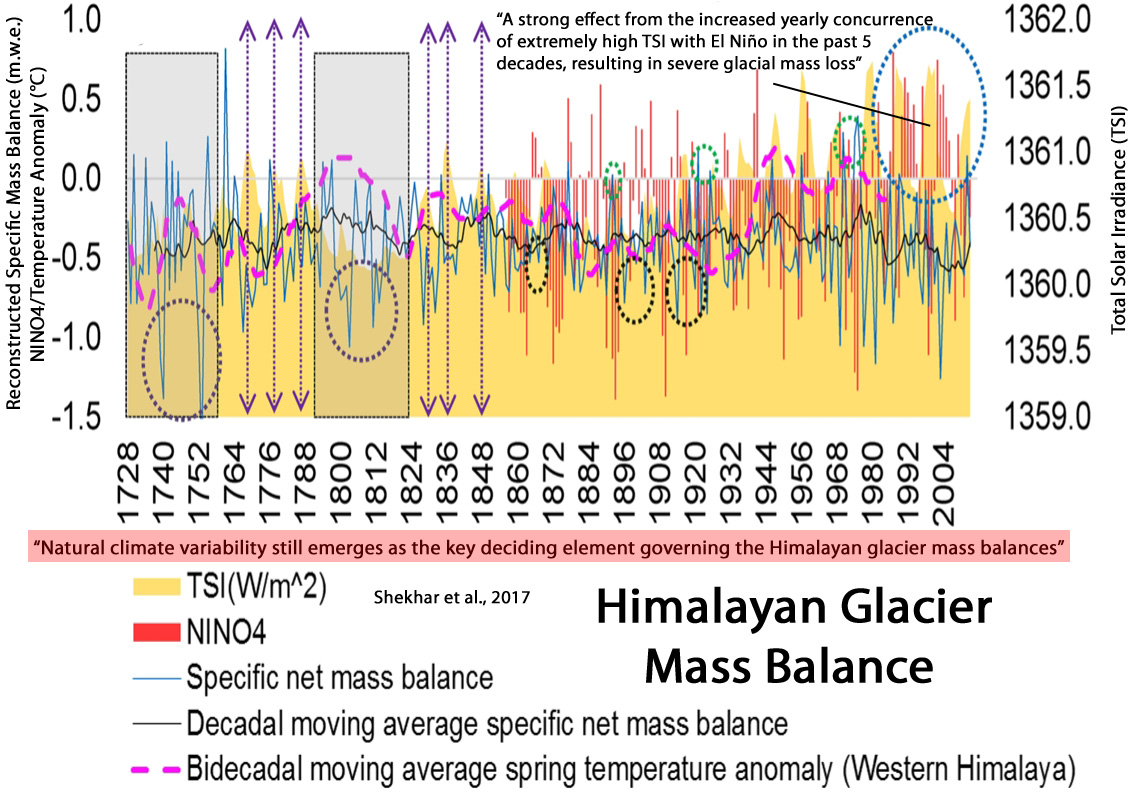 Yet another new paper has challenged to IPCC-endorsed conclusion that the Himalayan glaciers are melting rapidly due to anthropogenic climate change, and that these glaciers will very likely “disappear” by 2035. 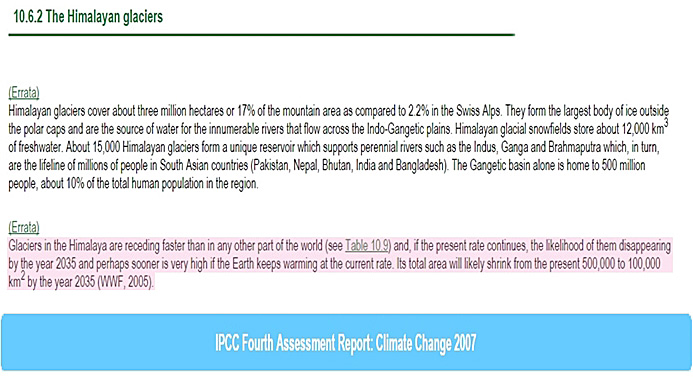 The claim that the Himalayan glaciers would disappear by 2035 was included in the 4th IPCC report (2007) not for scientific reasons, but to put political pressure on world leaders.

However, a 2014 comprehensive analysis of over 2,000 glaciers in the region indicated that 88% of Himalayan glaciers are stable or advancing, with overall negligible change (0.2%) since 2000.

Prior to this apparent 21st century “pause” in Himalayan glacier melt, a substantial glacier retreat occurred between the 1970s and 1990s for the region.   There were also decadal-scale periods of severe glacier melt during the 1600s and 1700s (Little Ice Age), when atmospheric CO2 levels were significantly lower (~275 ppm) than they are now.  The amplitude of the glacier retreat during the 17th and 18th centuries sometimes even exceeded the melt rates achieved during the last few decades (Shekhar et al., 2017).

The authors conclude that there is a “robust natural climatic control over the Himalayan glaciers“, even for recent decades.  This conclusion contradicts the IPCC’s contention that Himalayan glacier melt is controlled by human activity.

The Himalayan glaciers will not be “disappearing” by 2035.

Half  Of The World’s Non-Polar Glaciers (Himalayas) Were Already Melting During 1600s, 1700s

[T]he Hindu Kush-Himalaya (HKH) harbors ~50% (by area) of all the glaciers outside of the polar regions. … Our research is the maiden attempt to reconstruct the longest regional scale glacier mass balance records for the Western Himalaya based on tree-ring sampling at an unprecedented scale. Another highlight of our study is that it presents valid evidence of the significant mass loss experienced by the Himalayan glaciers even during the LIA [1500-1850].

[W]e believe that the episodes of significantly negative mass balances … were the result of an enhanced El Niño affecting the ISM [Indian Summer Monsoon] and increasing the temperatures … [and] a more direct relationship between the high TSI and more negative mass balances during the LIA in the years with potentially weaker El Niño. 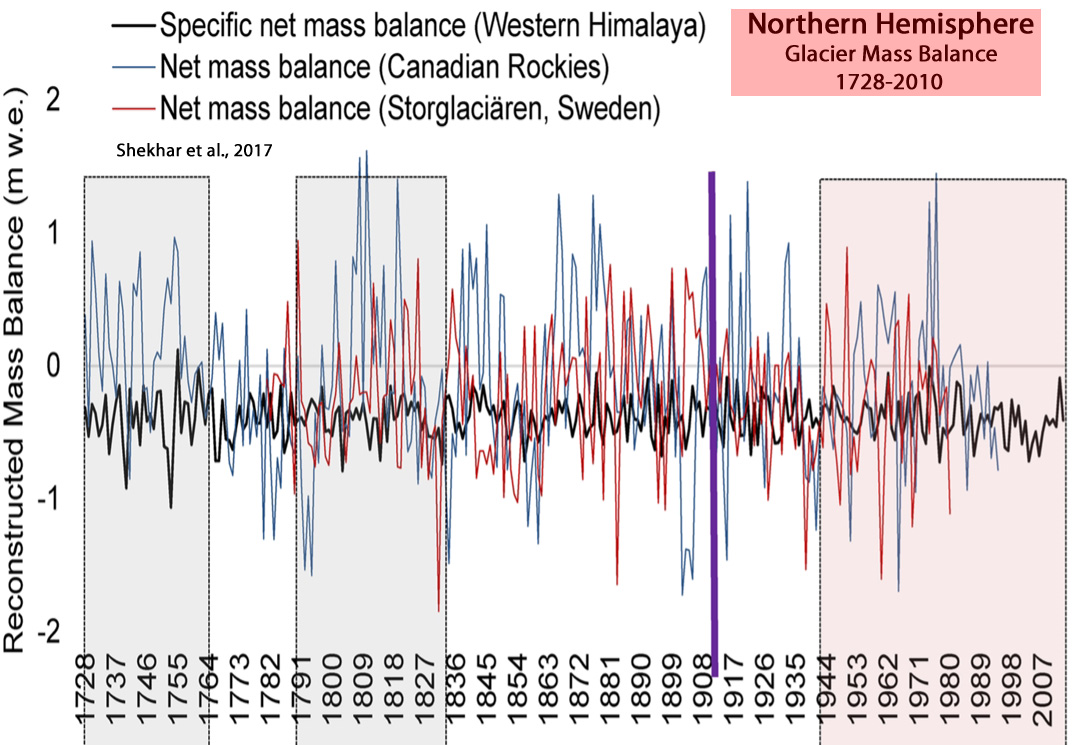 In the case of the Himalaya, the […] phase of rising regional temperatures, and the start of the strong solar cycles that in later years (since the 1970s), started showing substantial coupling with strong El Niño episodes.  [M]ass balance periodicities of 9–12 years during ~1970–1990 [are] a representation of the response to a few of the strongest consecutive solar cycles in past 400 years. In fact, we see that ~50% of the years since 1970 experienced an exceptionally high TSI of >1361 W m−2, ~40% of which also underwent warm phases of ENSO.

Although, the study acknowledges the contributions of anthropogenic drivers of climate change in the Himalayan region, it also highlights a strong effect from the increased yearly concurrence of extremely high TSI with El Niño in the past five decades, resulting in severe glacial mass loss.

Although external anthropogenic forcing can partly control the glacial regime in the Himalaya, the natural climate variability still emerges as the key deciding element governing the Himalayan glacier mass balances. Similar to several other studies for the region, our study also identifies ENSO, NAO, and AMO as the primary drivers of the regional mass balance variability. The fact that the past few decades have experienced intensified episodes of NAO, closely correlating with rising temperature, also suggests a robust natural climatic control over the Himalayan glaciers. 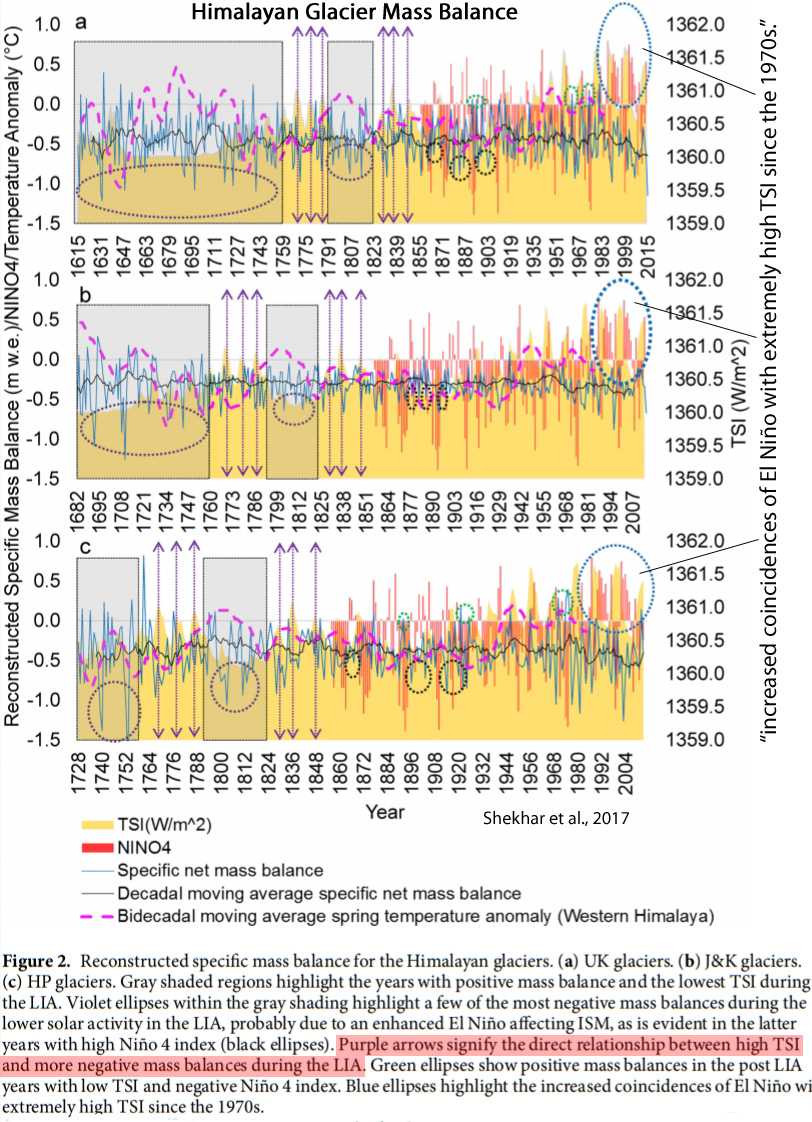