I use the word “surprise” here because the massive German public media system are generally devout warmists and vigilant gatekeepers against skeptic views. Open discussion here means discussion only among adherents and the like-minded. Anyone with a dissident view usually is branded and excluded.

Before telling viewers the day’s forecast for Germany, Bäcker gave some background information on the current hurricane situation during the first 42 seconds of the clip.

He begins the segment by reminding us that there is “still a large need regarding research on climate and weather“, adding:

We can of course make everything really easy and say the powerful hurricanes in the current season are caused by climate change. But you just can’t do that. With this you cannot explain the years 2008 – 2015, as during this period there were practically no strong hurricanes in the Caribbean region. It has to do with a number of factors, among them ocean currents are to blame, and you need triggering factors. These are the so-called easterlies.”

Bäcker then explained how this year all the factors are in place and the conditions for producing hurricanes are “optimal”. A refreshingly non-dogmatic analysis, and so hats off to the ARD in this one particular case.

Of course, it didn’t take long for an alarmist rebuttal to be made two days later. And what better person to provide it than a “scientist” from the ultra-alarmist, politically activist Potsdam Institute for Climate Research: Manfred Stock.

A visibly desperate Stock tells viewers that man is mostly responsible for the terrible hurricanes and insists that the PIK scientists have the data to show it. Stock warns that we are at a crossroads (again) and that unless we change our ways quickly and drastically, we are going to see a catastrophe.

Stock added that hurricanes have become worse since 1980. But here he failed to explain the lack of hurricanes in the Caribbean from 2008 – 2015 mentioned by Bäcker and the overall downward trend of the past 100 years.

When it comes to hurricanes, and number of other climate and weather issues, the PIK alarmists have a very pronounced habit of forgetting things and misleading the public.

For example just days ago Stefan Rahmstorf of the PIK claimed that this year’s spate of hurricanes were “unprecedented” – a statement I had a hard time believing. So I asked hurricane expert Philipp Klotzbach at Twitter about this. He replied: 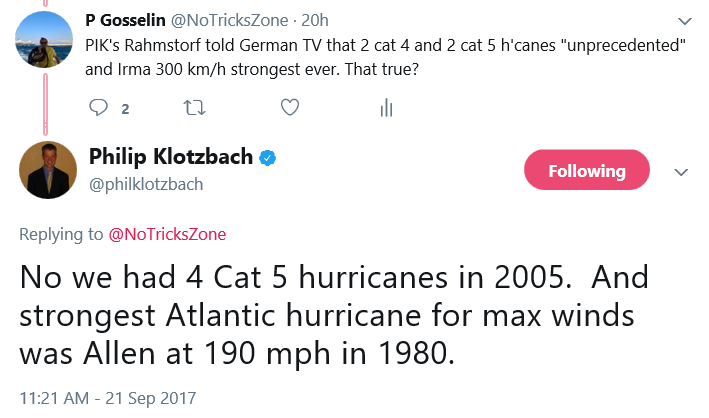 The PIK seems to have a big problem with data selection and processing. Moreover, it’s always either we have to drastically change how we live, and quickly, or we will see planetary disaster. It’s the old playbook used by charlatans again and again throughout the history of civilization.