Browse: Home / 2017 / September / 24 / Germany Expected To Shift To The Right In Today’s National Elections, Green Energies To Take Back Seat

Germany Expected To Shift To The Right In Today’s National Elections, Green Energies To Take Back Seat

Later today I’ll be posting on the result of Germany’s national elections, once it starts coming in this evening. 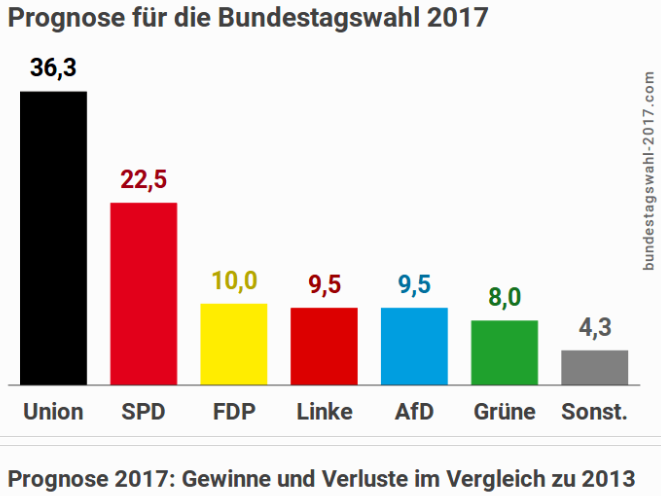 Personally I think the result will be a bit different from what the above prognosis shows. Here’s what I’m projecting:

Overall a rather substantial shift to the right (Union, AfD, FDP) is expected as concerns over immigration, cultural transformation, crime and uncertainty over Germany as an industrial base have swept across the working class.

Such a shift to the right compared to the last election will likely mean tougher times for those pushing environmental, clean energy and climate issues.

Opinion polls, it needs to be pointed out, have shown an usually large number of undecided voters still remaining, and so there’s plenty of room for surprises.

There’s been quite a hit of grumbling among German voters, and many may opt to express their discontent by secretly voting for the AfD. There’s potential of the party coming close to the 15% mark. Such a result would send shock waves across Europe, and force the established mainstream parties to do a quite a bit of rethinking.

4 responses to “Germany Expected To Shift To The Right In Today’s National Elections, Green Energies To Take Back Seat”