Germany’s once highly promoted “Energiewende” (transition to green energies) and the country’s feed-in act have been given a grade of “F” by one of the country’s top economists, Prof. Dr. Dr. h.c. mult. Hans-Werner Sinn.

Just days ago the renowned economics professor gave a presentation dubbed “How much volatile power can the power grid take?” before a packed audience in Munich:

The basis of his presentation is a recent paper appearing in the European Economic Review: Buffering volatility, A study on the limits of Germany’s energy revolution.

In summary, Sinn claims it is unrealistic to believe that Germany can power itself with only wind and sun due to their immense supply volatility and that it is already a huge challenge in itself just to replace coal, oil and gas for producing electricity. Coal, oil and gas for electricity make up only a puny 12.8% of German total energy demand (chart 6:25-mark). He says:

As far as the rest, you can dream about it, but you cannot do it. […] It was disillusionment from the very start, and it’s important that this be made very clear.”

Sinn shows just how volatile wind and solar energies in Germany are, using 2014 as an exmaple. At the time Germany had installed just over 24,000 turbines with a total rated capacity of almost 36 gigawatts: 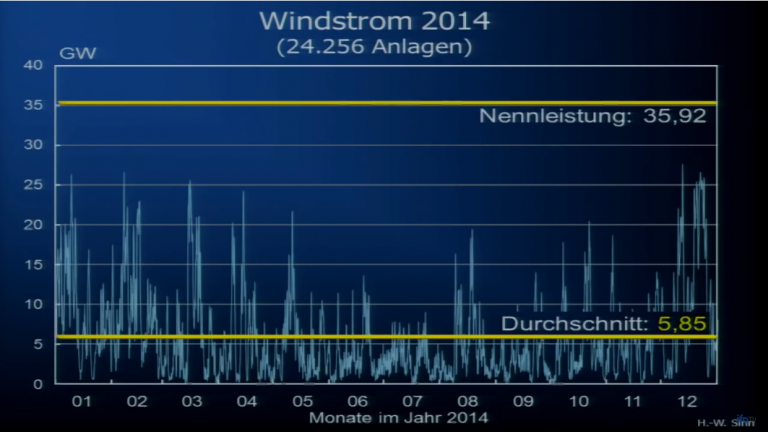 However those turbines delivered on average only 5.85 gigawatts, well under 20%.

“Costs a horrendous sum of money”

The numbers are even more gruesome for solar panel installations, which of course do not function at all at night: 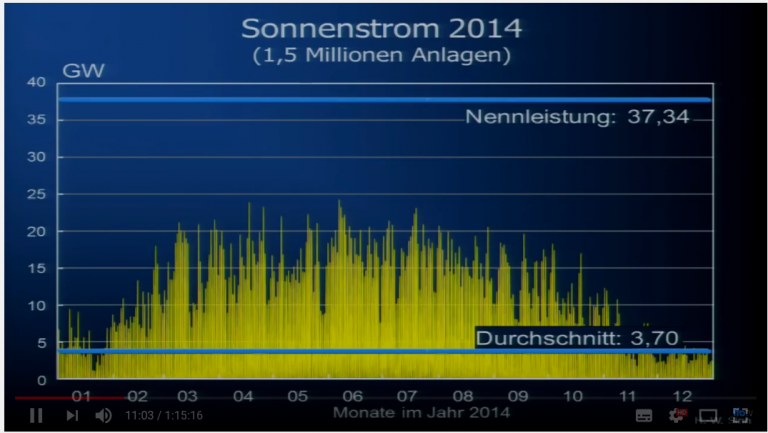 Installed in Germany in 2014 were 37.34 gigawatts of rated solar capacity. Delivered however were merely a tenth of that amount, an average of 3.70 gigawatts. What is does, says Sinn:

It costs a horrendous sum of money, reduces standard of living and blights the landscape. This simply cannot be!”

Sinn’s results are a major blow to the proponents of the German Energiewende and to the notion it is clean, cheap and reliable. As the numbers and results come in, it becoming increasingly clear that the German mega green project is turning into an embarrassing fiasco.

Sinn rhetorically asks whether it’s maybe possible to smooth the supply, i.e. using a variety of strategies such pump-storage and power-to-gas, in order to make the supply more steady, reliable and efficient. His answer is an emphatic no, saying: “It’s an Energiewende to nowhere.”

Even if Germany installed enough capacity to make its supply 100% green, 61% of the output would have to “scrapped” because there would be no use for it, Sinn shows, using a chart at the 55-min. mark.

The public, media and policymakers, however, refuse to acknowledge that the German man-on-the-moon energy project is is big trouble. At his blogsite, Holger Douglas commented on Sinn’s presentation and the failure of the Energiewende:

In the ensuing discussion one of the gravest consequences of the Energiewende emerged: the credibility of science. At almost every single research institute experts have been making every effort to dodge the fundamental laws of physics and nature in order to justify the Energiewende after the fact.”

Sinn also notes he believes the cost of the Energiewende will end up far exceeding the earlier government estimate of 1 trillion euros. Moreover he says that Germany is also transforming its idyllic landscape into a large industrial park.

The Energiewende is one green plan that is backfiring spectacularly on a scale few could have imagined earlier. And in typical German fashion, leaders refuse to acknowledge this and appear as if they would prefer to see the country descend (once again) into ruin before admitting they’ve erred.

This is one presentation that needs to be made in English in other countries that are gung ho on going solar and wind.