At his latest Weatherbell Analytics Saturday Summary, 40-year veteran meteorologist Joe Bastardi lays out what’s behind the next brutal blast of cold and snow that’s coming to North America over the next weeks: 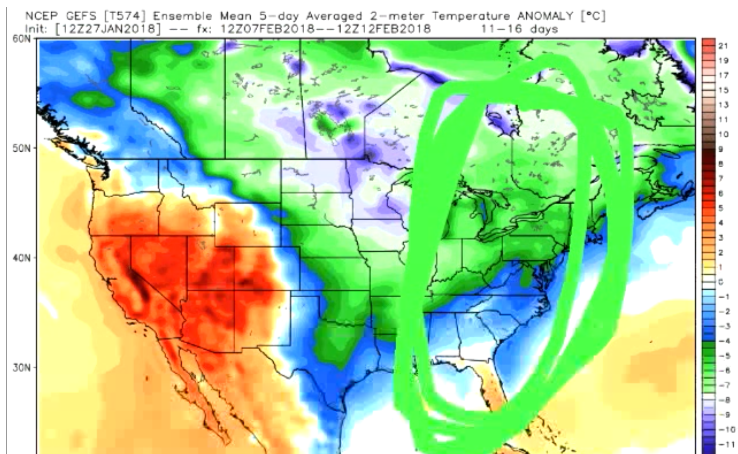 It’s due to naturally occurring cycles, he says.

Yet, as the cold approaches, global warming activists are now feverishly scrambling to blame it on “global warming” in a desperate bid to dampen the embarrassment of their earlier predictions of balmy, snowless winters. They insist that the cold shots are due to global warming disrupting weather patterns.

But Bastardi dismisses the far-fetched, highly imaginative claims, hinting for quite some time that it is mostly politically motivated and a load of nonsense. In his Saturday Summary video the seasoned meteorologist reminds viewers that this has all happened before and is driven by naturally occurring patterns involving ocean surface temperatures and solar activity. It’s all been seen before.

Bastardi also has knocked the alarmists on many occasions for not being able to put out a forecast beforehand, and waiting until after-the-fact to sound off. By ignoring global warming, and instead using natural oceanic and atmospheric cycles, Bastardi had warned weeks and weeks earlier that North America would be hit by severe cold and heavy snow this winter and early spring. “It’s all natural,” he says.

Unlike a number of scientists, Bastardi does not believe the globe is entering a “little ice age” a period of cooling. He feels solar activity over the past 150 years has been too high for too long, and so the accumulated heat will need a lot more time to dissipate before a real cooling period takes hold.

To explain his point, Bastardi shows a chart, but one that is not up to date and thus fails to show the current low activity solar cycle 24. Solar activity has been low for over 10 years. The next 10 years are also expected to see low activity. When using solar activity as an indicator, the cooling of the Dalton Minimum occurred almost immediately. So the debate surrounding the lag will likely remain very much alive.

Interesting trend from CFSv2 over the last several weeks — now suggesting that weak #LaNiña conditions may persist through much of 2018. pic.twitter.com/WWk17bTWCl

That likely means that global warming will remained stalled yet another year. After that solar activity will be close to zero, and so things are going to get even far more desperate for the warmist activists.

13 responses to “40-Year Meteorologist Rejects Warming The Cause Of Brutal Cold Snaps! And: La Nina Conditions Over Entire 2018”